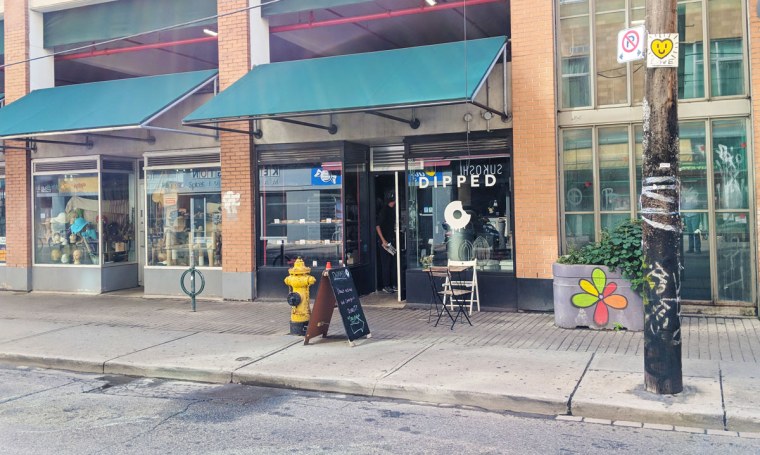 Though Dipped Donuts has been serving their tasty treats at various events throughout the city for a few years, they’ve only just recently opened a permanent outpost in Kensington Market.

They keep things pretty simple; as far as I can tell, they only serve classic raised doughnuts — nothing with a cakey base, and on the day I visited, nothing filled (though they do have filled doughnuts in their rotation).

I tried the blueberry basil, and yeah, it’s good. The doughnut itself is a little bit more dense and chewy than the norm, which is actually quite satisfying.

The glaze was seriously delicious, though I’ll admit that I couldn’t taste any basil flavour.  It was bright and fruity, with a mild tartness and a pronounced blueberry flavour.  It’s also admirably restrained in its sweetness; it’s basically the polar opposite of the in-your-face sugar bombs you’ll find at Krispy Kreme.

Most of the time, I’m ready to tap out from the sweetness after one doughnut.  Here, I could have happily eaten another one (or two).

You can’t go wrong with doughnuts.  Let’s face it: pretty much any time you fry dough and then add sugar to it, it’s going to be good.

So of course, most countries have their own take on the doughnut, because again: you cannot go wrong.  Literally cannot.

Greece’s version is called loukoumades, which is essentially a doughnut hole that’s been tossed in honey and seasoned with cinnamon.  It’s great (at least if the version they serve at Loukoumania Cafe is anything to go by).

I actually liked it a lot more than I was expecting to (and I was expecting to like it).  The loukoumades were hot and fresh, with a pronounced outer layer of crispiness.  The contrast between the crispy exterior and the fluffy, chewy interior was extremely satisfying.

The flavour was great too, with the perfect amount of honey; it’s nice and sweet, but not overwhelmingly so.  And the cinnamon takes it over the top.  It’s fantastic.

They have various sauces and toppings you can add to your loukoumades, but since they’re so great on their own, this seems superfluous.  You also have the option to get them on top of ice cream.  I did this (because I can’t say no to ice cream); it was a huge mistake.

I won’t even mince words: the ice cream was flat-out horrible.  It was cloyingly sweet and thin, with almost zero creaminess.  It was almost as bad as what I recently had at Kiss the Tiramisu, which is saying a lot.

The doughnuts are so good, though.  Just skip the ice cream and get more of them.

I’ve been to Scaddabush a few times now, and it continually surprises me.  Not that it’s anything particularly special, but they serve consistently good food; for a casual chain restaurant in Canada, that’s a minor miracle.

Granted, it’s easy to look good when your competition is dreck like Boston Pizza and East Side Mario’s, but we are where we are.  The bar for a casual chain restaurant is low. 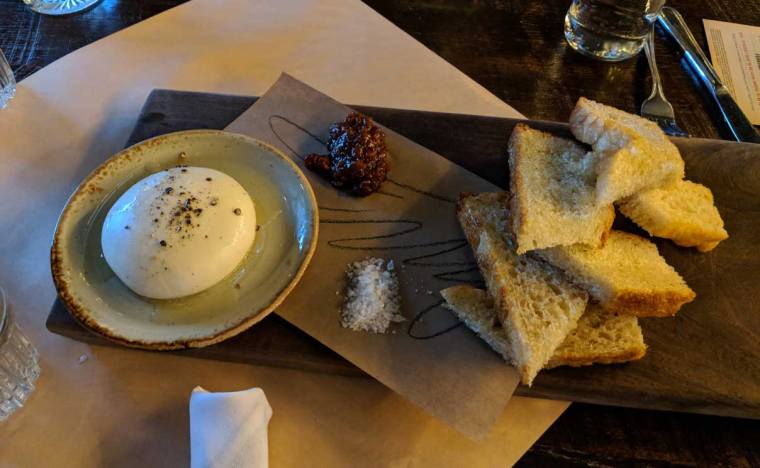 And so Scaddabush, which is very keen to boast that they make their pasta and mozzarella in-house, is comparatively pretty amazing.

The fresh mozzarella is pleasantly toothsome, and with a bit of the sun-dried tomato spread on the side, quite tasty. 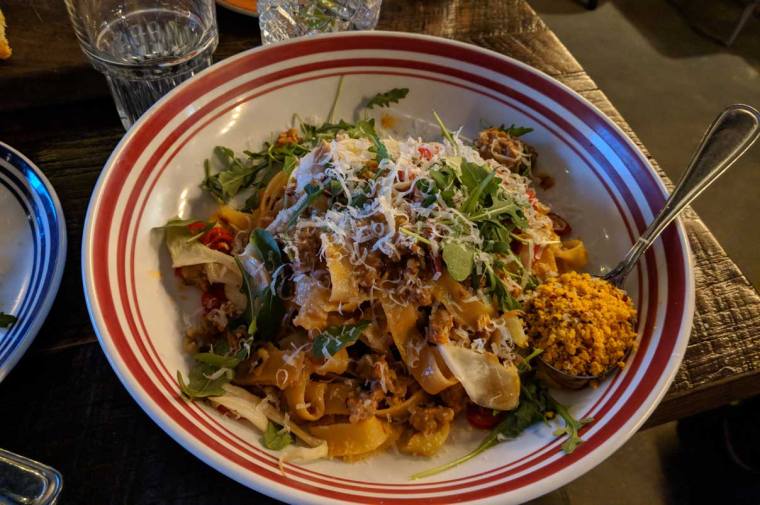 The roasted fennel and sausage fettuccine was one of the better pasta dishes I’ve had in a while, with a really nice interplay between the hearty sausage, the spicy pop of the sliced hot peppers, and the crispiness of the seasoned breadcrumbs.

Alas, the meal ended on a sour note — the zeppoli tasted stale, with a sodden exterior and an unpleasantly sponge-like interior.  The chocolate hazelnut sauce was fine, but was mostly just bland sweetness; there wasn’t much of a chocolate or hazelnut flavour.

As a kid, one of my favourite things about going to Canada’s Wonderland was the ice cream; I’d either get a chocolate-dipped ice cream cone from the place right near the entrance (which, sadly, eventually turned into a Dairy Queen), or if I was feeling particularly hungry, I’d get a funnel cake.

Ah, funnel cakes. What’s not to like? You’ve got the plate-sized piece of delicious criss-crossed fried dough, the icing sugar, the very sweet strawberry-chunk-infused strawberry sauce, and finally, a heaping mound of soft serve ice cream.

No, it’s not fine dining, but if it doesn’t put a smile on your face, then I don’t even know what to say to you. You’re dead to me.

I almost never find myself at Canada’s Wonderland these days, so my funnel cake cravings have gone unfulfilled.

Imagine my delight when I found out that Dairy Cream in Mississauga serves a Wonderland-esque funnel cake, and that their version is just as it should be. The warm, freshly-fried dough, the strawberry sauce, the above average creamy soft serve: it’s all here.  It’s nothing mind-blowing, but if you’re looking for a mind-blowing funnel cake, you’ll probably be searching for a while.

I’m going to be honest: I like BeaverTails (cinnamon and sugar BeaverTails, to be specific) far more than I should probably admit. There’s not a whole lot to them — it’s just a big, flat piece of dough that’s deep fried, buttered, then dipped in a mixture of cinnamon and sugar. That’s it.

Crispy and crunchy in spots and fluffy in others, combined with just enough cinnamon and sugar to make it sweet but not cloyingly so, it’s so damn good. I can’t resist it. There are other, similar fried dough options (mini doughnuts, churros, etc.) but BeaverTails are king.  There’s just something about the irregular shape of the dough, which gives it textural contrast, that makes it irresistible.

I’m actually glad that there’s no permanent BeaverTails outpost in Toronto, because I’d be eating there all the time. I would live there. They would know me by name. I would die of a heart attack within a couple of years. It would be a life well lived.