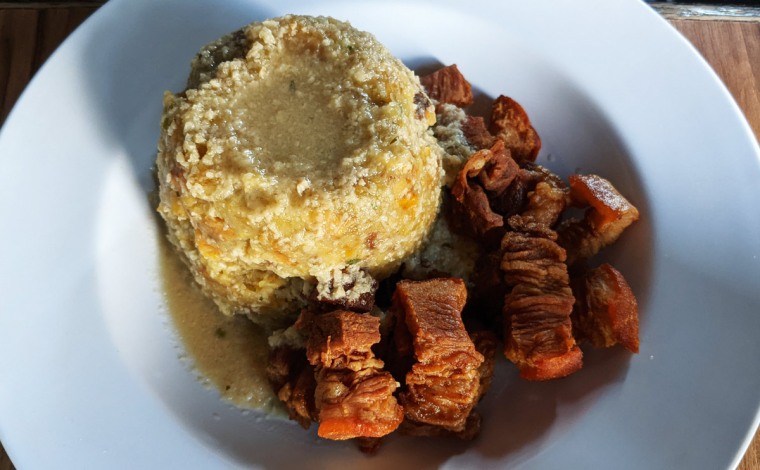 After realizing that I had never tried mofongo — a Puerto Rican dish in which plantain is mashed with garlic and crispy pork skin — I quickly discovered that Aquarela is pretty much the only game in town.  Thankfully, they seem to be doing a pretty great job of carrying the torch for the dish in the GTA; I have nothing to compare it to, but it’s tasty, that’s for sure.  It’s rich, creamy, garlicky and abundantly delicious.  It’s kinda like mashed potatoes on steroids.  It also comes with your choice of meat; I went with the crispy pork belly, and yeah, that’s a great combo.  Something to cut through the plate’s overwhelming fatty richness would have been nice, but that’s a minor complaint for a very tasty dish. 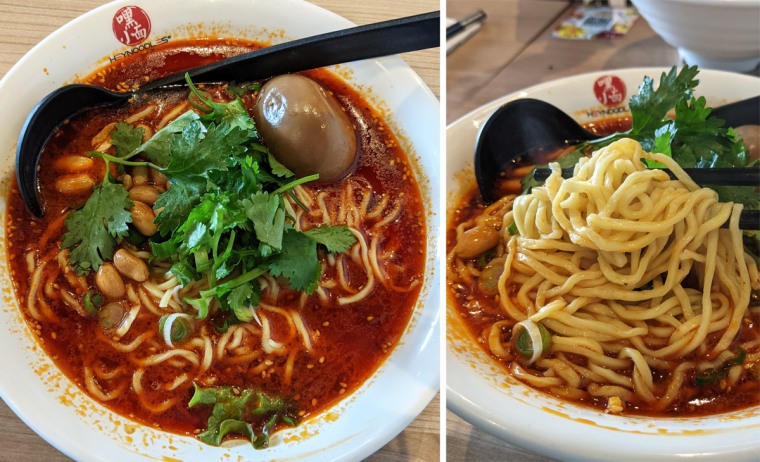 The noodles at Hey Noodles are great (as you’d hope for from a place with “noodles” right in the name of the restaurant), but what really blew my mind was the price.  I ordered the Chongqing Street Noodles, which is a very large bowl of soup that’s absolutely crammed with noodles, and that somehow only costs $6.99.  The egg was an extra dollar, but even still, that’s a fantastic deal, especially considering how tasty it is.  The noodles are nice and chewy, and the soup is delightfully zingy, with that addictive combo of spiciness and numbing heat that you get in this style of Chinese cuisine. 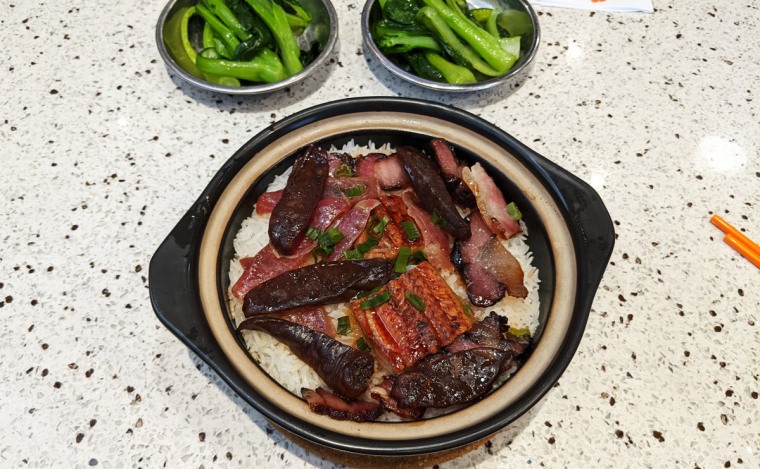 Clay pot rice is an extremely simple dish — it’s basically just plain white rice that’s topped with meat and cooked in the eponymous pot, which makes the bottom layer of rice nice and crispy.  It’s simple, but immensely satisfying when done well.  The one I ordered was  topped with eel and various meats and sausages, and yeah, it’s super satisfying.  The fluffy/crispy rice, the tasty meats, and the sauce they have on the side (which was in a soy sauce container, but I’m fairly certain was more than just soy sauce) was a great combo.

I ordered the Hand-Made Noodles, which comes spicy or non-spicy with your choice of topping (beef, ground pork, pork intestines, Chinese pickle, or chicken).  I went spicy with ground pork, and yeah, it’s good. 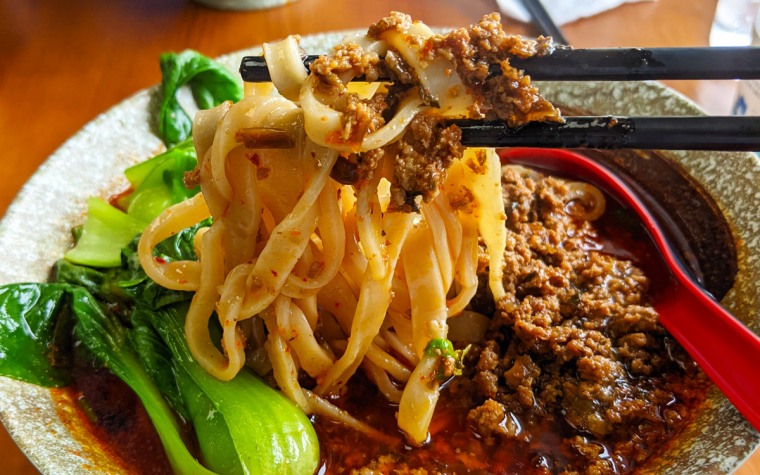 Those noodles are great — they’re thick, chewy, and satisfying.  The soup is mildly spicy and has a nice zippy flavour, and the generous amount of tasty ground pork complements it perfectly.

I wish there had been some chili oil on the table — the soup was spicy, but could have been kicked up a bit — but aside from that it was a top-notch bowl of noodles.

Pho Ngoc Yen is one of those restaurants that must rely pretty much entirely on word of mouth; hidden away in an industrial neighbourhood in Mississauga, it’s basically in the middle of nowhere.  The odds of you stumbling onto it are quite miniscule. 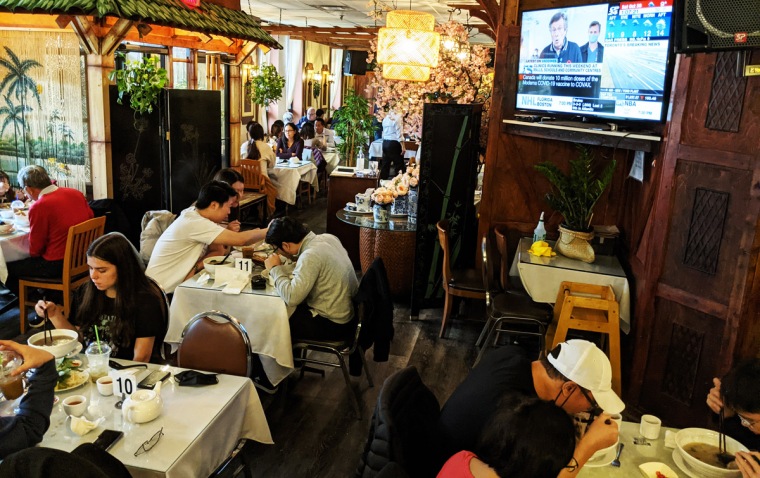 But yeah, it’s definitely got the word of mouth that it needs, and I can see why — it’s great.

I got the Pho Ngoc Yen Dac Biet, which the menu describes as “NY’s special: rare beef, beef balls and boneless beef shank with rice noodles.” 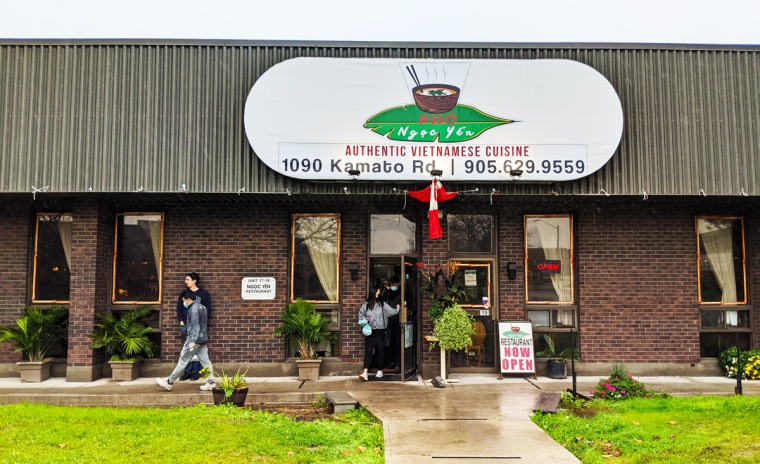 It’s a great bowl of pho.  The generous amount of meat is tender and tasty, and the broth is beefy, richly spiced, and thoroughly delicious.  The noodles were slightly on the soft side, and my bowl was missing the beef balls, but the broth and the beef were both so tasty that this never felt like a big issue.

I noticed after the fact that Tondou Ramen bills itself as “the one and only Okinawan restaurant in Toronto.”  That being the case, I probably should have ordered the Okinawa soba instead of the shio ramen.  Oh well. 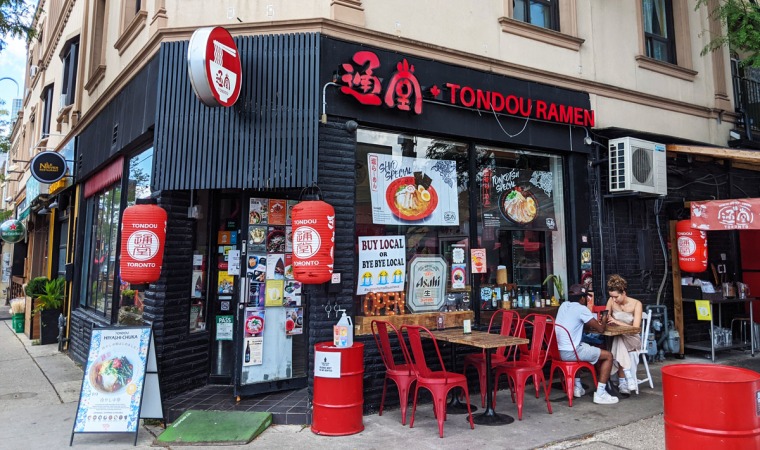 Still, the shio ramen was mostly quite tasty, with a fairly large caveat that, to be fair, mostly applies to me and weirdos like me.  Specifically: people who hate raw onion.

I’m a card-carrying raw onion hater, so you can take all of my opinions on the matter with a grain of salt, but the ramen here was a bit much.  It’s topped with the usual green onion (which I’m normally okay with) along with a generous amount of sliced white onions, and it’s onion overload. 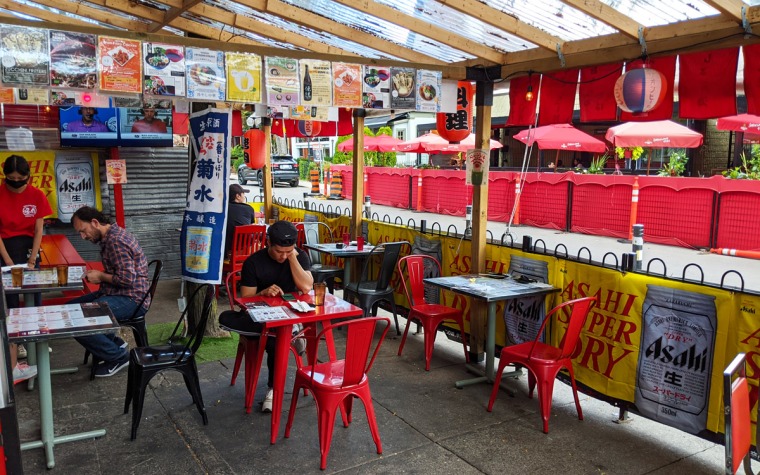 The problem is that the soup itself, which the menu describes as a “light chicken broth,” has such a subtle flavour that it can’t help but be overwhelmed by the raw onion assault.  It’s all you can taste.  It completely overpowers the delicate broth.

Still, everything else about the bowl was quite good, particularly the perfectly chewy fresh noodles.

I also tried the takoyaki (A.K.A. octopus balls), which was very good; oddly, the balls are deep fried (is that an Okinawan thing?), which gives them a delightfully crisp exterior.