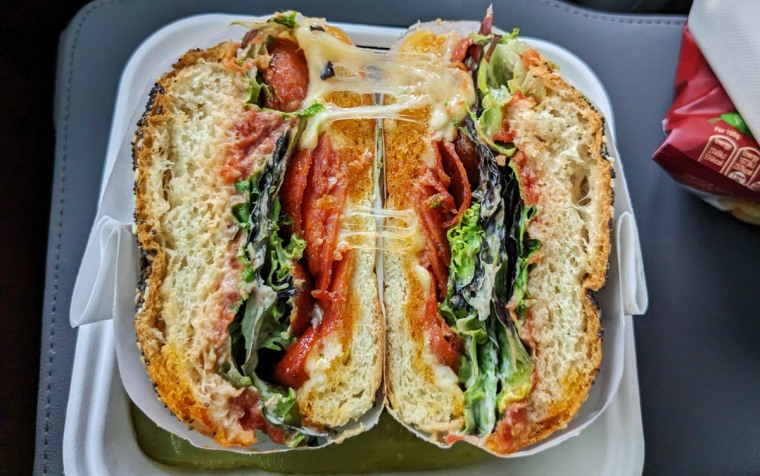 I think the word “genius” is frequently misused.  A lot of people given that label are probably very good at what they do, but not necessarily a genius.

That being said, they’re serving a sandwich called “The Caesaroni” at Vilda’s, and whoever invented it is a genius.  That’s just a fact.

The Casaroni, as per the menu: “Pepperoni pizza and caesar salad living in harmony inside a bun. Tomato Sauce, shredded mozzarella, pepperoni and romaine tossed in caesar dressing. Delicioso!” 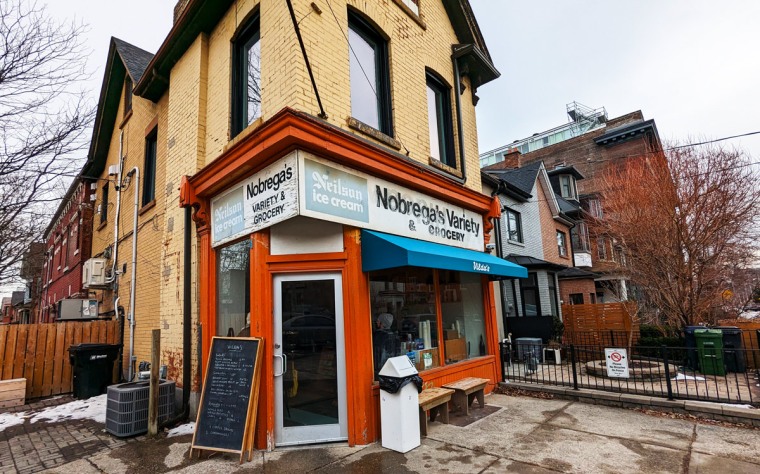 It’s the type of thing that seems so obvious in retrospect.   But would I have come up with it myself?  Doubtful!  Because I’m not a genius.

And it’s just as great as you’d hope, with an absolutely delightful combo of gooey cheese, flavourful sauce, meaty pepperoni, and zippy Caesar-dressed romaine.  It’s like you’re eating a slice of pepperoni pizza and a Caesar salad at the same time.  I could see a lesser version of this sandwich coming off as gimmicky, but this is legitimately delicious. 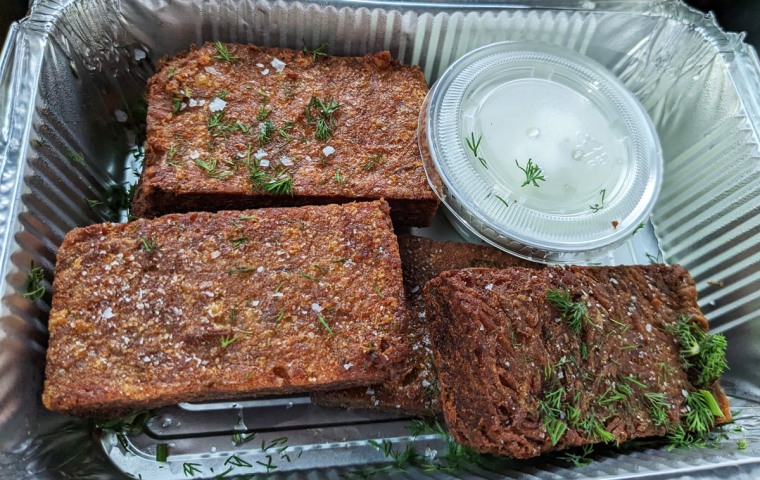 I also tried the latkes, which comes with an order of five brick-like latke rectangles.  It’s far from traditional, but it features an outstandingly crispy exterior and a creamy interior; it’s great. 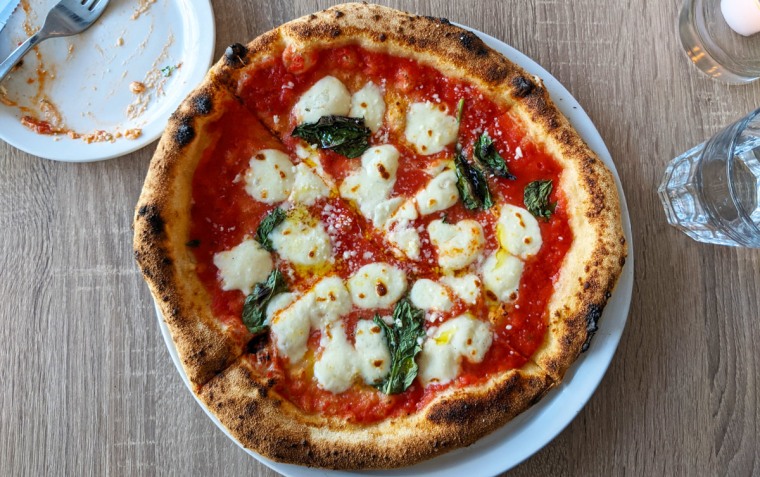 Margherita pizza from Pizzeria Via Napoli

I suppose you could order something from a Neapolitan pizza joint that isn’t a margherita pizza, but why would you?  As I’ve mentioned before, it’s the perfect food.  It’s also a great test of a restaurant’s chops, because it’s so simple that if your technique isn’t on point, and if the ingredients you’re working with aren’t great, it’s going to show.  Pizzeria Via Napoli’s version absolutely hits it out of the park; the crust is flavourful, perfectly chewy, and has a good amount of char on its exterior (including the bottom of the slice).  And the other ingredients are just right.  Margherita test: passed! 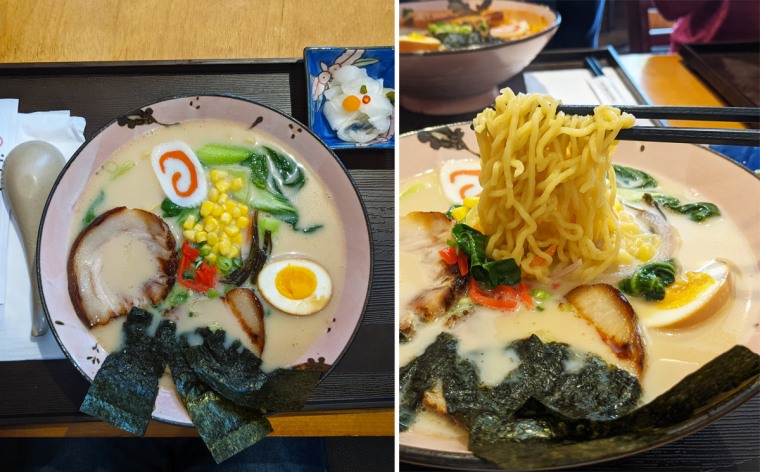 Speaking of food that’s perfect: ramen.  It’s the best.  I ordered the tonkotsu ramen from Ikkoi (they serve several other styles of ramen, along with sushi and other Japanese standbys), and it’s pretty decent.  Is it the best bowl of ramen that I’ve ever had?  No; their menu is so broad that they’re probably spreading themselves a bit thin.  But there’s also absolutely nothing wrong with it.  I wouldn’t go out of my way for it, but if you’re in the area and you’re craving a bowl of ramen, it’s worth a shot. 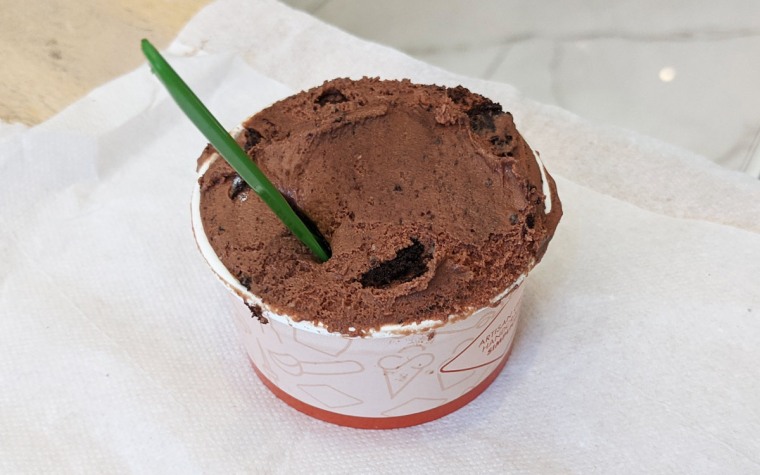 Nani’s continues to be great.  I don’t particularly feel the need to write about Nani’s every time I eat there, because I think it’s fairly clear by this point that I think Nani’s serves some truly stellar gelato.  But I would like to note that, even though it’s not technically on the menu, Nani’s does have a kids size cup that’s pretty much the perfect amount if you’re not super hungry.  It’s the same size cup as the small, but the gelato pretty much only goes to the brim instead of being mounded way up.  I’m not sure why they don’t advertise this size, but I’m definitely glad I know it exists.  And now you do too! 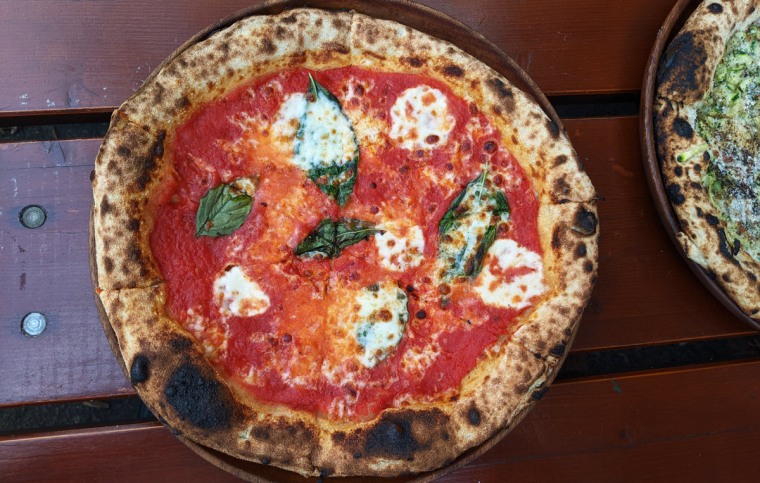 The Hole in the Wall is a delightful little spot in the Junction (with a fairly generous streetside patio) that specializes in various sourdough shenanigans: they’ve got sourdough loaves, sourdough bagels, and what I ordered — sourdough pizza. 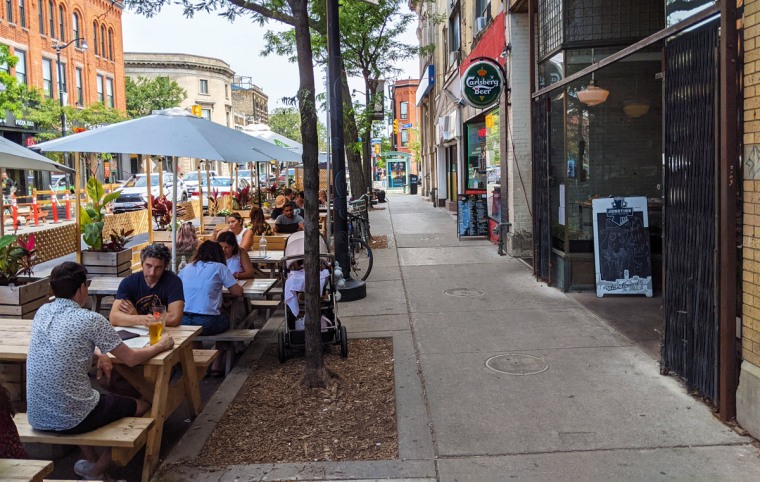 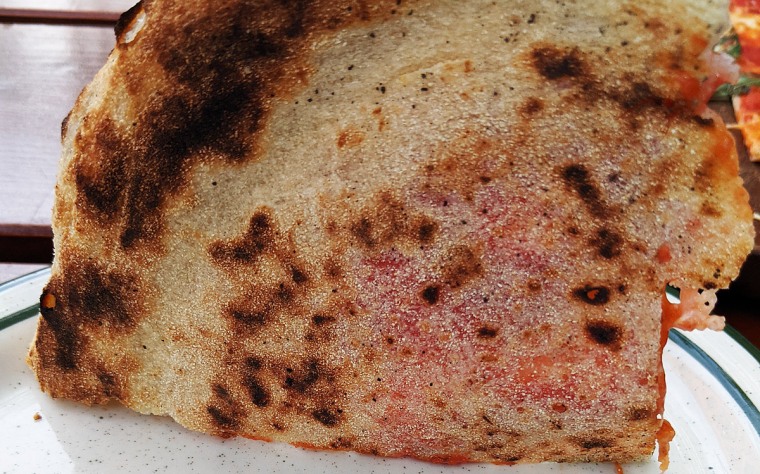 They were both delicious.  As you’d expect from a place that specializes in sourdough, the crust was stellar — it’s got a great balance between fluffiness and chewiness, and a nice sourdough flavour that really pops.  It’s a crispier than a standard Neapolitan-style pizza, but it totally works. 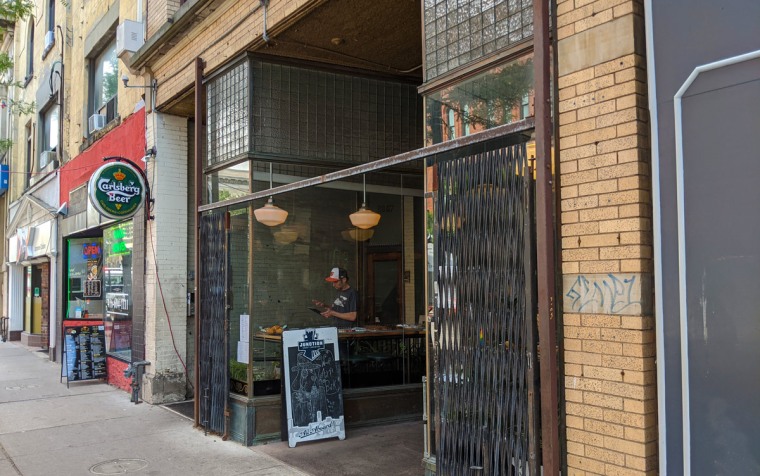 It’s also very aggressively charred, but it never crosses the line into burnt territory.  The char adds a subtle bitterness that contrasts nicely with the more flavourful dough. 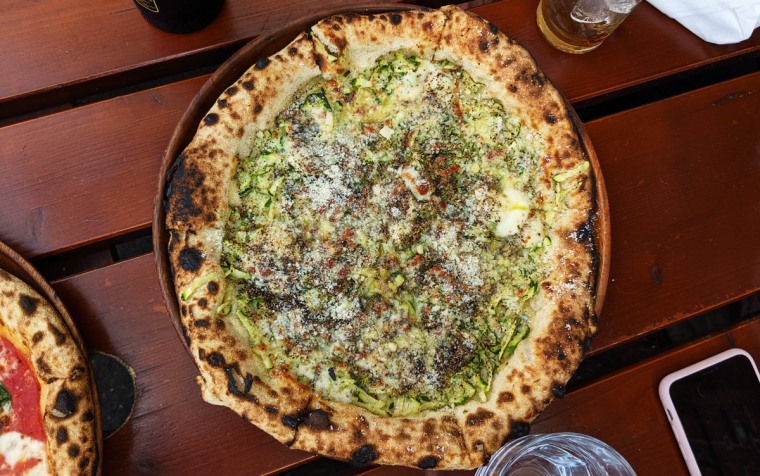 As for the pizzas themselves, they were both great (and translating the creamy, peppery bite of cacio e pepe to a pizza is actually fairly ingenious), though not surprisingly, I preferred the margherita.  I’ve said it many times before — I think a good margherita pizza is a perfect food, and this was a very good one. 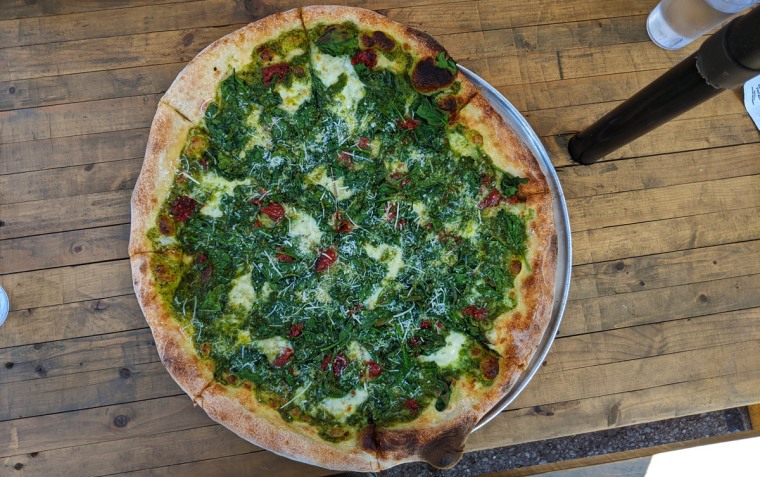 Though I’m all about the simple joys of a margherita pizza, occasionally, a more interesting assortment of toppings can be just what the doctor ordered.  Case in point: the Green Out pizza at North of Brooklyn, which comes topped with “Mozzarella, Spring Cream, Spinach, Semi-Dried Tomatoes, Salsa Verde, Pecorino.”  It’s about as far from the simplicity of a margherita pizza that you can get, but it’s so, so good. 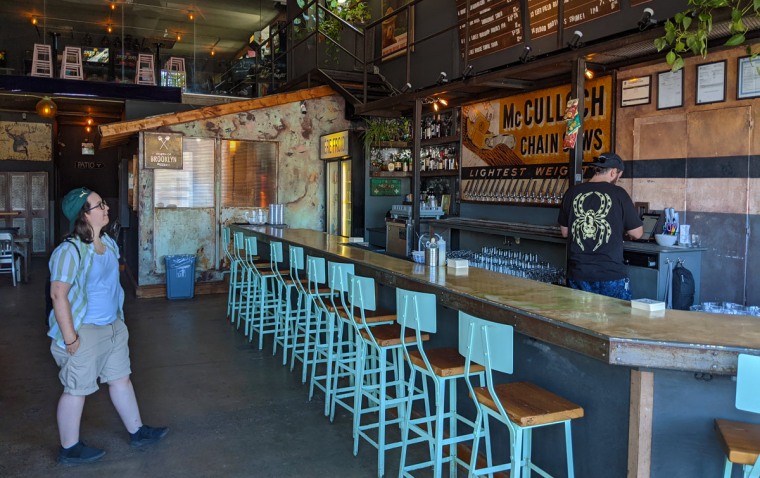 “Green” is right there in the name, and yeah, the abundant spinach and herby spring cream (which is basically cream with herbs mixed in) definitely gives the pizza a verdant glow.  It looks like it might be overwhelming, but it’s just right — the tender spinach balances so well with all the other ingredients. 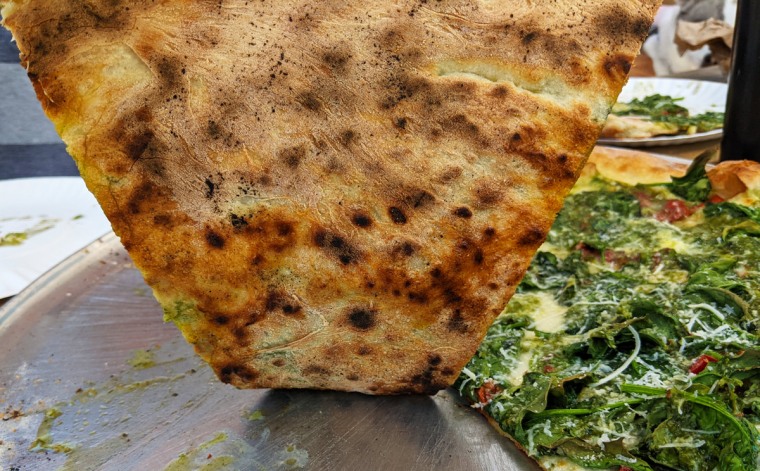 The hearty spinach, the pops of sweetness from the tomatoes, the zinginess from the salsa verde, the gooiness of the mozzarella, and the saltiness of the pecorino is just a perfect storm of deliciousness.  It’s surprisingly great. 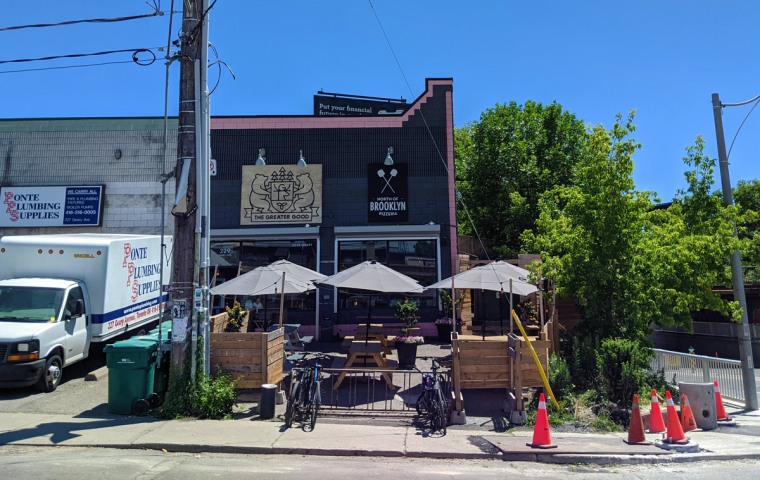 But a pizza lives and dies by its crust, and that’s where this thing really shines.  It’s super thin and crispy, but not even remotely crackery — it’s got a great balance of chewiness and crispiness, with a surprising amount of substance given how thin it is, and a great flavour.  It helps that it’s perfectly cooked, with a nice even char that never overwhelms.  The toppings are all extremely tasty, but it’s the superlative crust that really puts this in the pizza stratosphere. 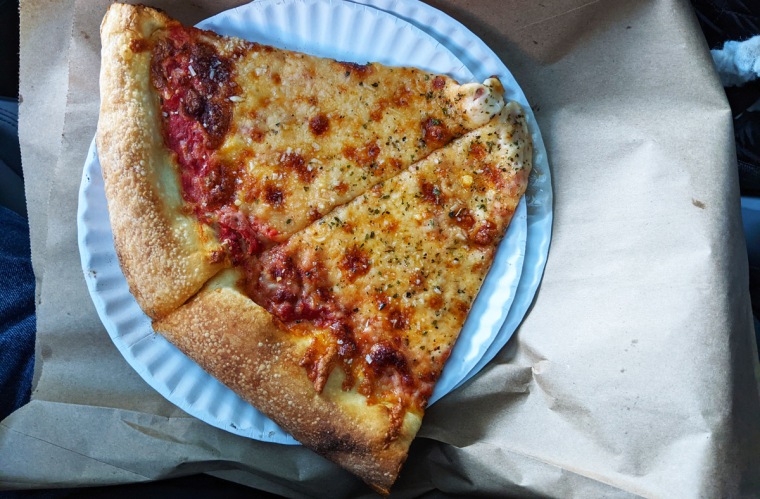 Superpoint!  It’s still great.  This time I got a plain cheese slice, and it’s absolutely phenomenal — it’s got the perfect amount of gooey cheese, tasty sauce, and that nicely crispy/chewy thin crust.  Pizzeria Badiali is right nearby also serving up top-notch slices, and I’m extremely envious of anyone who lives in the area because they’re both so good. 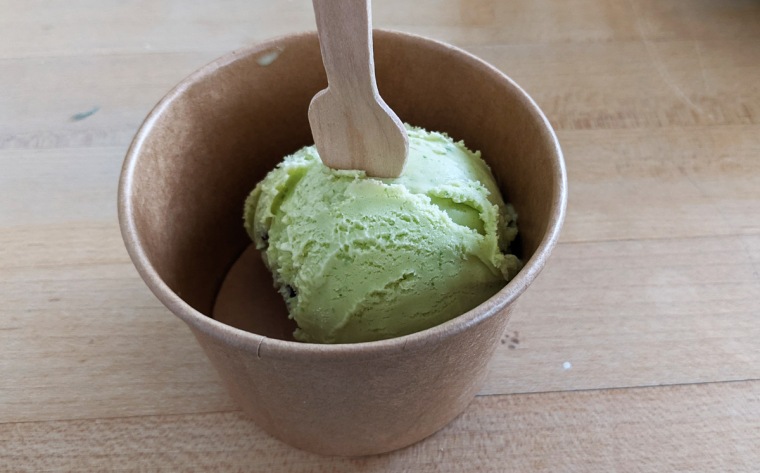 Easily the weirdest scoop of mint chocolate chip ice cream I’ve ever had — it didn’t taste like mint or chocolate.  If I had eaten this blind, I honestly don’t think I would have guessed mint.  It tastes more like a mild key lime pie.  It’s not bad, it’s just weird when you’re expecting mint.  As for the chocolate, I’m of the opinion that standard chocolate chips are useless in ice cream.  They have a nice crunch, but nothing else — frozen chocolate chips are too cold to properly melt in your mouth, so they basically just crumble into little bits that you can’t taste. 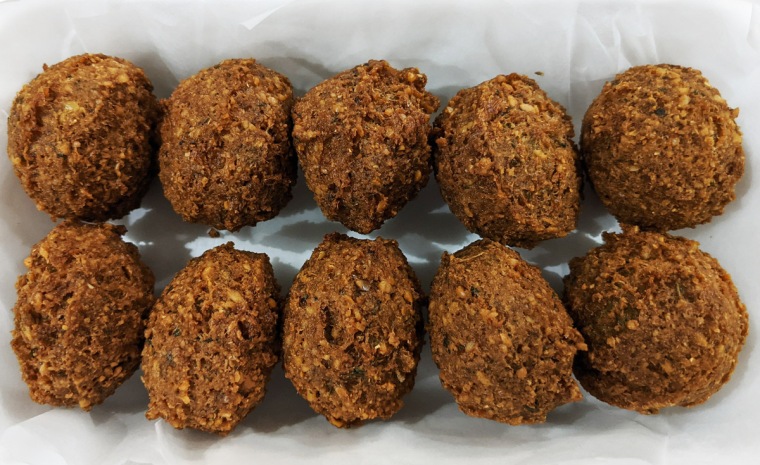 Falafel from Falafel Plus

If you have “falafel” right in the name of your restaurant, you’d better be able to back that up.  I’m happy to say that Falafel Plus very much backs that up: the falafel here has a great balance between crispy exterior and fluffy interior, and it’s perfectly spiced, with a herby flavour that’s very satisfying.  Clearly, I’m going to have to return and try a bunch more stuff, because they have a fairly extensive menu, and based on the falafel it’s probably all tasty.