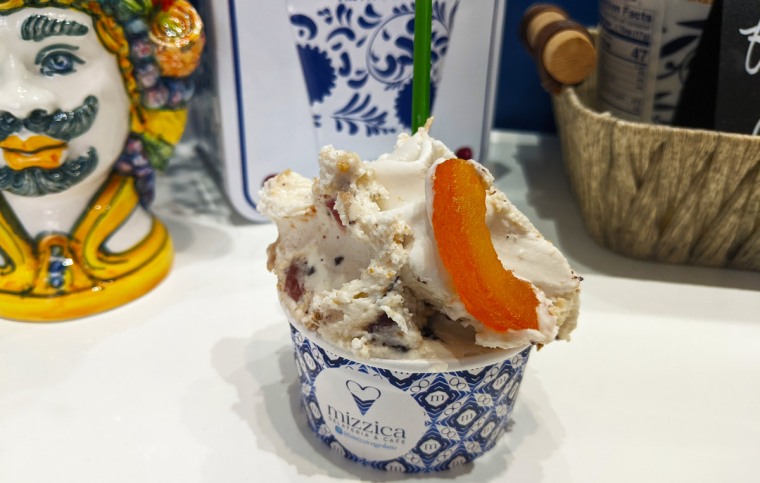 The first thing you see before you enter the door at Mizzica is a big banner with the various awards they won at the Gelato Festival World Masters, which certainly seems like a promising sign. 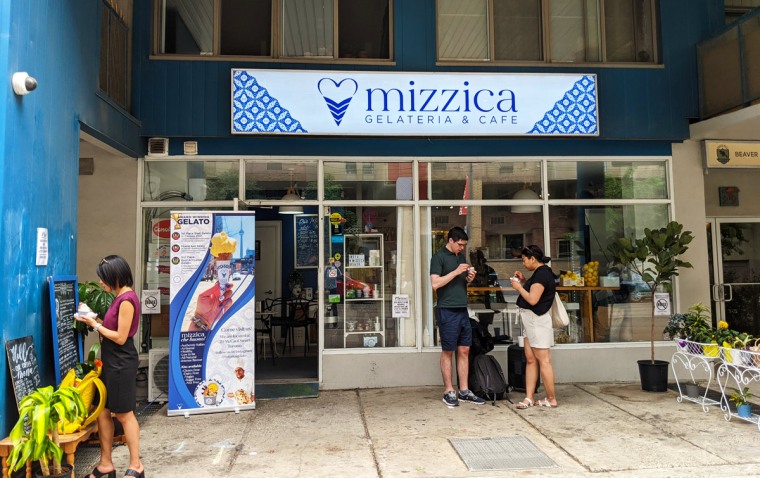 And then you try the actual gelato, and it’s pretty clear why they won those awards — holy moly it’s good, please give them all the awards. 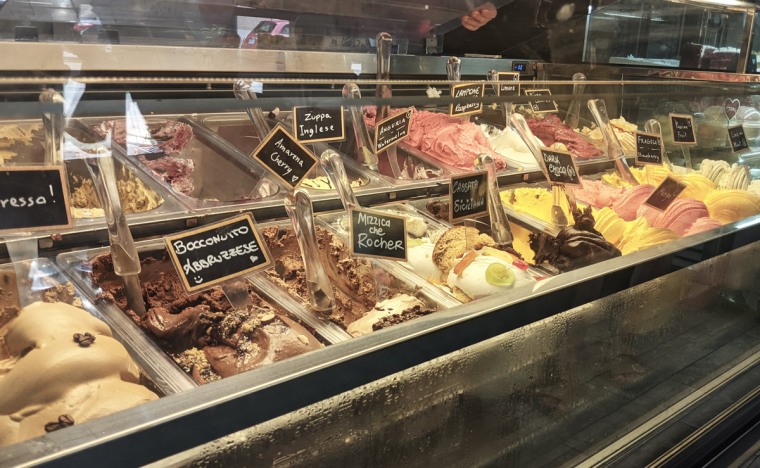 They have a bunch of delicious looking flavours, but I went with the Cassata Siciliana, which is based on an Italian dessert of the same name (which is basically a boozy cake filled with candied fruit and creamy ricotta). 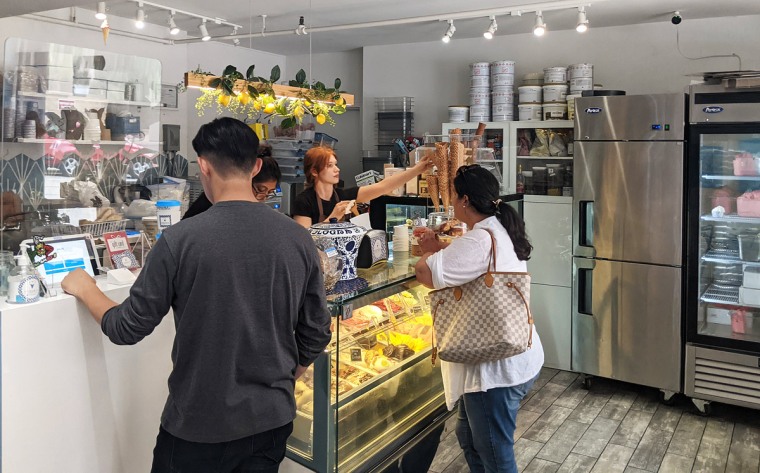 It’s so good.  It’s filled with chunks of cake, dark chocolate, candied fruit, and sweet ricotta, and everything about it is crazy delicious.  The balance of all the ingredients is just right, and the gelato itself is super smooth, rich, and creamy.  I was wondering if they could keep up that stratospheric level of quality; I’ve been back a few times since this particular visit, and yeah, this place is the real deal.  It’s some of the best gelato in the city. 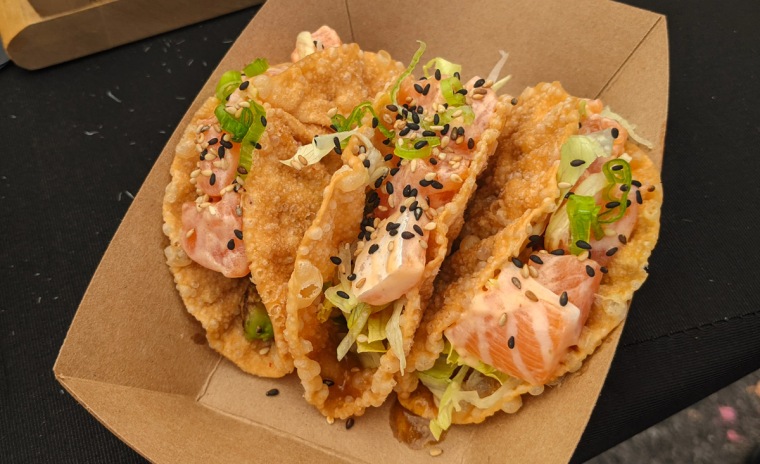 If you haven’t checked it out yet, Smorgasburg is a local offshoot of an American outdoor food festival, and finds a whole bunch of tasty-looking eats crammed together near the waterfront.  The vendors have been curated by food writer Suresh Doss, which means that unlike at a lot of food festivals like this, it’s a safe bet that everything is as good as it looks.  And there’s a lot of good-looking food on offer, with dozens of vendors each serving up a handful of tempting dishes. 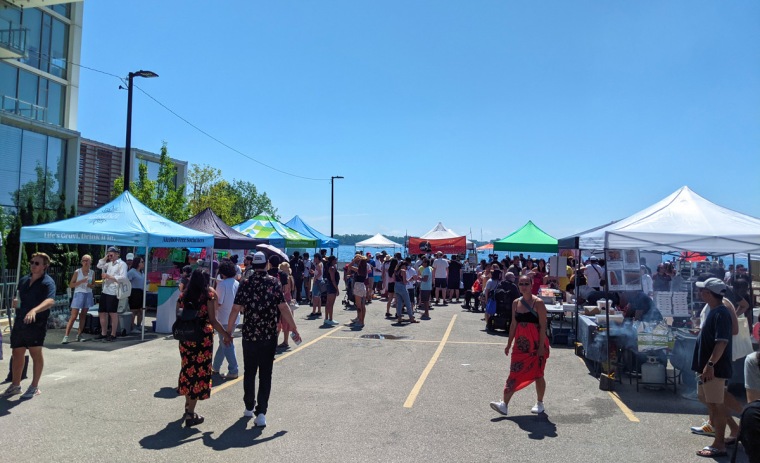 I got a couple of things from Nozomi, who describe themselves as serving “Asian inspired comfort food,” and yeah, it was top-notch. 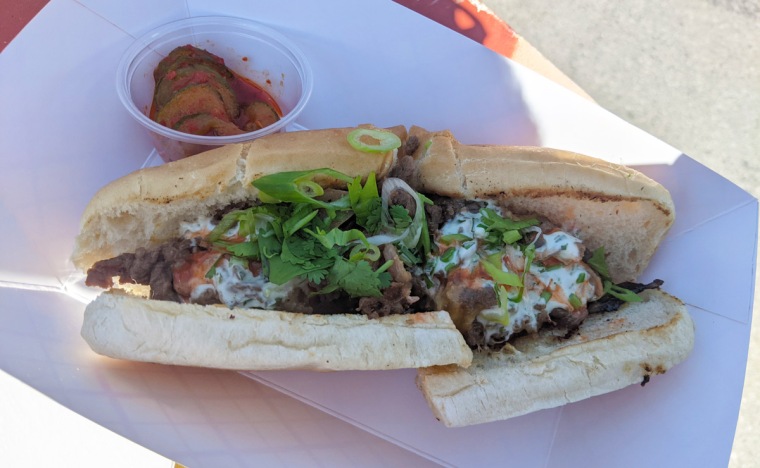 I tried a couple of things.  First up is the bulgogi kimchi cheesesteak, which is exactly what you want it to be.  Sometimes fusion dishes can feel a bit like they’re cramming together two things that probably didn’t need to be combined, but everything here really works: the flavourful beef, the gooey cheese, and the zingy kimchi all go perfectly together.  The soft roll does a great job of holding it all together without getting in the way.  It’s a great dish. 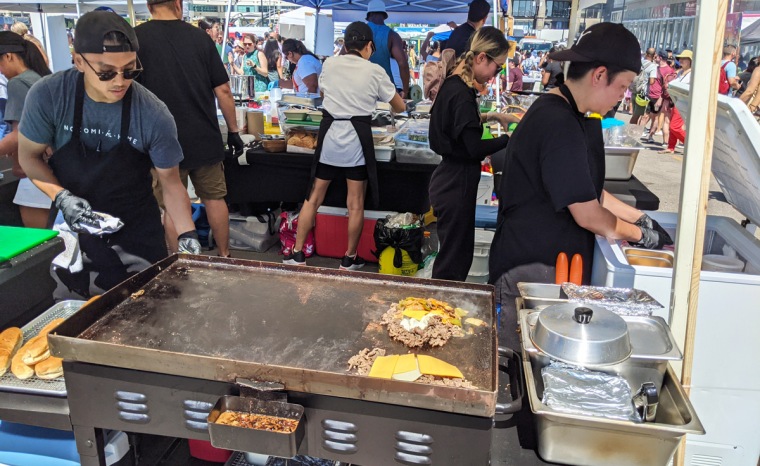 The other thing I tried is a dish they call “pocos,” which based on my attempts to google this, seems to be something they made up.  It’s basically a poke taco (it’s filled with salmon and seaweed), but with a crispy wonton-style shell instead of a tortilla.  It’s super tasty, with the tenderness of the sauce-coated salmon contrasting very nicely with the crispy shell.  Like with the cheesesteak, it takes something that could have come off as gimmicky and unnecessary, and makes it absolutely delightful. 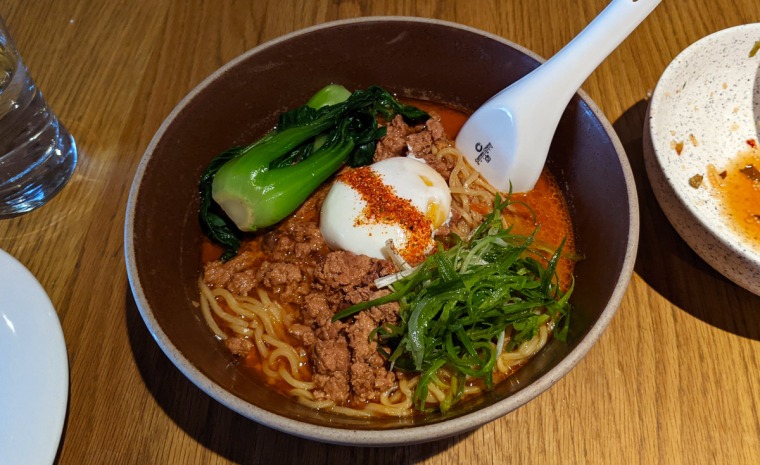 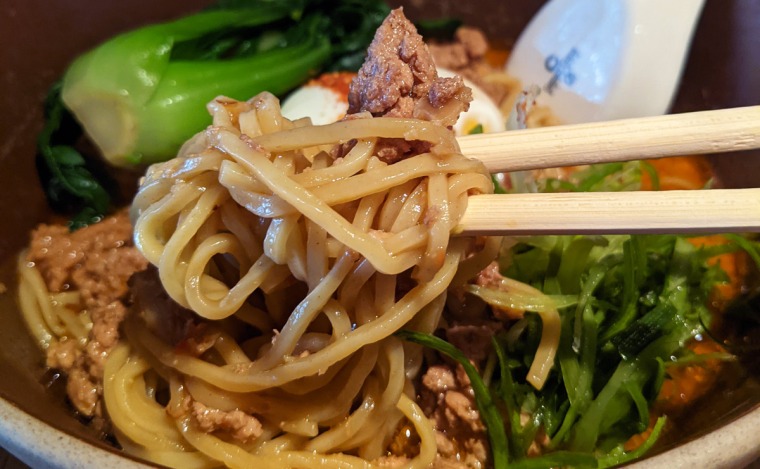 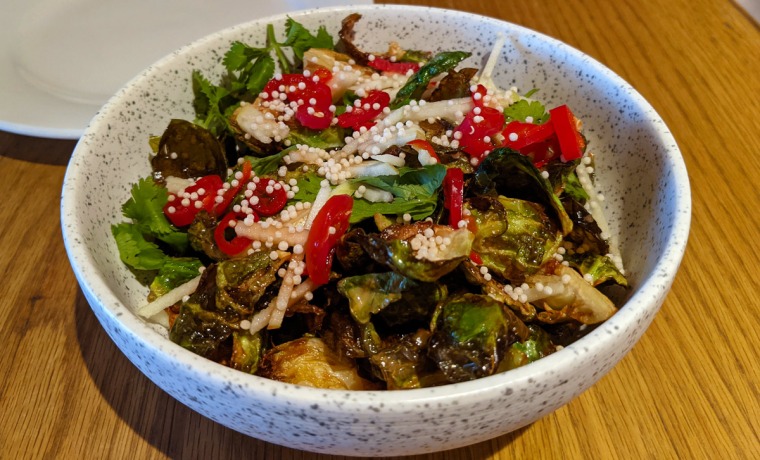 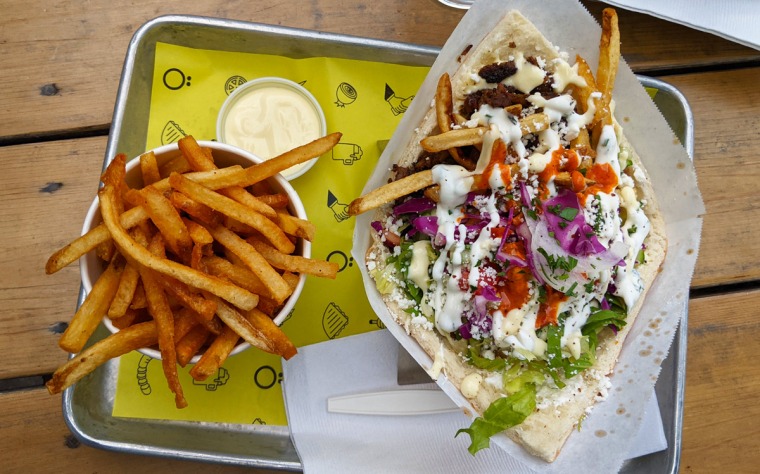 I tried Otto’s Berlin Doner around when it first opened and quite enjoyed it; I’m happy to report that not only has the place not missed a step, I think they’ve actually gotten better.  I just had the veal and lamb doner, and I was pretty blown away by how good it was. 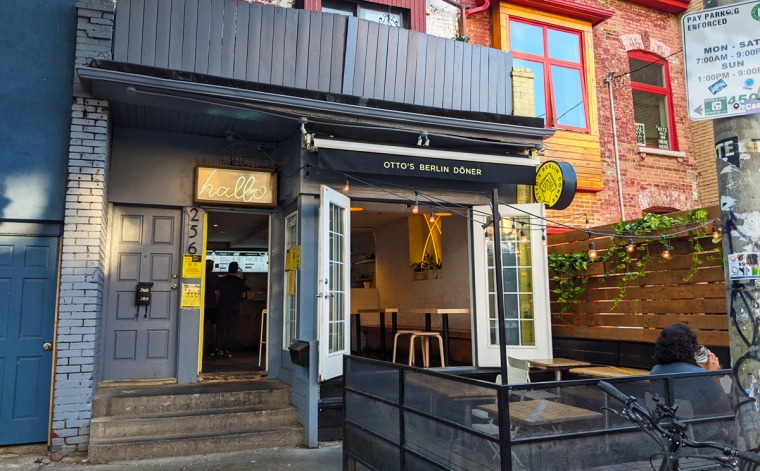 Every element works so well — it’s got that great bread, which is delightfully crispy on the outside and fluffy on the inside, and it’s got the perfect balance between tasty meat and fresh veggies, with the sauces all complementing it so well.

You can choose between garlic, yogurt, and hot sauce — or you can do what I did and get all three, which is definitely what you should do because it’s a very tasty combo (the hot sauce isn’t hot at all, but it’s hard to complain when it’s all this tasty). 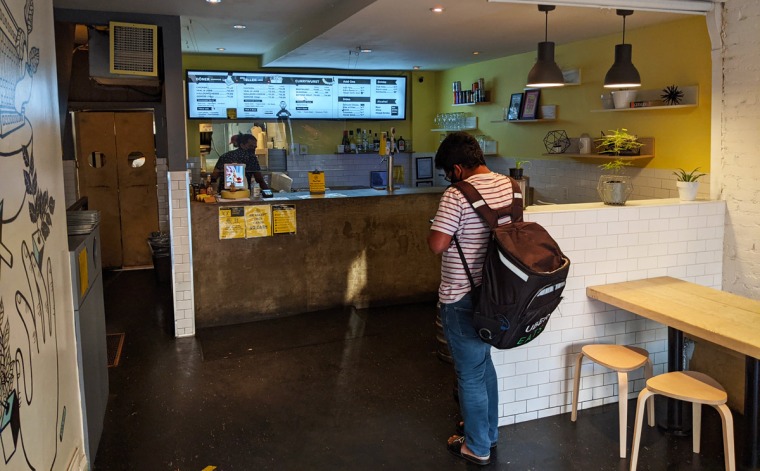 But it’s the veal and lamb that really makes the sandwich sing.  It’s super tender, with a great meaty flavour from the lamb and a punch of rosemary-tinged herbiness.  And it’s absolutely crammed with the crispy bits that make a sandwich like this so addictive.

I mean, look at this picture.  Look at the crispy bits.  That’s a thing of beauty.

You can also add feta cheese and/or fries to your sandwich for a buck a piece, and again, you should definitely do that.  The fries add more delightful savoury crispiness, and the feta brings creamy pops of saltiness that really rounds out the sandwich. 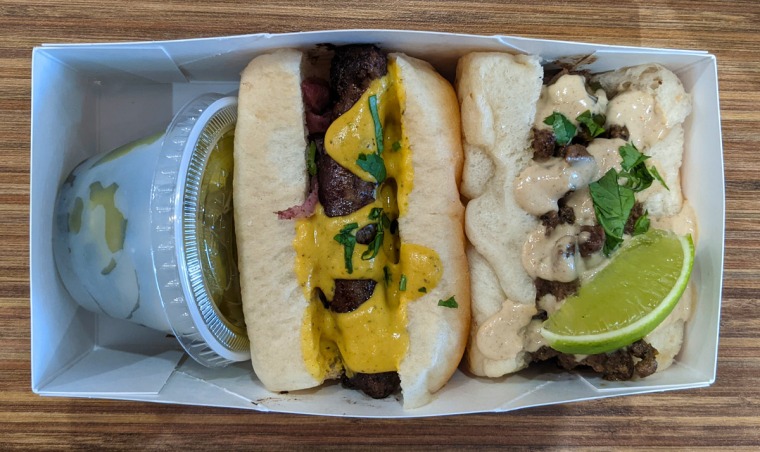 Tut’s is a bit of an odd one; the menu features a variety of Egyptian sandwiches, but instead of being served on the pita bread you’re expecting, they’re served on soft, squishy buns that are similar to the potato rolls you’ll find at so many burger joints around the city.

It’s not the most traditional choice, but hey — tasty is tasty, and yes, the sandwiches here are quite good. 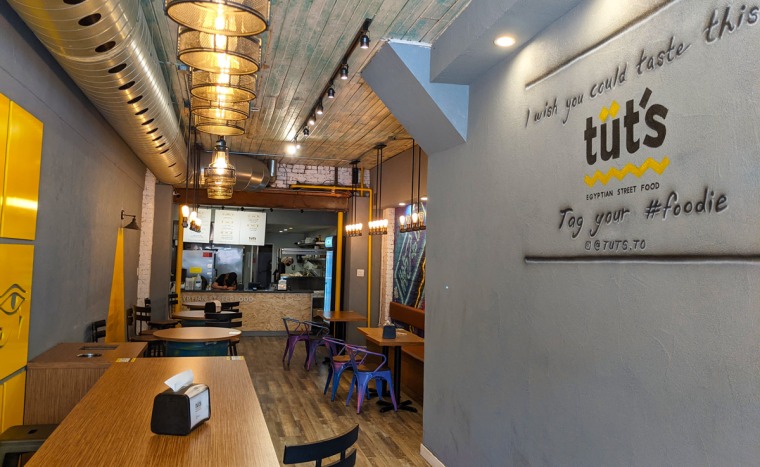 A combo comes with two sandwiches and a side; I went with soguk (sausage) and kebda (pan-fried beef liver).

Both were really good.  Soguk (more commonly spelled sojuk or sujuk) is a very distinctively-spiced Middle Eastern sausage, and while the one they’re serving here has a much milder flavour than any version I’ve had before, it’s tasty nonetheless.  It comes topped with what they’re calling caramelized onions (they tasted more pickled than caramelized to me) and mustard mint sauce.  That sauce, in particular, is nicely zippy and really brings the sandwich together. 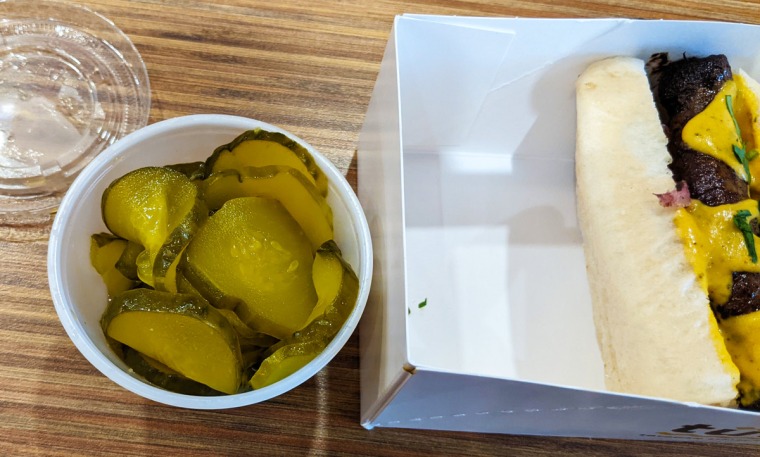 The liver comes topped with tahini sauce and a lime wedge for spritzing; like the sausage, it has a surprisingly mild flavour, but it’s tender, meaty, and delicious.  Even if you’re normally iffy on liver, this sandwich might surprise you — it’s really good.

And the soft, fresh, and slightly sweet bun works surprisingly well.  I thought I might miss the pita bread, but I did not. 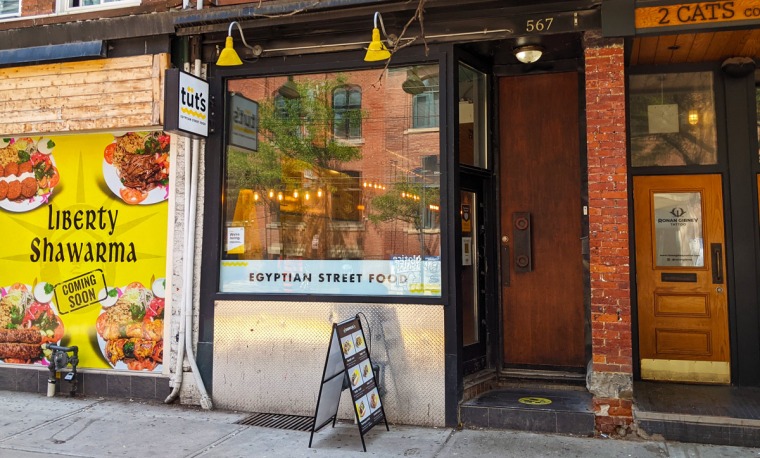 I went with pickles on the side; I think fries are probably the more popular choice, but the occasional pickle slice does a great job of cutting through the richness of the very heavy sandwiches.