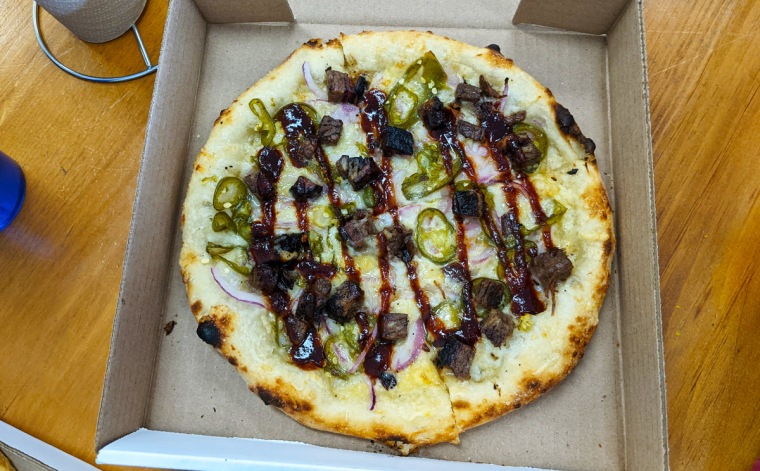 Though Conspiracy Pizza started out as a pop-up inside of the infamous (and defunct) Adamson Barbecue, they’ve since cut ties and have their own space (which they share with Churnt Up, an ice cream shop, and Phamily Eats, which sells patties). 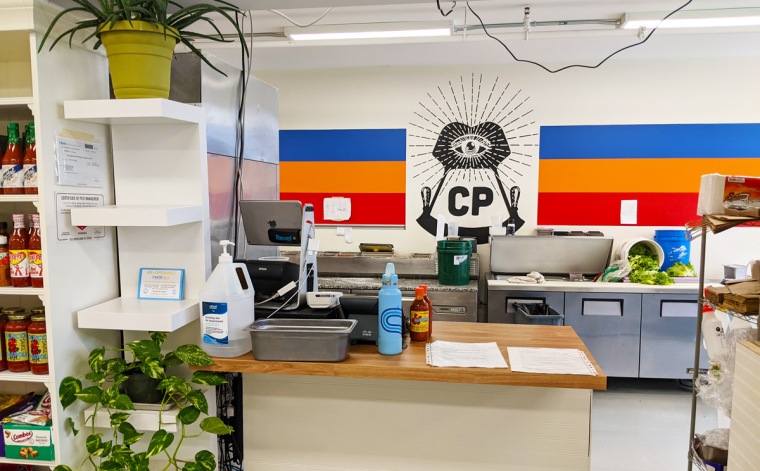 It’s an odd pizza, but it absolutely works.  In particular, the chunks of brisket are shockingly good — they’re nice and tender, and they’ve got a distinctly smoky flavour.  It makes me wish they served a sandwich, because it’s top-notch BBQ brisket. 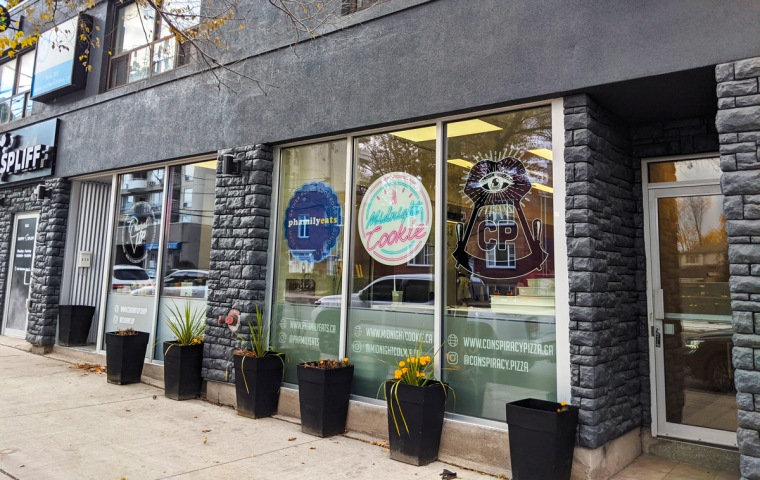 But then the whole pizza is pretty great, with pops of heat from the jalapenos, a satisfying richness from the white sauce and the cheese, and with the barbecue sauce bringing it a nice zippy sweetness to cut through the meat and cheese.  The crust is quite good too, with a super crispy exterior and a fluffy interior. 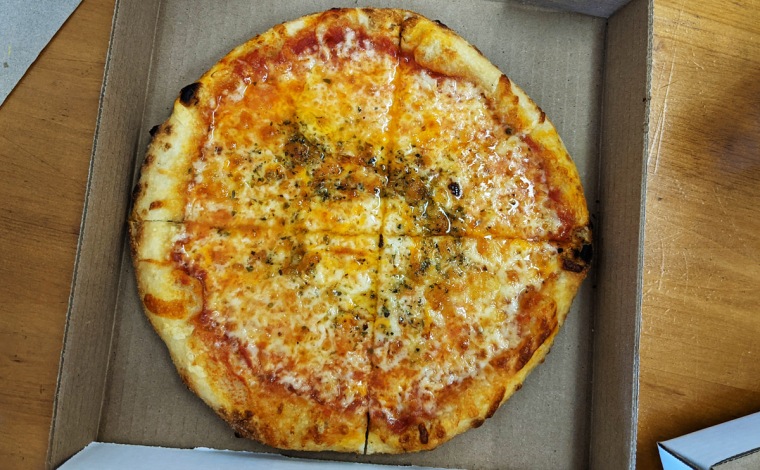 It takes a lot for me to say that a pizza is too cheesy, but… this one was too cheesy.  It’s overwhelming.  It also kinda reminded me of a Costco pizza (the cheddar, maybe?).  It’s not bad — a huge pile of gooey cheese is never going to be all bad — but I can’t say I’d ever order it again. 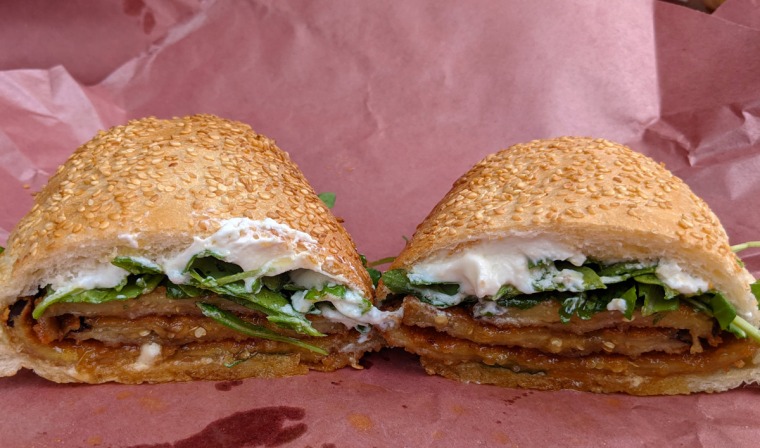 Flora’s Deli is a delightful little shop that offers a takeout menu (they also have a couple of small tables outside) of Italian sandwiches.  It doesn’t have the most exciting menu ever, with the usual veal and eggplant sandwiches, various cold cut assortments, etc.

The sandwiches are so well executed, however, that this never feels like an issue.  The Norma Gina is generally what people talk about when they talk about this place, and yeah, I can see why.  Served on a fresh sesame seed roll and featuring a generous amount of fried eggplant topped with hot honey,  creamy whipped ricotta, and fresh arugula, it’s a great sandwich. 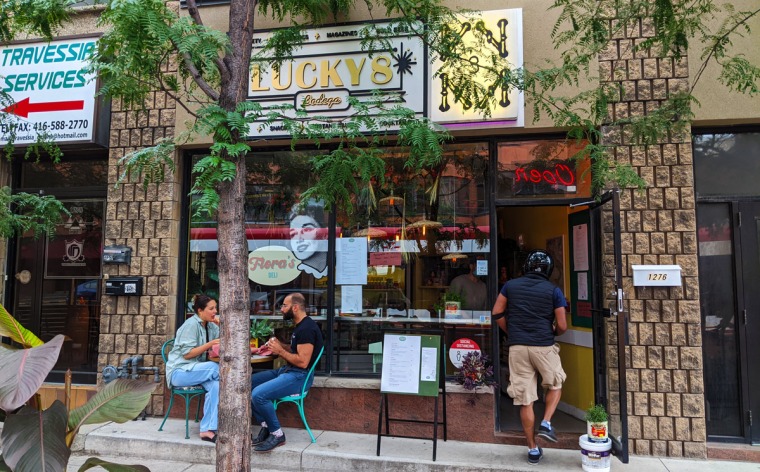 The eggplant is perfectly cooked, the ricotta adds a delightful richness, the arugula is nice and peppery, and the honey adds a subtle sweetness that contrasts nicely with the savoury sandwich.

I also tried the Sofia, which the menu describes as “prosciutto, coppa, sopressata, fresh mozzarella, roasted red peppers, arugula, 6yr balsamico.”  This one’s a pretty standard cold cut sandwich, but when you’ve got top-notch ingredients that all complement each other so well, there’s absolutely no need to reinvent the wheel.  I sort of figured the eggplant sandwich would be the more interesting of the two, but I’d honestly have a hard time picking a favourite; they’re both so good. 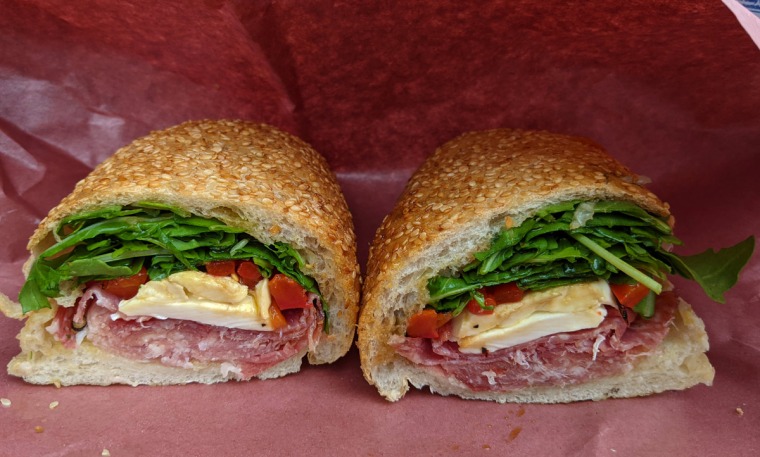 (I should also note that since I wrote this, the restaurant’s pop-up location is no more, but supposedly a permanent spot is in the works.) 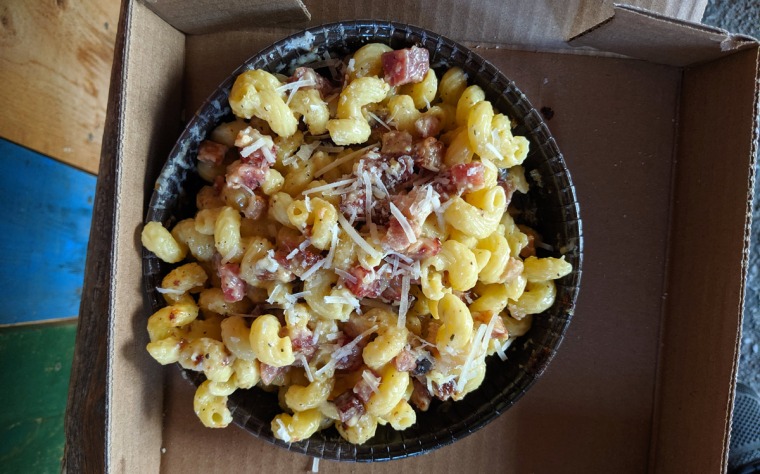 I was pretty much completely blown away by the carbonara at Bobbie Sue’s Mac + Cheese.  It wasn’t what I was expecting at all, but in all the best ways.

I sort of figured it was going to be some kind of bizarre mash-up of mac and cheese and carbonara, but it definitely wasn’t that.  It was actually a legit bowl of carbonara, and it was delightful. 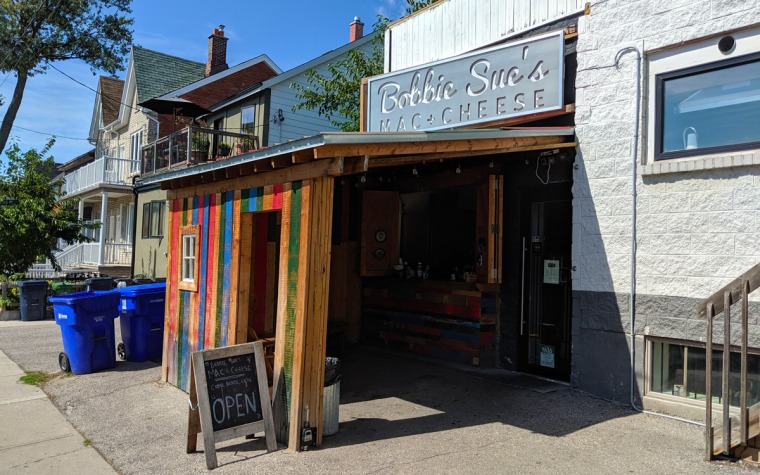 The menu describes the carbonara as “pancetta + Grana Padano + egg yolk.” I really enjoyed it.

The diced pancetta (and yes, it was pancetta, as it should be — not bacon) was abundant and nicely crisped up — it was crispy, salty, and porky.  The sauce was rich and creamy from the egg yolks, with a nice cheesy kick from the Grana Padano (an Italian cheese that’s very similar to Parmesan).  And the pasta was perfectly al dente. 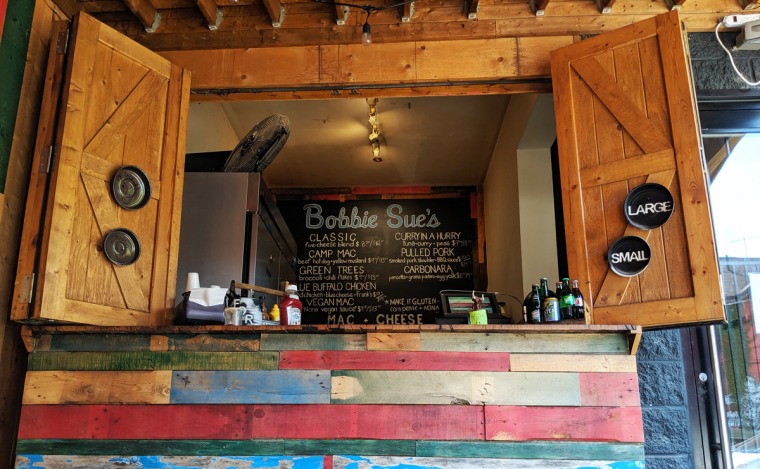 It was maybe slightly too dry, but aside from that it was shockingly good.  You’re barely expecting a bowl of carbonara from an actual Italian restaurant to be that delicious, let alone a mac and cheese take-out window that doesn’t have a seating area.  It’s a really delightful surprise. 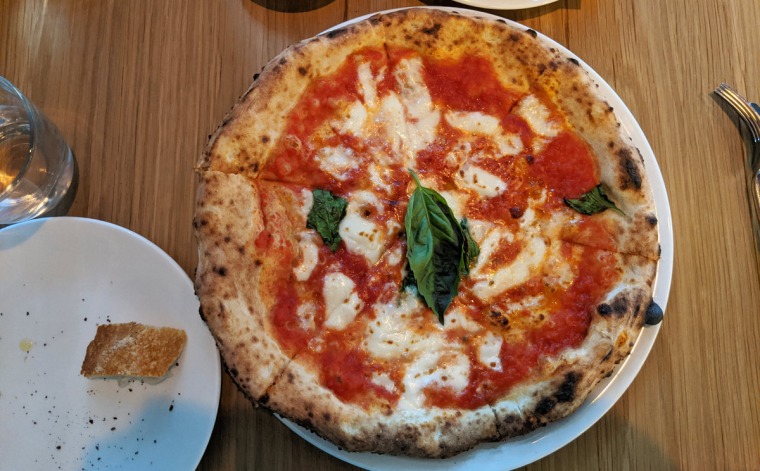 After years and years of speculation and hype, Eataly finally opened in Toronto last month; judging by the intense crowds, it’s a hit.  Apparently there were lines just to get in for the first few weeks, and on a recent visit on Saturday, the place was absolutely packed. 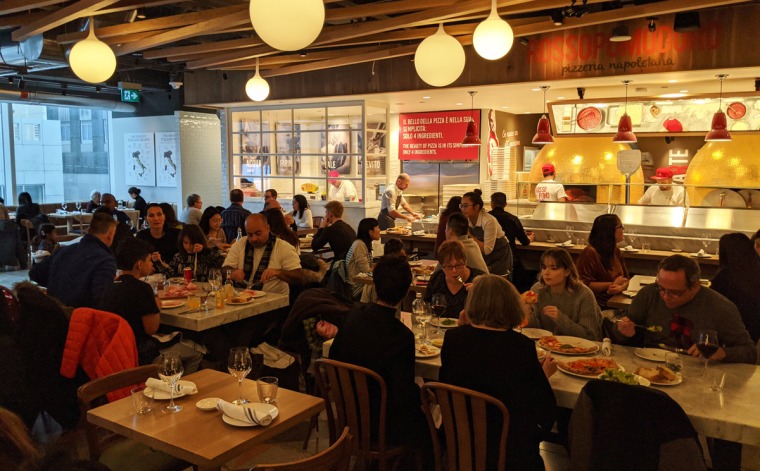 So was it worth the wait?  It’s hard to say based on one relatively brief visit, but I’m gonna say yeah, it was.  It’s basically an enormous, high-end Italian grocery store crossed with a food hall.  They sell all kinds of really interesting looking stuff, and all the food I tried was tasty.  It’s delightful.

I tried a couple of things.  First up was a pizza at La Pizza & La Pasta, a sit-down restaurant with a wood-burning oven that pumps out authentic Neapolitan pizzas. 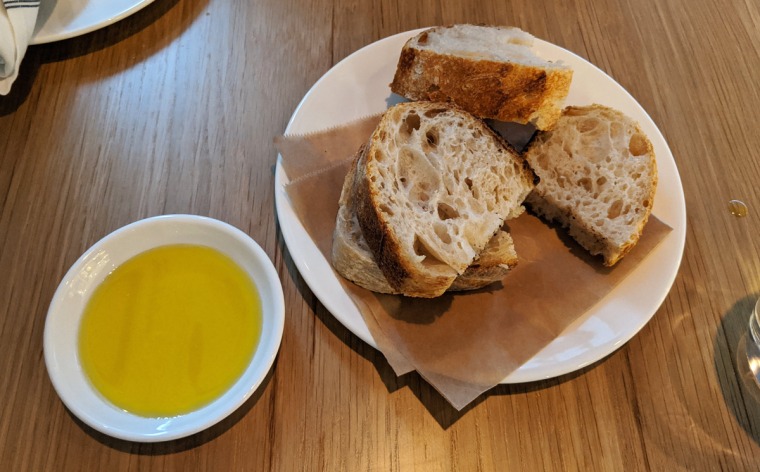 The meal started with some seriously good-quality bread, which came with a bowl of intensely nutty olive oil for dipping.

As for the pizza, I had to try the margherita.  As I’ve said before, I think it’s one of the world’s few perfect foods.  It’s also a great way to judge the quality of a pizza joint; its simplicity puts the technique of the kitchen in full display.  There’s no fancy ingredients to hide behind. 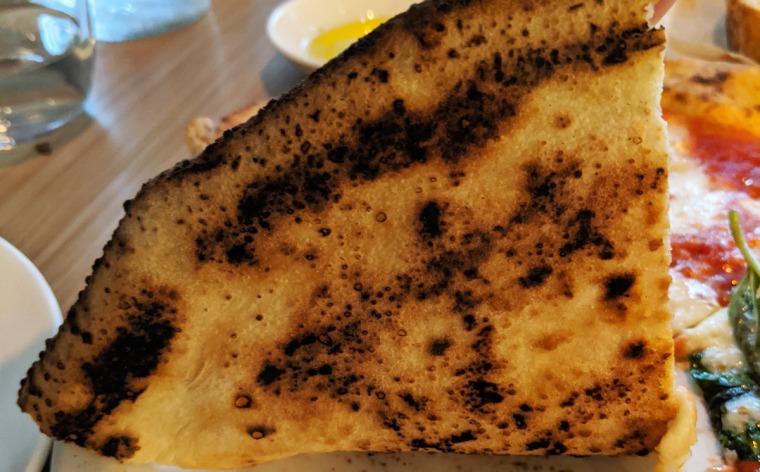 The version they serve here didn’t blow me away — the crust was slightly lacking in substance and flavour — but it was a solid B+.  In particular, the pizza had a perfect amount of char from the blazing hot oven.   The person manning the oven clearly knows what he’s doing. 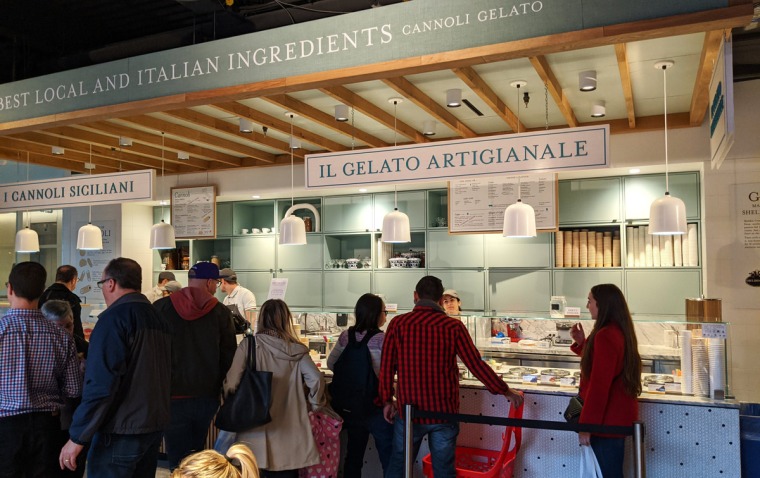 Just around the corner from the restaurant is Il Gelato Artigianale, which has a whole bunch of tasty-looking flavours of gelato on offer.  I went with stracciatella, and I quite enjoyed it. 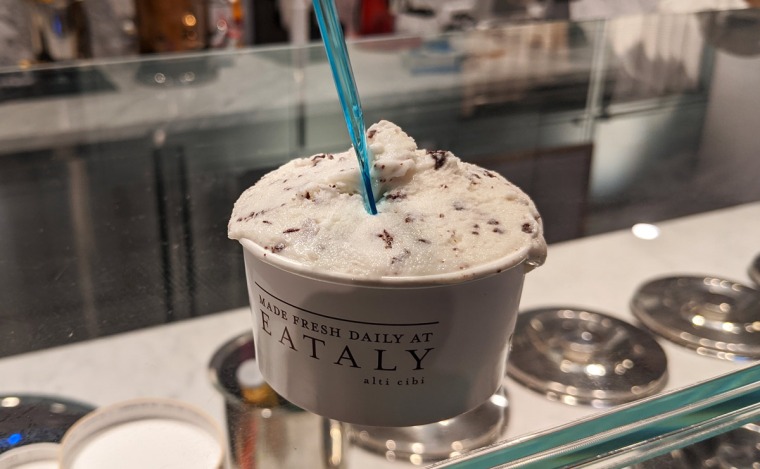 I found it a bit overly sweet at first, but the combo of the sweet ice cream and the very bitter chocolate (they’re definitely using a darker chocolate than the norm) won me over.  And the gelato itself is nice and creamy, even if it was slightly on the thin side. 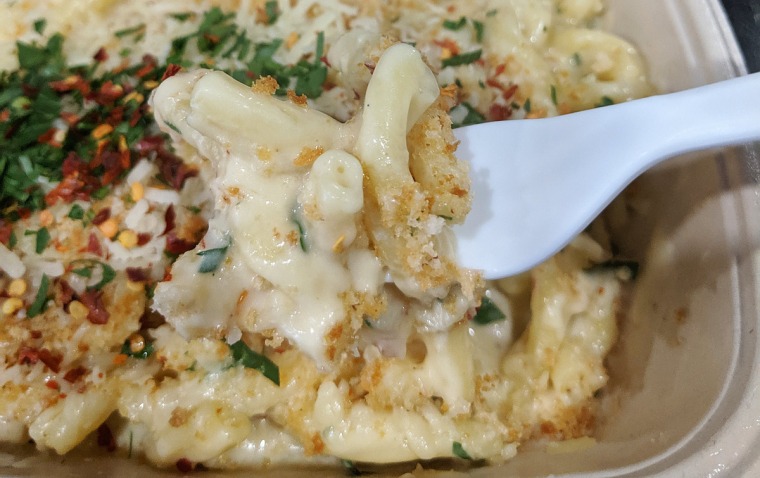 I know that this is an odd complaint that most people probably won’t agree with, but I’ll admit that restaurants that offer a million different combinations kind of bug me.  If you’re going to do this, at least give me a few suggestions so I have an idea of what works well together.  How am I supposed to know which sauces compliment which pasta varieties?  And which toppings work best with those?  I’m not a chef.  Why are you getting me to do your job for you?  Do you want me to come into the kitchen and cook my meal as well? 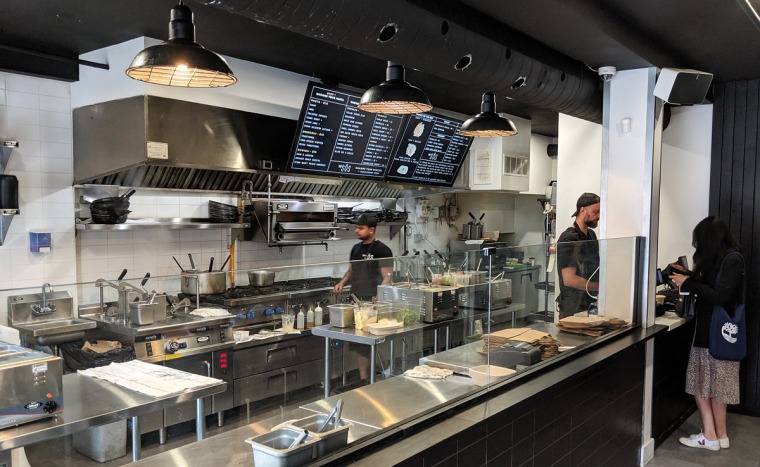 Which is to say that at The SOS they have 11 types of pasta, 10 sauces, 11 toppings, and absolutely no guidance on what goes best with what (at least not without asking the cashier and holding up the line like a jerk, which I didn’t particularly care to do). 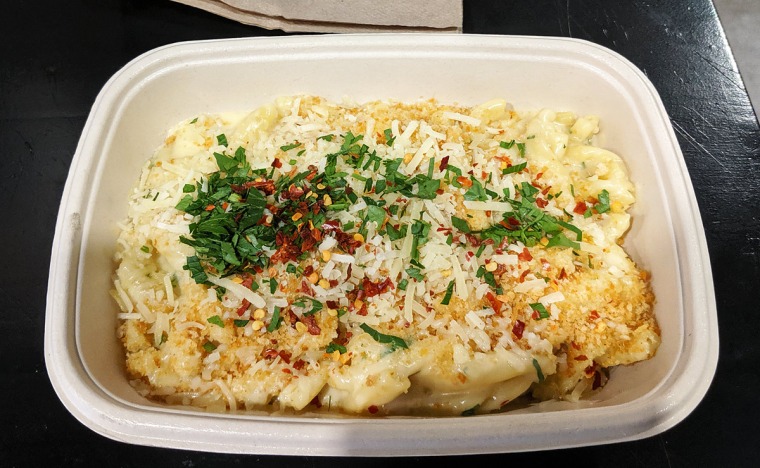 Thankfully they have a daily special; on this particular day it was panko-crusted mac and cheese, which I obviously ordered. 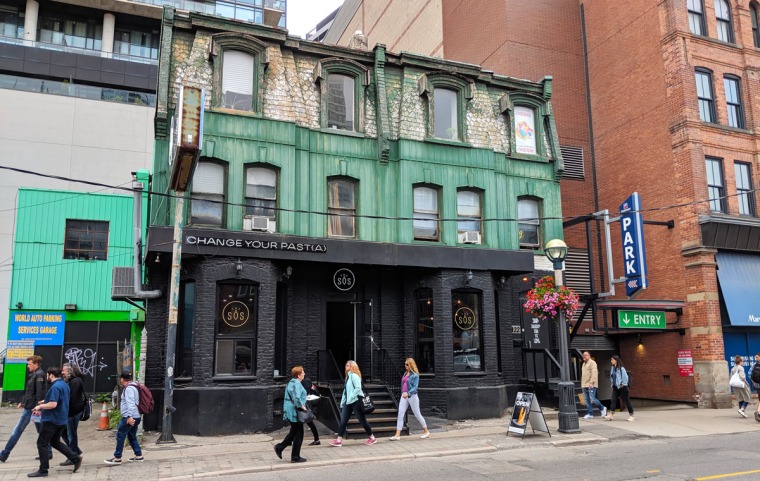 It’s quite tasty.  The pasta is perfectly al dente, and the sauce is incredibly rich and creamy, with a mild cheesy flavour.  The crispy panko offers a nice bit of texture.  It’s slightly underseasoned, and nothing about it rocked my world, but it’s a solid bowl of mac and cheese.