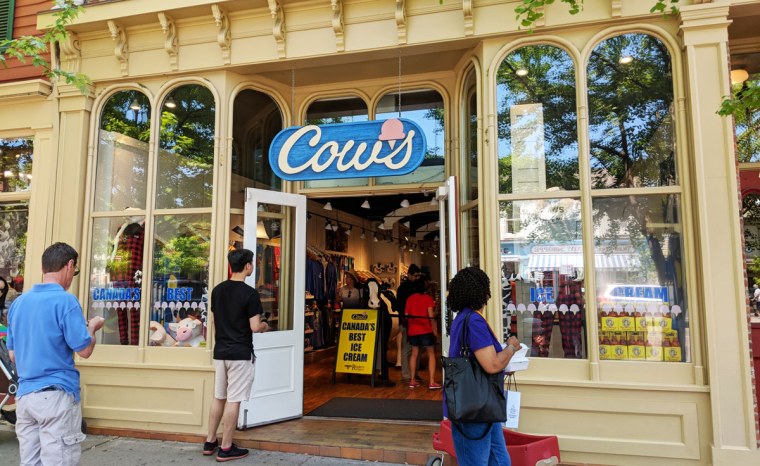 Cows has been a Niagara on the Lake institution since 1983, so they’re obviously doing something right.  Though in this case, I think the thing they did right was picking a location that’s right in the middle of the main road in a very touristy town.  Because the actual ice cream isn’t that great.

It’s relatively rich and creamy, so it’s certainly very, very far from the worst ice cream I’ve ever had.  But the flavour was a pretty big shrug.

The vanilla ice cream doesn’t taste like anything but generic sweetness.  There’s nothing there.  Plain ice cream can be amazing — the sweet cream at Ed’s, which doesn’t even have vanilla bean to fall back on, manages to pack in an impressive amount of flavour and depth.  Meanwhile, this tasted like sweet nothing.

The “English toffee marble” was even worse, and there’s a lot of it rippled in there.  It didn’t have any of the rich caramel flavour you’d expect from English toffee; it was just thick and sweet, like plain corn syrup.

As for the other elements, the chocolate was fine, and the moo crunch didn’t even seem to be there (I’m not sure what it was supposed to be, but I didn’t notice anything but the caramel and the chocolate). 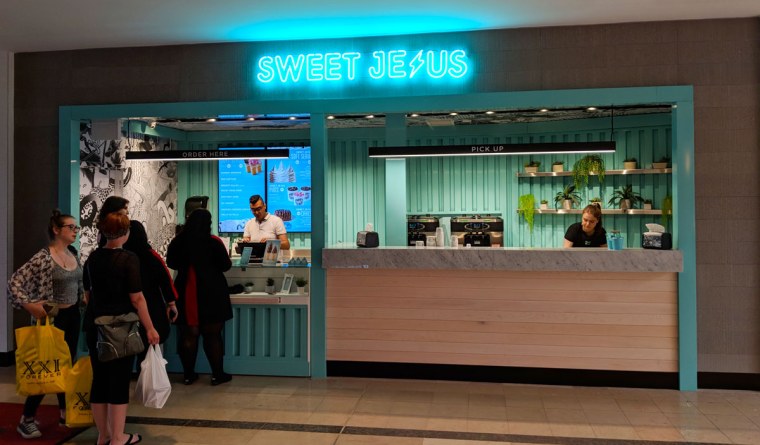 I mentioned recently that I like Sweet Jesus, but that it looks better than it tastes.  Well, I think that the abysmal soft serve at Kiss the Tiramisu and Loukomania Cafe have completely readjusted the way that I evaluate soft serve.  They were a very visceral reminder that bad soft serve can be really bad.

Suddenly, Sweet Jesus is looking pretty good.  Because I just went to their location in Sherway Gardens, and I quite enjoyed it. 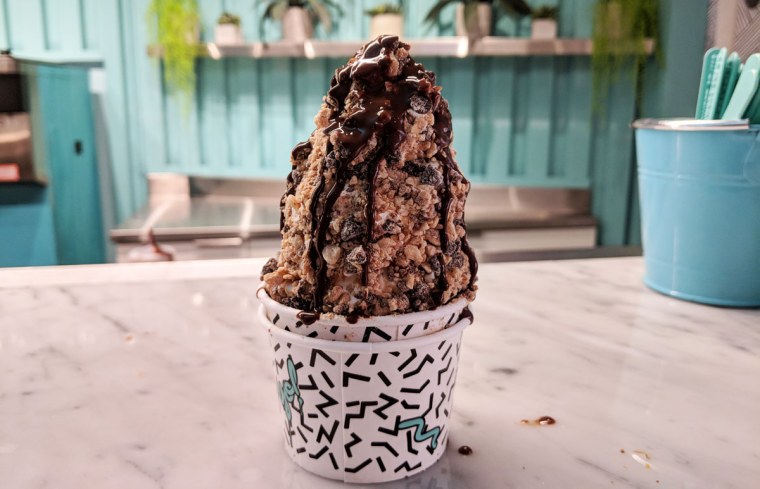 I got the Oh Hungry, which is similar to the flavour I got last time — vanilla ice cream, caramel and peanut butter sauces, peanuts, chocolate chips, and a chocolate drizzle.

It was shockingly delicious.  All of the sauces, nuts, and chocolate went really well together  (true to its name, it tasted similar to an Oh Henry bar), and there seemed to be a better ratio of toppings to ice cream.  Plus, the vanilla ice cream was rich and creamy.  It still didn’t have much of a flavour beyond a general sweetness, but it wasn’t overly cloying and the texture was on point.

I don’t know if the quality has gone up or if my expectations have gone down, but either way, it was good stuff. 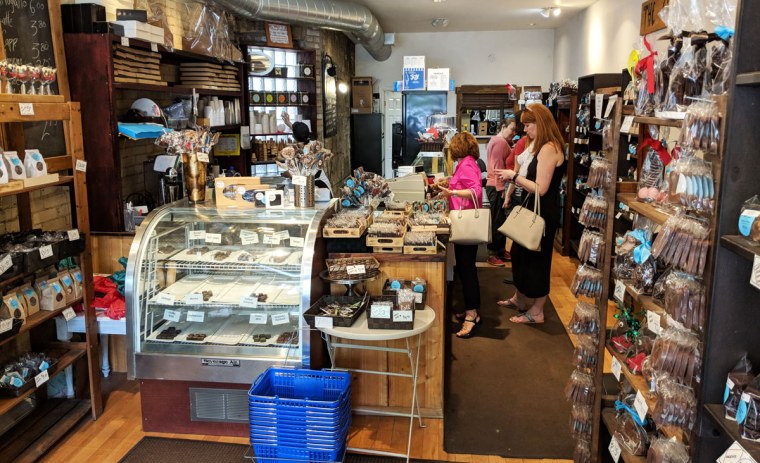 Apparently chocolate shops are pretty great at making ice cream, because Soma has some of the best gelato in the city, and Chocolateria on Roncey serves some top-shelf stuff.  It’s not “best in the city” good, but it’s a respectable scoop of ouce cream.

They have a handful of interesting flavours; I went with the burnt toffee chocolate, which features a tasty mix of chocolate and burnt toffee ice cream.

It’s high-quality ice cream.  The chocolate is satisfyingly rich, and while the burnt toffee could have had a deeper flavour (it basically just tastes like regular caramel), it worked very well with the chocolate.

My only real issue was that the texture was a bit gummier than I’d like, but aside from that it was quite enjoyable. 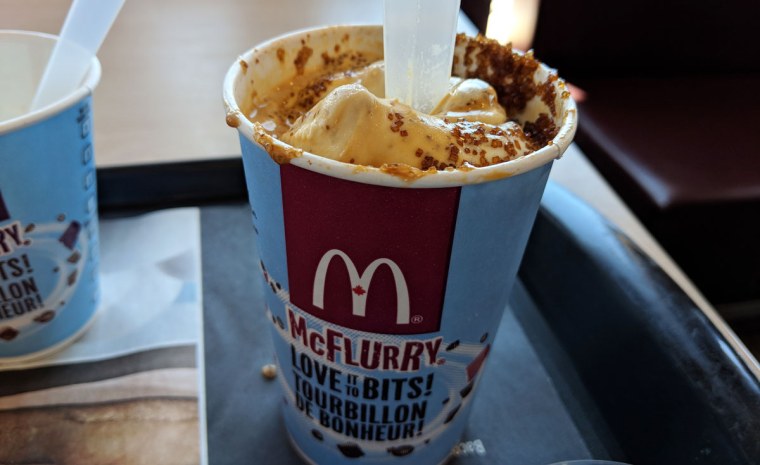 The world tour (via McDonald’s) continues!  And after the sub-par Chinese Szechuan Burger, this one’s actually not bad.

I guess ice cream is harder to mess up than a hamburger (or I have a higher tolerance for mediocre ice cream), because I enjoyed this.

There’s no custard flavour here — the sauce and the caramelized sugar bits are both trying to replicate the crispy shell of a creme brulee rather than the entire dessert.  But it’s tasty enough for what it is; the sugar retains its texture even when mixed into the ice cream, and the sauce has a surprisingly rich, almost burnt caramel flavour.  The whole thing is too sweet and the ice cream isn’t the best, but it’s not bad.

They’re actually quite similar to the standard beef meatballs, which are junk — but tasty junk.  I wouldn’t want to eat them on a regular basis, but they’re not bad for what they are.

The chicken meatballs, on the other hand, are not tasty junk.  The flavour is basically fine; they taste a lot like the beef meatballs, but saltier and with a vague chicken-like flavour.

But the texture is horrific.  Remember those rubber Super Balls that would bounce and bounce and bounce?  I’m pretty sure these meatballs have most of the same properties.  They were so rubbery and horrible that I couldn’t even cut through them with a fork.

On the plus side, I also had a slice of the chocolate caramel cake, and it’s surprisingly great.  It’s certainly not gourmet — it actually reminds me a lot of the brownies they used to serve in my high school’s cafeteria, but with the addition of caramel — but it’s rich and sweet and satisfying.  I think the next time I find myself in Ikea, I might just skip straight to the dessert.