I’ll admit that I was skeptical about Mandi Afandi.  The spot they’re in formerly housed a Popeyes Chicken; since it closed down in 2013, that location has been home to a revolving door of failed restaurants.  The last one — Mandilicious — also specialized in mandi.  I didn’t have high hopes for what I assumed would be the latest in a string of shuttered eateries.

But then Suresh Doss highlighted the place in his column for CBC, and of course, I had to sit up and take notice.  If Doss writes about a restaurant, you can be reasonably assured that the food will be tasty.

They have a handful of things on the menu, but of course, mandi — a traditional Yemini dish which features slow-cooked meat and rice — is right there in the name.  They serve it with either lamb, chicken, or both.

I tried the lamb.  Even with the Doss seal of approval, I was still fairly skeptical about the place, and I could not have been more wrong.  It was shockingly delicious.

The lamb is delightfully tender and absolutely crammed with flavour from the spices they cook it with and the meat itself.  I love lamb, and this is some of the best I’ve had in a long time. 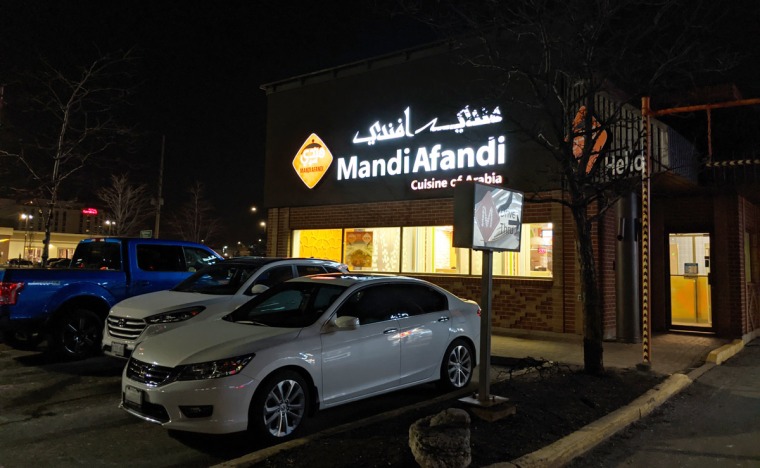 You’d think that the rice would take a backseat to the meat, but surprisingly enough, it’s just as good.  You can tell its been cooked with the meat because its infused with that flavour, and it’s fragrant with the same delightful spices that make the lamb so tasty.

The crispy fried onions only amp up the flavour, and add a nice textural counterpoint to the tender lamb and fluffy rice.  You also get little containers of yogurt sauce and hot sauce on the side, and while neither are particularly necessary (it’s already so damn good on its own), they both compliment the dish quite well.

If you’re looking for tasty roast pork, go to Wilson’s Haus of Lechon.  Trust me on this one; just do it. 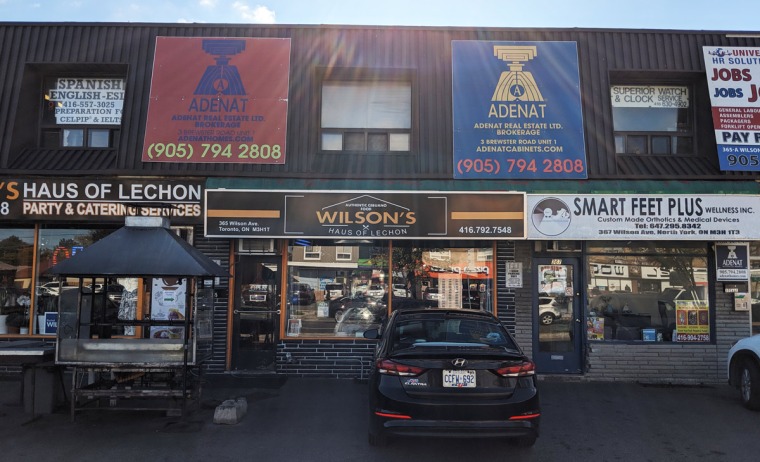 As you might imagine, this place specializes in lechon, the Philippines’s version of roast suckling pig.  I knew I was probably in good hands as soon as I walked in the door and saw the whole, glorious pig sitting behind the counter. 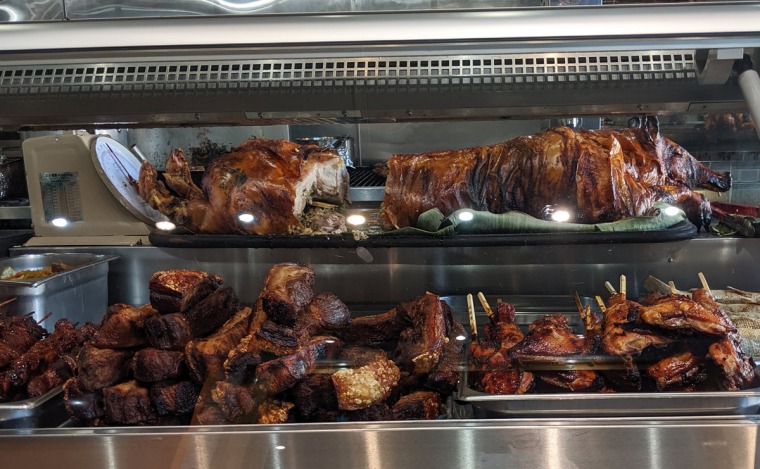 I wound up trying the roast pig and the roast chicken, and both were pretty much incredible.

The pork is absolutely fantastic; it’s tender, juicy, and absolutely exploding with flavour.  The meat itself was thoroughly infused with a delightfully garlicky, herby punch of flavour.  But the pork itself still shines through.  It’s so good.

I wish the skin had been a bit crispier, but it was otherwise so delicious that it didn’t really matter.

The chicken was also pretty amazing, though it’s hard for anything to compare to that pork.  I wanted dark meat and wound up with a breast, but it was surprisingly tender for white meat, and of course it had that same garlicky/herby flavour.

The combo comes with sticky rice and lumpia Shanghai, which is a very tasty pork-stuffed Filipino spring roll.  It’s all so good. 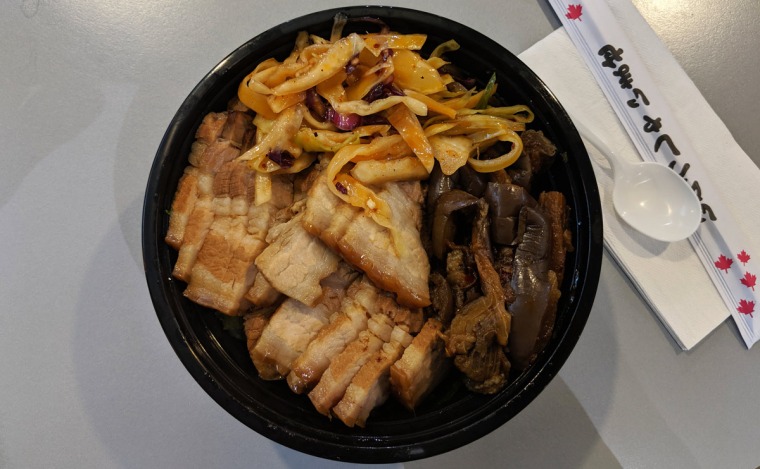 I’ve mentioned before that the Emerald Park food court near Yonge and Sheppard is a treasure trove of unique Asian eateries (though not everything there is particularly great).

My latest discovery: Chengdu Guokui, which specializes in Sichuan cuisine.

I ordered the braised pork rice bowl, which comes with the aforementioned pork, stewed eggplant (I think?), and a spicy slaw on top of rice.

It’s almost 17 bucks with tax, which seems excessive until you get your bowl and realize that it weighs about a pound, and is crammed with enough pork belly to feed a small family.

It’s certainly better than the last thing I tried in this food court, but alas, it’s not great.  The main issue here is the pork; it’s quite underseasoned, and is lacking the punch of flavour you’re expecting from the dish.  It also had a vague leftover flavour, and wasn’t quite as melt-in-your-mouth tender as it should have been.  It was tasty enough, but it was nothing special. 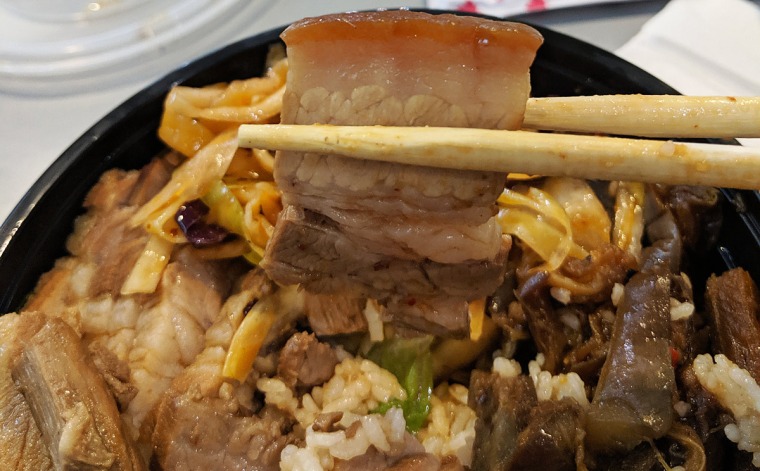 The eggplant was nice and tender, and the rice, though mushy, featured a tasty sauce and was fairly satisfying.

The star of the show, oddly enough, was the slaw; it was tossed in an intensely flavourful chili oil, and had that great numbing heat you get from Sichuan cuisine.  I wish there had been about double the amount.

Yang’s Braised Chicken Rice is a Chinese chain that recently opened seven simultaneous locations in the GTA.  Opening one restaurant is tricky enough; I can’t even imagine what must go into opening so many at the same time.

Whatever kinks they had (and there must have been kinks) since opening in September have clearly been worked out; the food and service were both top-notch.  Apparently they have over six thousand locations worldwide, so I guess opening seven more is no big deal. 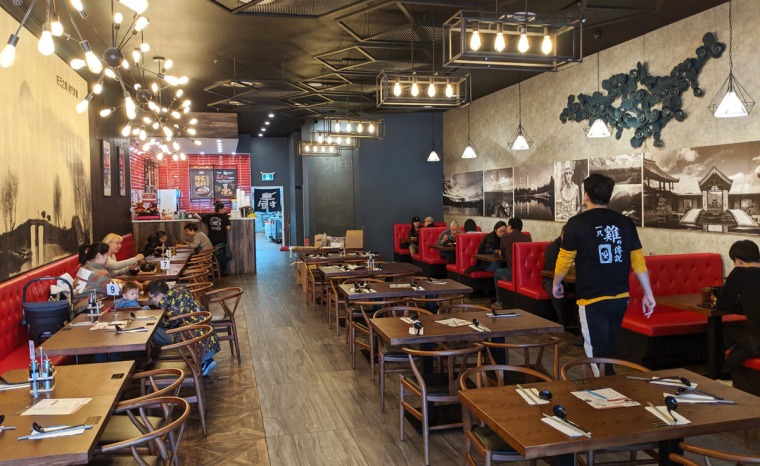 You can either get it standard or boneless (I went with the former), and you can pick your spice level (I picked “authentic,” which was actually quite mild; I’ll probably go spicier next time).

It seemed a bit simple at first, but it really grew on me; by the time I was done, I was 100 percent into it.

The chicken is quite tender, and has a nice soy-sauce-infused flavour from the braising liquid.  Combined with the rice and the richly flavourful sauce, it’s surprisingly addictive.

Oddly enough, however, the chicken wasn’t the highlight — it was the slices of mushroom in the sauce.  These things do an amazing job of soaking up all the flavour from the dish; they’re basically chewy little flavour bombs.  They’re delightful. 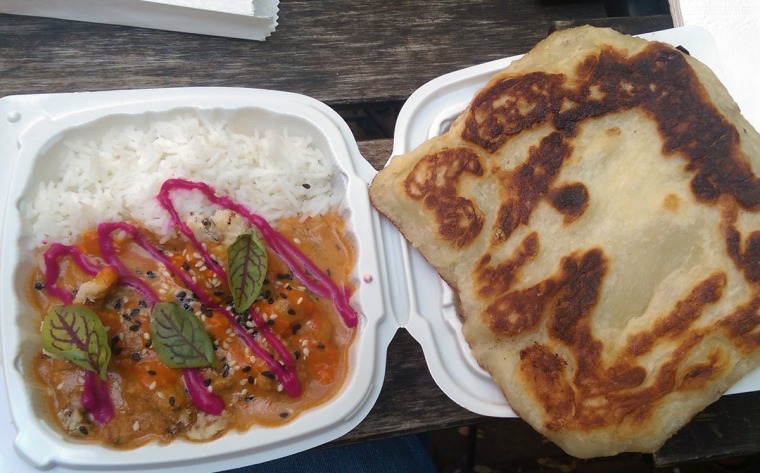 Is it still butter chicken if it doesn’t have butter or chicken?  That’s the question at TVX, a vegan joint in Kensington Market that serves what it calls “plant-based South Asian cuisine.”

Mostly, they serve a variety of vegan curries that come with rice and paratha roti.  One of those curries is the aforementioned butter-and-chickenless butter chicken, which subs in fried cauliflower for chicken.

So is it still butter chicken?  Not really.  But is it tasty?  Definitely.

It doesn’t taste quite like any butter chicken I’ve had before — the sauce is tangier and less creamy — but for what it is, it’s quite good.  It’s garlicky, very spicy (you can choose your heat level — I went with the spiciest, and it wasn’t kidding around) and surprisingly satisfying.

The fried cauliflower works really well — it’s battered and fried, with a nice crunchy exterior and a meaty interior.  It doesn’t even vaguely resemble the chicken in a traditional butter chicken, but the hearty crunch stands up nicely to the sauce, and it’s delicious regardless.

The paratha roti was also untraditional but tasty.  It’s thicker and more substantial than any paratha roti I’ve had before, but it still had that satisfying combo of crispy, greasy exterior and chewy interior that you’re looking for.