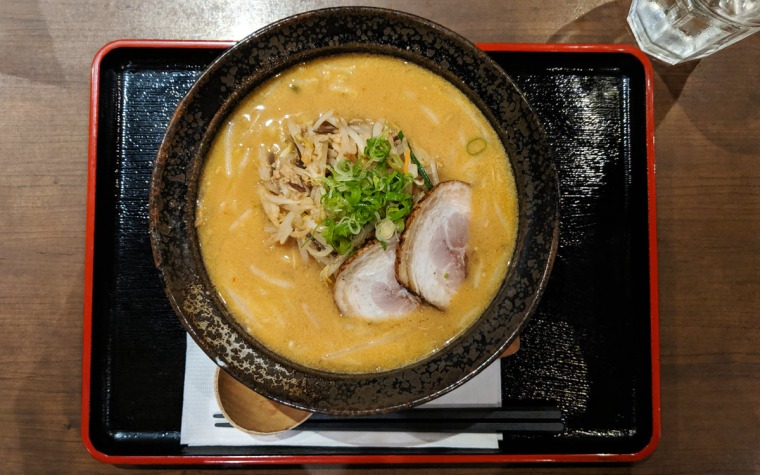 Ramen Isshin is a beloved ramen joint on College near Bathurst — so beloved, in fact, that my phone popped up with a notification out of the blue to recommend it to me, and told me there’s a 97 percent chance that I’ll like it.  97 percent!  It’s hard to argue with that level of certainty. 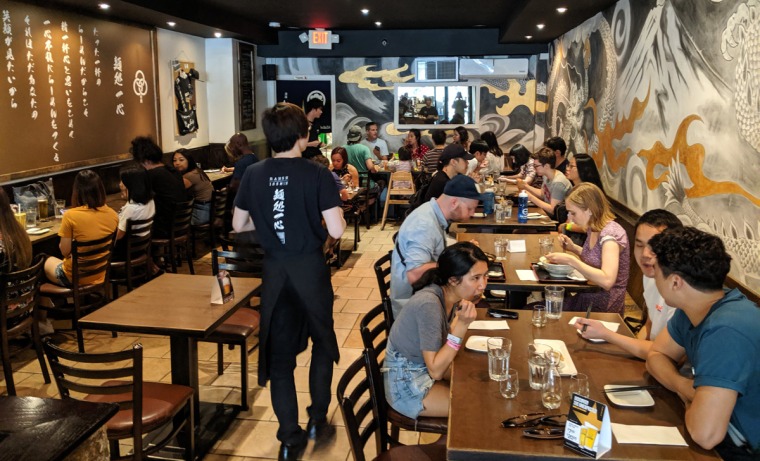 And yeah, I liked it.  My phone was correct.

It’s quite tasty.  The tonkotsu broth has a vibrant flavour that’s a bit one-note in its salty/savoury intensity, but still quite satisfying.  It’s not the best bowl of ramen I’ve ever had, but even average ramen is better than most other dishes. 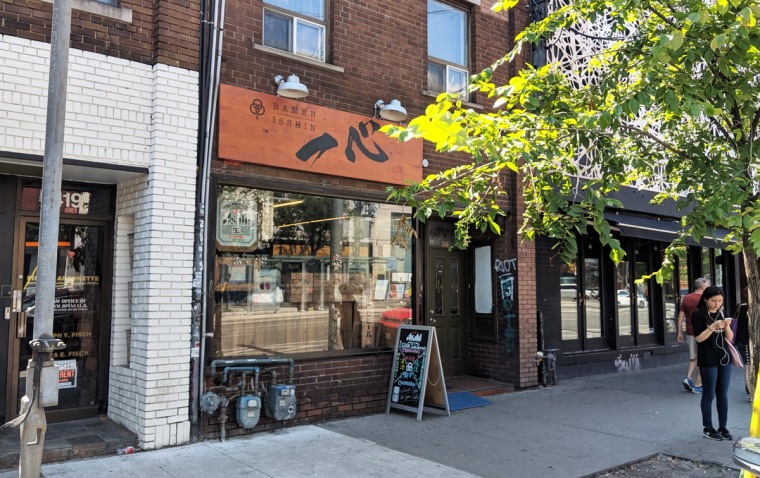 Aside from the broth, all of the add-ins are quite tasty: in particular, the bean sprouts add a nice fresh crunch that helps to balance the bowl’s richness, and the ground pork amps up its meaty flavour.

As for the noodles, they’re thick, chewy, and satisfying.  It’s a tasty bowl of soup.

Like Hanabusa Cafe in Kensington Market, Fuwa Fuwa specializes in Japanese souffle pancakes, which are basically like a cross between a pancake and a custardy souffle.

I’ve already talked about Hanabusa Cafe; you can probably just read that post to get a sense of what Fuwa Fuwa is like.  They’re very, very similar.

I ordered the cookies and cream, which comes with two pancakes topped with Oreo-cookie-infused cream, a whole Oreo cookie, and a scoop of ice cream on the side.

It’s quite good — the pancakes are light, fluffy, custardy, mildly sweet, and very creamy.  The only noticeable difference between this place and Hanabusa Cafe are that the pancakes here are slightly creamier.  I couldn’t tell if they were slightly underbaked, or if that was intentional.  Either way, they were very tasty.

The cookie-laden cream compliments them well, though the ice cream was overly sweet, with an odd flavour I couldn’t quite put my finger on. 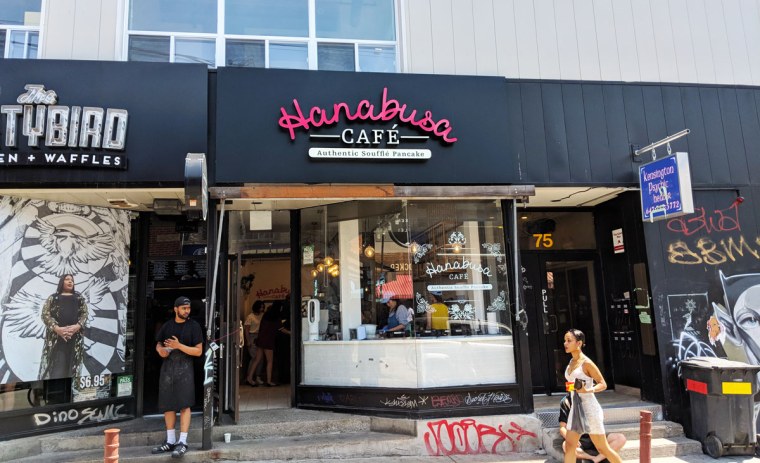 It seems like every few months, some new food trend sweeps its way through the city.  In the last couple of years we’ve had stuff like poke, chicken and waffles, Japanese cheesecakes, and sushi burritos.  The latest seems to be souffle pancakes, a Japanese dessert that’s exactly what it sounds like (a cross between pancakes and souffle).

If what they’re serving at Hanabusa Cafe is any indication, this is a trend that I can get behind.

My only other experience with this dish was at a place called am.pm in Hong Kong, and that version was dense, overly eggy, and just all-around unappealing.

The one at Hanabusa Cafe, on the other hand, was the polar opposite — it was almost absurdly fluffy, with a mild sweetness and a satisfying custardy flavour without any of the in-your-face egginess you might be expecting.  I ordered the Original Pancake, which is the simplest choice: it’s three pancakes topped with a dollop of whipped cream and served with a side of strawberries and blackberries.  It’s outstanding. 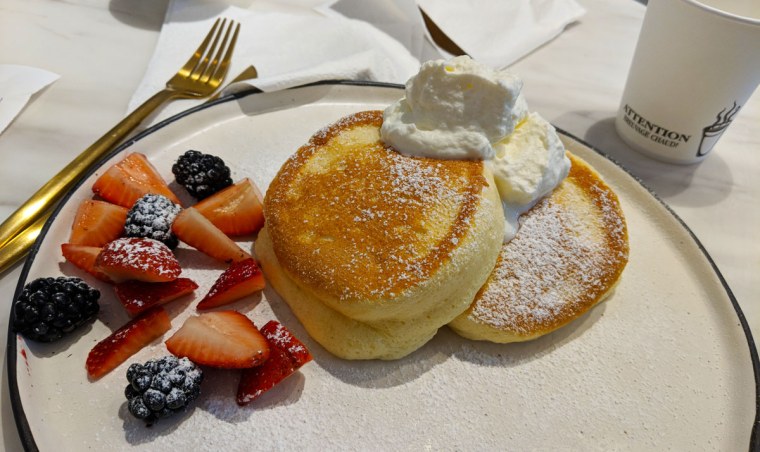 Unlike a traditional pancake, it’s already fairly sweet, so it’s perfectly delicious on its own.  I could eat about a million of these (though they’re surprisingly heavy, so three feels like a good number).  The ethereal lightness combined with the custardy flavour is seriously addictive.

I’ll admit that my expectations weren’t all that high, but I really, really enjoyed this.

I just got a bowl of curry udon noodles from Manpuku, and they were both super cheap and super delicious.  What’s better than that?  (I’ll answer for you: nothing.  Nothing is better than that.)

For six bucks, you get a very generous amount of udon noodles in a rich, curry-flavoured broth with some tender potatoes and a heaping pile of sliced pork.  It’s an almost suspiciously good deal; for that little, it really shouldn’t be all that good, right?  But it’s so good.

The broth is rich and delicious, the sliced pork is super tender and infused with that great curry flavour, and the noodles are chewy and perfectly cooked.  The noodles are maybe a little bit bland, but other than that I honestly don’t have any complaints about this bowl.

It’s not the type of thing that’s going to blow anybody’s mind, but it’s rich, hearty, and delicious.  I’d be hard-pressed to think of a more satisfying meal for under six bucks in the GTA.

Tonkatsu is one of those dishes that’s very difficult to dislike.  You can coat pretty much anything in panko breading and then deep fry it, and that thing is going to be tasty.  A fried, panko-breaded pork cutlet?  Served with rice and a delicious dipping sauce?  Yeah, it’s hard to go wrong there.

And while Mr. Tonkatsu doesn’t serve the best tonkatsu I’ve ever had, they certainly do a solid job with it.

They have a couple of different pork options on the menu — loin and tenderloin, with the latter being an extra dollar.  I went with loin, which comes with a bowl of rice, tonkatsu sauce, shredded cabbage, and miso soup.

The panko breading on the tonkatsu had an absolutely perfect texture — it was golden and lightly crispy, with just enough heft to make its presence known, but not enough to overwhelm the meat.  But it was way underseasoned; it was actually pretty bland.

Thankfully, the tonkatsu sauce very thoroughly solves that problem.  I normally like that stuff — it’s kind of like a Japanese take on HP sauce — but the version here was something special, with way more complexity than the norm.

It’s good that the sauce was so delicious, because the meat needed a lot of it.  Aside from the distinct lack of flavour, the pork itself was overcooked and extremely dry.  A prodigious application of the tasty sauce goes a long way towards fixing those problems, but they are problems nonetheless.

Everything else was quite good.  The dressing for the cabbage was the usual sesame-infused concoction you’d expect; it was quite satisfying.  And the miso soup had a mildly fishy funk that I found to be delightful.