I had a bit of an iffy meal on my last visit to La Cubana, but if the sandwich I just had was any indication, that was just a blip on the radar.  La Cubana is still very, very good.

Specifically, I had the Guava BBQ Shortrib Medianoche, which Toronto Life recently called the 11th best sandwich in the city.  I don’t always agree with Toronto Life’s opinions on food, but in this case they’re dead on.  It’s outstanding.

The shortrib itself is absurdly good.  It manages to be melt-in-your-mouth tender while still retaining its texture.  It has a nice beefy flavour that’s complemented perfectly by the guava BBQ sauce — the sandwich is saucy as hell (there was a huge pool on the plate when I was done eating), but the sauce is so good that it feels just right.  It’s sweet, but it has a tangy, zippy bite that balances it out.

Everything else complements it perfectly.  The crispy onions are really tasty, and you get a good amount of  crunch and acidity from the slaw and the jalapenos.  It’s a great mix of flavours and textures.

And the bun is soft and fluffy, with just enough substance to hold up to the saucy, generously stuffed sandwich.  It’s so good.

I’ve mentioned before that the ice cream at Ed’s Real Scoop can be a bit hit and miss.  One of their more consistent flavours, however, is the burnt marshmallow.  It’s pretty much always delicious.

I mean, how could it not be delicious?  It’s basically sweet cream, which is clearly the best flavour at Ed’s, with a rich, deeply flavourful caramel sauce swirled in.  It only just barely tastes like burnt marshmallow (it tastes more like creme caramel to me), but more importantly, it tastes delicious.

And the ice cream itself is nice and creamy, though like all of the ice cream at Ed’s in the last few years, it has a slightly gummy texture that I find marginally off-putting.  It’s not a huge deal, but it’s there and it’s unfortunate (I will concede that in this particular case, the gumminess could be attributed to the fact that this is a marshmallow flavour.  But it’s there in all of their flavours, sadly).

Cinco is an unassuming Mexican restaurant on Roncesvalles that’s been serving up tacos and rotisserie chicken for about a year.  Nothing about it particularly stands out, but if you’re in the area, I’m sure you could do worse.

It wasn’t bad, though I wish they had taken the same amount of meat and split it into two tacos, because it’s kind of absurd.

The bites where you get a bit of everything — the shredded pork, the cilantro, the pickled onions — are really good.  But there’s such a heaping mound of meat that many (most?) of the mouthfuls are pork, pork, and nothing but pork. 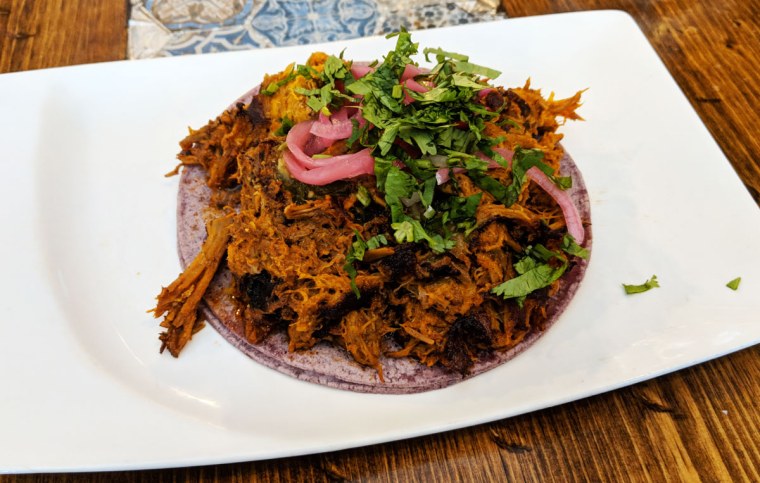 This wouldn’t have necessarily been a bad thing, but the pork was quite dry despite being shockingly greasy (seriously, the amount of oil dripping out of the taco was insane.  The entire plate was swimming in it by the time I finished).

Still, it was tasty enough — the adobo-braised pork was tasty, the two blue corn tortillas were nice and fresh (the thin layer of cheese between them was a nice touch, but it was a bit too subtle to add much to the overstuffed taco), and the mouthfuls with a bit of everything had a nice balance of richness from the meat and acidity from the pickles.

I also tried the the chicken quesadilla, a daily special.  This was a bit of a head-scratcher; it was filled with pieces of plain chicken, and… that’s about it.  No cheese, no other ingredients (that I could taste, at least), just a whole bunch of stale-tasting chicken chunks.  But it was fine, I guess — especially once I started dipping it into the pool of porky grease from the taco.

I’ve mentioned before that I quite like Ed’s Real Scoop, but that really, their sweet cream is where it’s at.  It’s outstanding.  Their other flavours are disappointingly hit-and-miss.

But in all my dozens of visits to the place over the years, I’ve never bothered to try their gelato.  This is going to be a short post — more of a PSA than anything else — because it’s not very good.  I’d advise that you stick to the ice cream.  Specifically, stick to the sweet cream.

I tried the pistachio and the bacio (chocolate hazelnut), and both of the flavours were pretty weak.  There just wasn’t much there, other than a generic sweetness.  This tends to be an issue with their ice cream, too, but at least in that case they’re starting with a great quality base.

Alas, the gelato itself was thin and underwhelming, with barely any creaminess at all.  It’s a waste of time when the ice cream is right there. 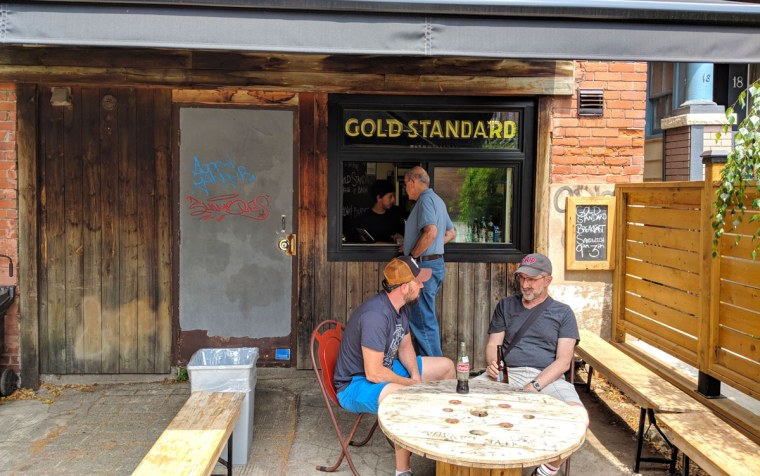 I recently tried the burger at Gold Standard, and while I enjoyed it (and appreciated that a Toronto burger joint was finally serving an American-style slider), I wasn’t blown away.

Well clearly, the breakfast sandwich is the thing to order, because that one?  That blew me away.

I really should have cut it in half so that you could see its glorious innards; it doesn’t look like much in that picture, so you’ll just have to take my word that everything was well-proportioned and perfect.

All the components work so well together.  The perfectly cooked egg and the gooey cheese meld into something that’s downright magical.  The generously-applied crispy bacon adds texture and a meaty saltiness.  The mild kick from the hot sauce along with the vinegary bite of the pickles cuts the richness of the cheese, the bacon and the eggs.  And the soft, fresh, perfectly toasted English muffin holds it all together (and adds a light crispiness) without getting in the way.

Best breakfast sandwich ever?  Quite possibly!