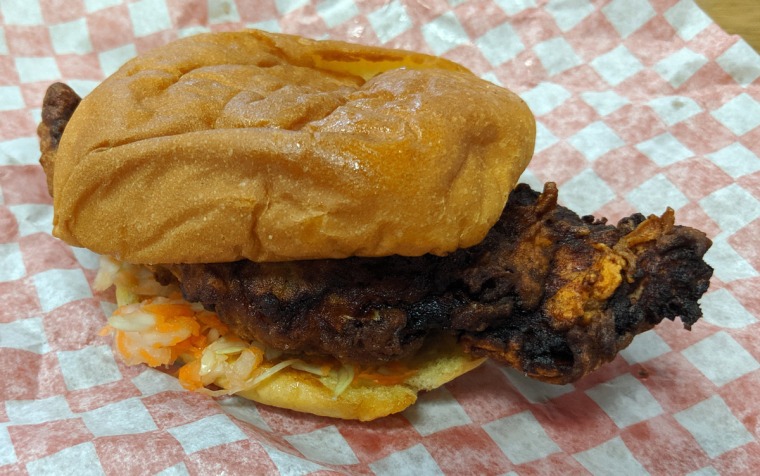 I love Rudy.  I’m on record calling their burger the best in the city.  So it pains me to say this, but the meal I just had there was not great.

To be fair, I didn’t have a burger; going to a burger joint and not ordering the burger is probably not the smartest thing in the world.

Instead, I got the fried chicken sandwich and the poutine.  Neither was particularly great. 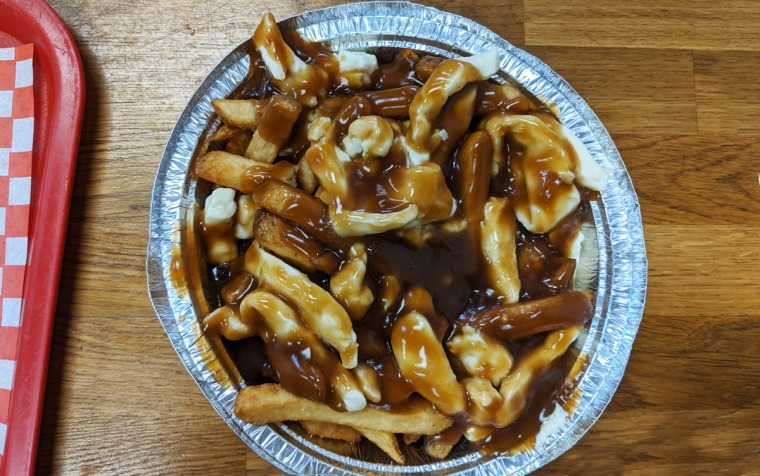 The chicken sandwich is dubbed the Valentino: “Fried Chicken Sandwich, Coleslaw, Valentino Sauce, Mild Hot Sauce.”  I’ve had this before and found it to be quite tasty, so maybe they were just having an off day?

The biggest issue is the chicken itself; it was dry, overcooked, and incredibly salty.

The first few bites were outright bad, but then I noticed that the two sauces were actually in little plastic containers on the side rather than on the sandwich.  I’m not sure why they did it that way (I certainly didn’t ask for that), but once I applied them both to the chicken, things improved considerably.  The tasty ranch / hot sauce combo helped to smooth over a lot of the chicken’s faults. 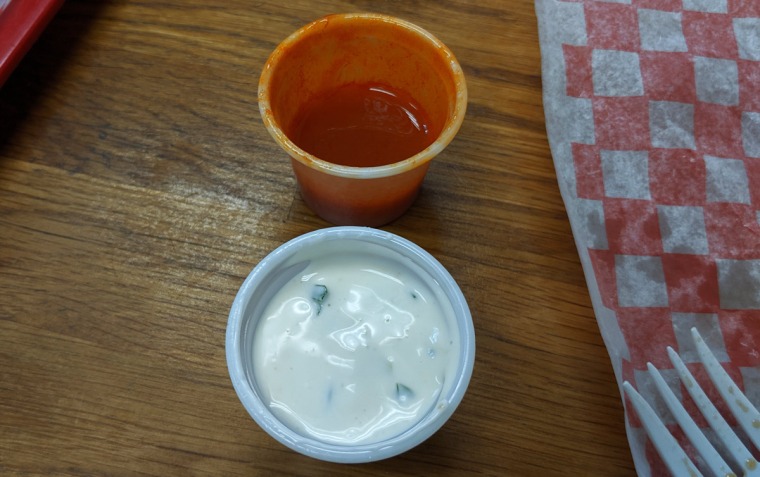 As for the soft squishy bun that works so well on the burger — sadly, it has a hard time holding up to the more substantial chicken sandwich.

I also tried the poutine, which Toronto Life recently called the best in the city.  It was fine?  I guess?  The gravy was overabundant and bland, the curds were stale (no squeak to be found), and the whole thing wasn’t hot enough to even vaguely melt the cheese.  It certainly wasn’t unpleasant to eat, but it’s a far cry from the best in the city.

I should note that someone else got the burger and said it was as delicious as ever, so unsurprisingly, the burger is the thing to order at the burger joint.  Who would have guessed! 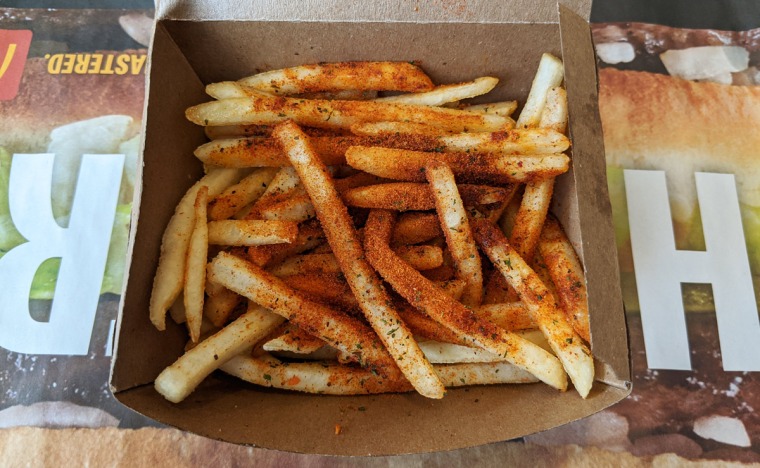 The Spicy Chipotle Seasoned Fries aren’t the most exciting new item at McDonald’s — they’re just fries with some seasoning on them.

And when I popped open the box, I was skeptical.  The way the spice blend was mounded onto the fries, there was no way they could be good.  That’s too much seasoning, isn’t it? 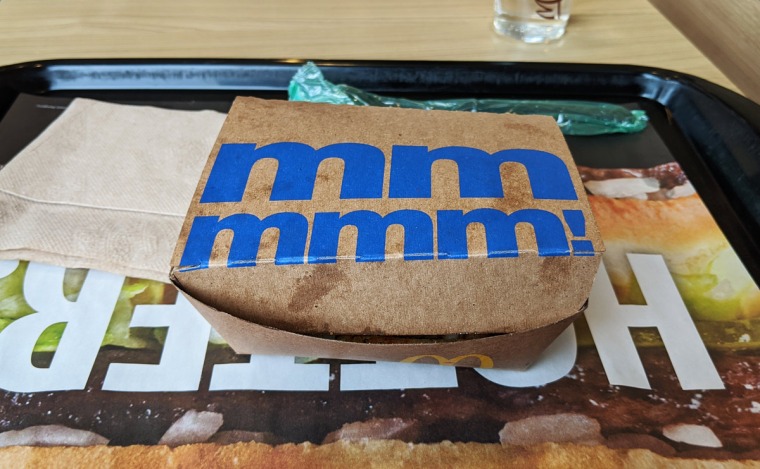 They were actually pretty tasty.  The profound amount of seasoning on the fries (particularly the ones on top) made me assume that the flavour was going to be overwhelming, but it was more subtle than I was expecting.  There was a lot, but it worked.

The seasoning is lightly zingy, with a decent chipotle flavour and a mild hit of spice.  It’s not too salty, which is good because if it were, it would have been inedible. 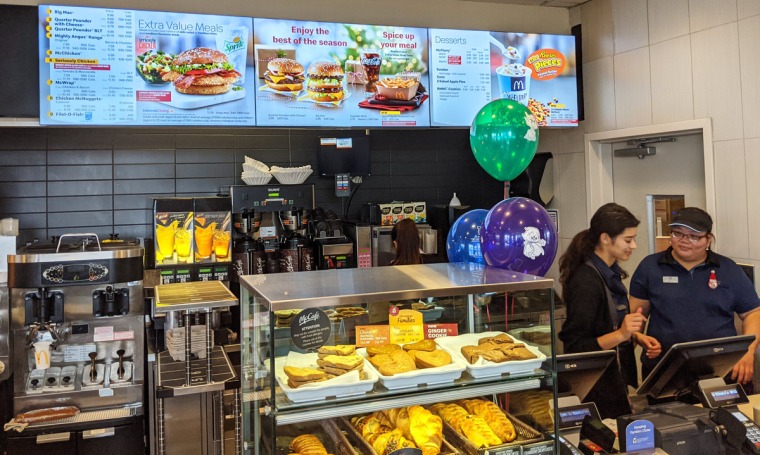 The effect is basically like a cross between a flavoured bag of chips and French fries.  It’s quite tasty.  The only real downside is the presence of garlic and onion powder in the spice mix, which means you’re going to be stuck with a lingering aftertaste for hours after you eat it.

Taking the fish from a plate of fish and chips and serving it in a sandwich is such an obvious idea that I’m shocked it isn’t more common.  And if Sea Witch is anything to go by, it totally works. 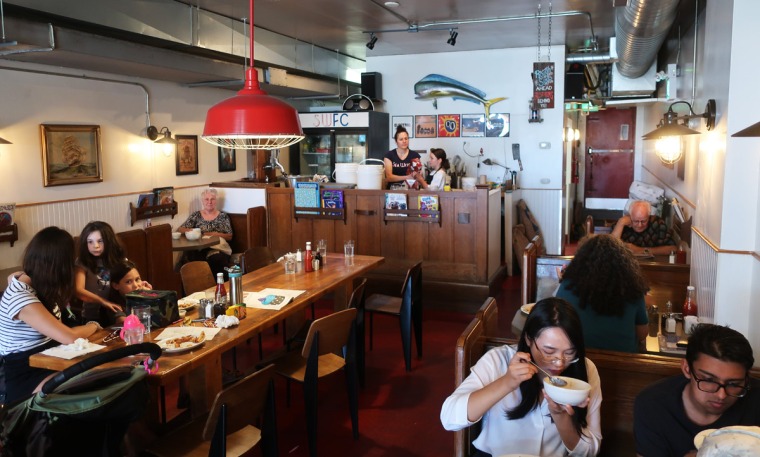 You can get the pickerel sandwich either with or without chips; it’s $15 with, and $13 without, so obviously you need to get the chips (it is, however, a massive amount of food, so bring your appetite). 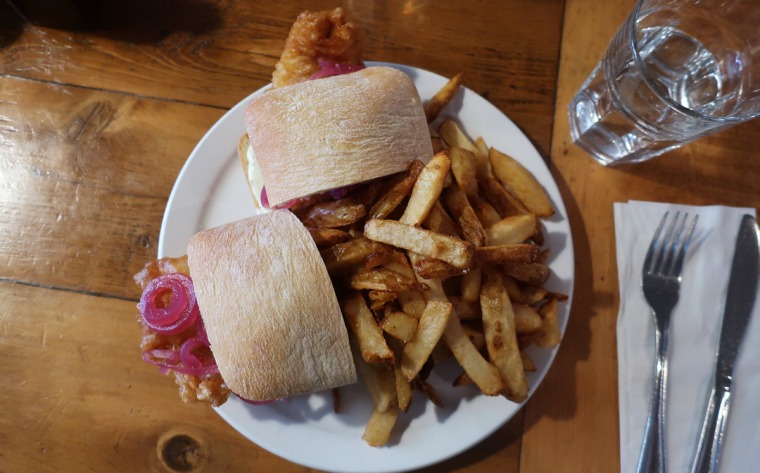 It’s quite tasty.  The sandwich easily could have been too rich, but they wisely pile on a whole bunch of zingy pickled onions, not to mention a generous amount of tangy tartar sauce.  This balances things out quite nicely.  The hearty ciabatta holds together well, and proves to be an ideal vehicle for the hearty sandwich. 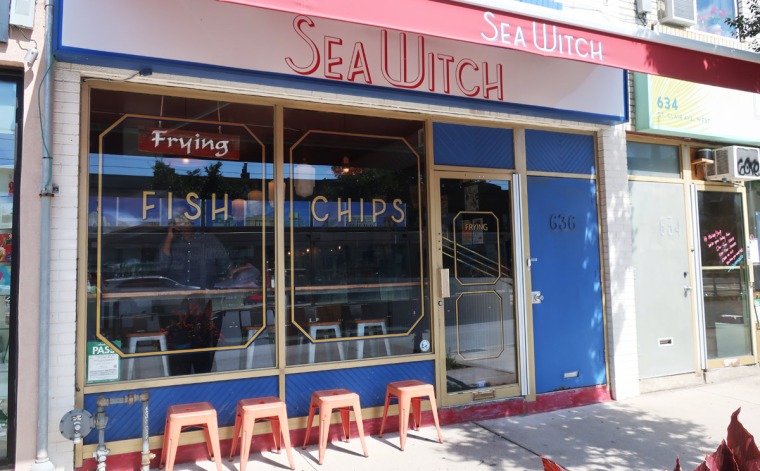 As for the fish itself, it’s good, though it’s not outstanding — the batter is slightly too substantial, and the fish is a bit overcooked and dry.  Still, with all of the other stuff going on, it works just fine.

The fries are the highlight.  They’re crispy, creamy, and substantial; they’re basically the perfect fish and chips chips. 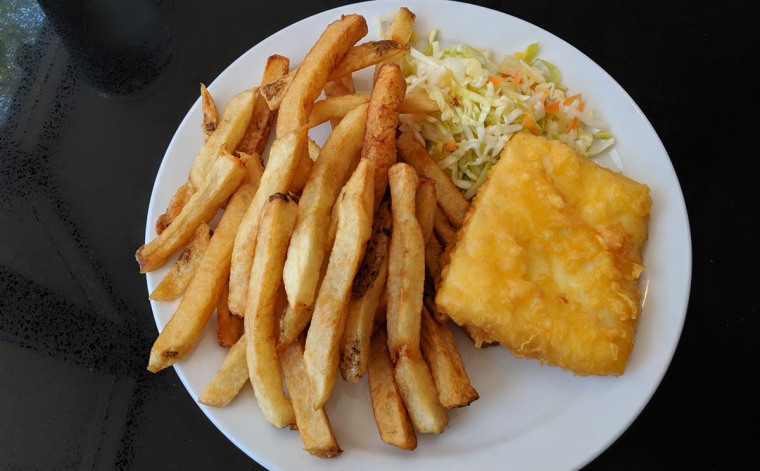 Halibut House is a fish and chips chain with over 20 locations around the GTA, though I didn’t even know it existed until very recently.

I don’t think it’s going to blow anyone’s mind, but if you’re looking for a tasty plate of fish and chips, you could do a lot worse. 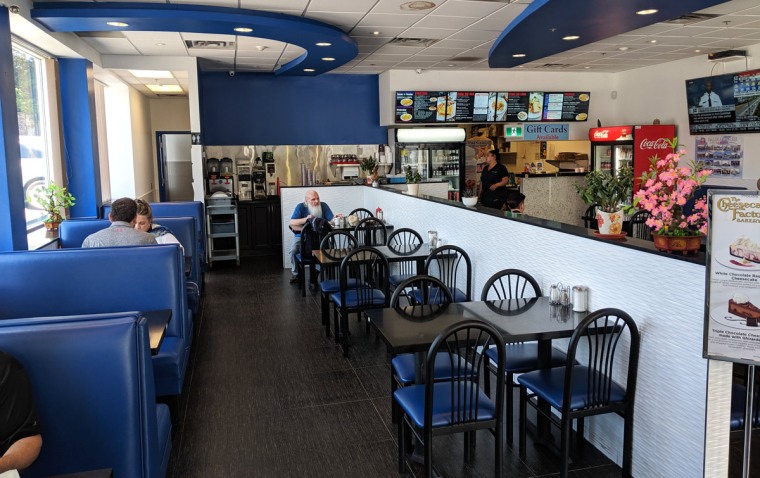 It’s also a decent deal.  You can get a half plate for about eleven bucks, which comes with a piece of halibut (of course), fries, and coleslaw.  The fish is on the smaller side, but the pile of fries is generous enough that it’s pretty much guaranteed to fill you up. 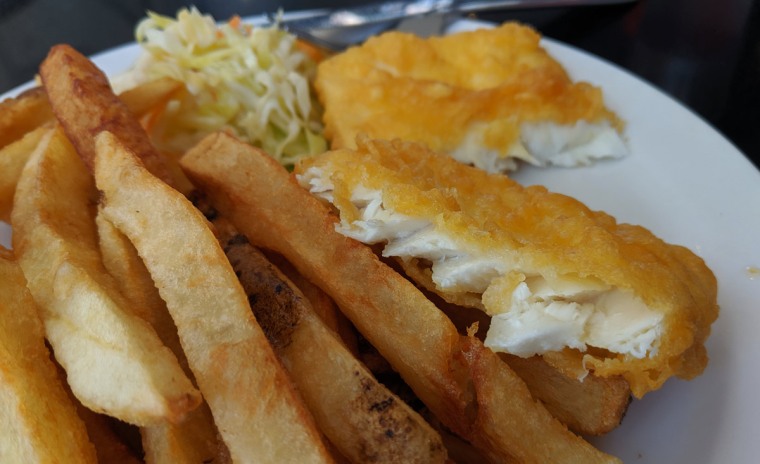 The fish itself is a bit overcooked (it was quite dry), but the flavour was nice, and the batter was just right.  A lot of places tend to overwhelm the fish with a thick, overly-crunchy coating, but the batter here was nice and crispy while still allowing the fish to be the star of the show. 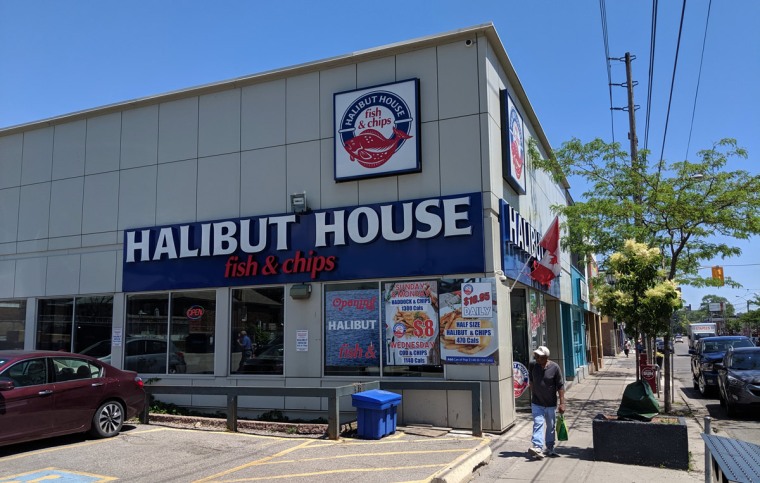 The fries are the highlight.  They’re crispy, creamy, and very tasty.  The coleslaw is a bit bland, but it’s fine, and the tartar sauce is creamy and zesty (if a bit overly oniony).  It’s a solid plate of fish and chips. 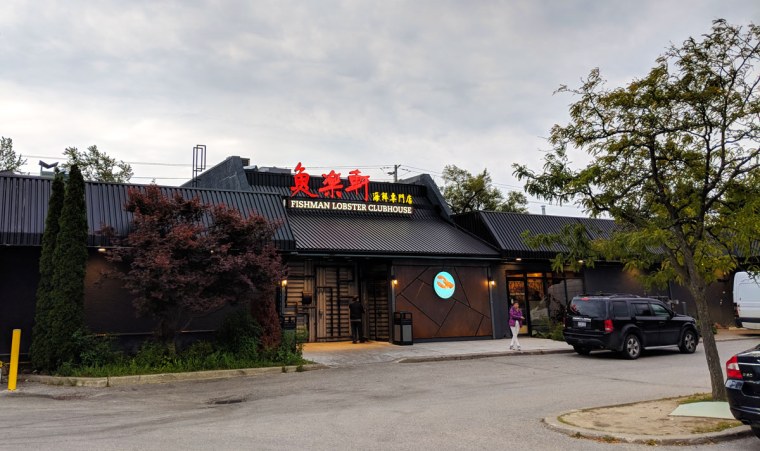 Is it even possible to see the impressively enormous piles of lobster or crab at Fishman Lobster Clubhouse and not want to immediately go there?  I don’t think it is!

I’ve been drooling over those piles on Instagram for some time now, not to mention on David Chang’s amazing Netflix show, Ugly Delicious.  But you need a big group to really do the place justice, so I had to bide my time until a large enough group could be assembled.

I recently went with a group of ten, and yeah, we did the place justice.

We started with a few different dishes — soup, braised beef, greens, fried rice, noodles — and they were all tasty enough, but that’s not the reason you’re there.

We ordered a twenty pound pile of lobster, which consisted of two enormous beasts that they actually brought to the table before the meal started (a lot of people like to pose for pre-dinner photographs with their lobsters or crabs, which felt like a bit much to me). 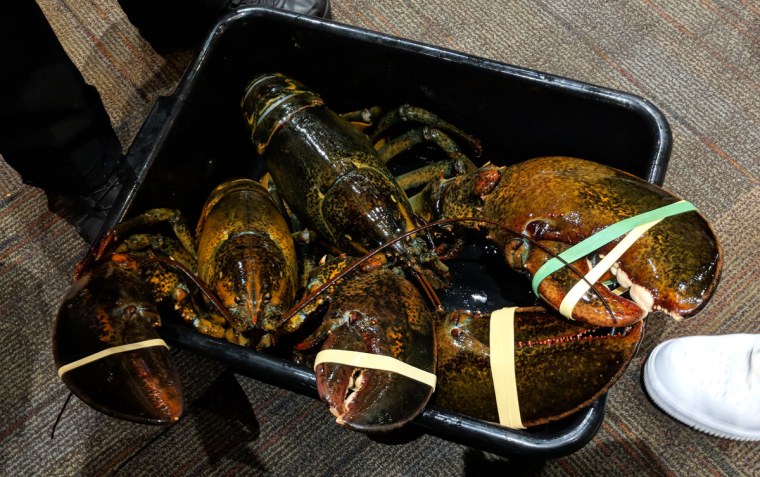 Later, the mountain arrives.  And it’s an awe-inspiring sight: a seemingly endless amount of deep-fried lobster chunks, a whole bunch of fries, and enough crispy fried garlic bits to launch a vampire genocide.

It’s so good.  The lobster is cut up into easy-to-eat chunks; it’s still on the shell, but the meat is accessible without the need for any shell-crunching tools.  Which is good, because there’s a lot of lobster there — there’s no time to mess around with cracking shells.  There’s a whole bunch of lobster to eat. 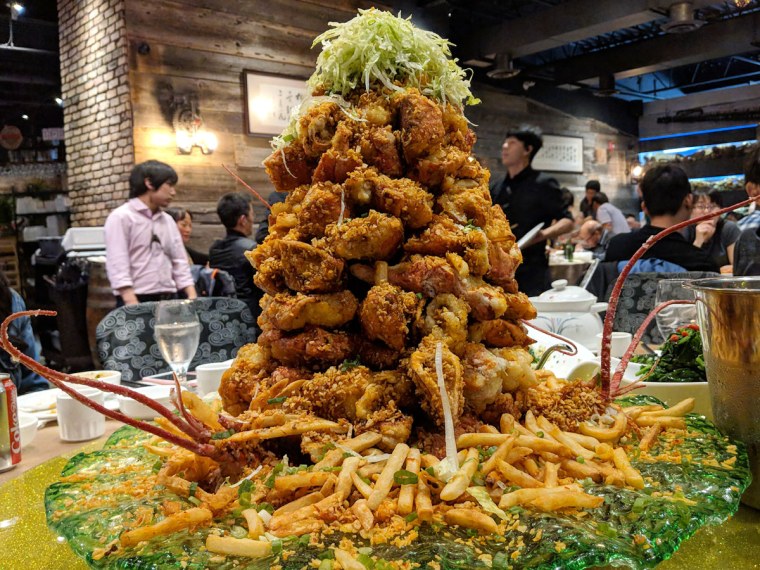 It’s more lobster than I’ve ever had in a single meal, and it’s so tasty; the meat is tender, garlicky, a little bit sweet, and has some nice fried crispy bits.  That’s not to mention the fried garlic, which is surprisingly addictive (you’re going to reek of garlic for about 24 hours after eating here; deal with it).

I ate an insane amount of lobster.  I was so full.  It was one of the most memorable meals I’ve had in a while.