The Pho Beef Banh Mi at Just Braise in Oakville is pretty much exactly what you want it to be; it is the Brundlefly version of a bowl of pho and a banh mi, and it’s delicious.

The combo of the beef and the pho sauce does a great job of capturing the flavour of that particular soup.  The only issue: the beef was actually pretty dry, which holds the sandwich back from greatness.

Everything else was quite tasty — the pickled veggies and the crunchy cucumber add a nice bright counterpoint to the savoury beef, and the garlic mayo / hoisin / sriracha combo compliments the beef very well.

It helps that the bread is perfect; it’s lightly crispy on the outside, with a great fluffy interior.  It’s a tasty sandwich.

I’m traveling, so this site is going into hibernation for a while.  Feel free to follow my travels at Up in the Nusair (or don’t, I can’t force you… or can I??  No, I can’t… yet).

But first, here’s a few very quick reviews of places I didn’t get a chance to write full posts for before I left. 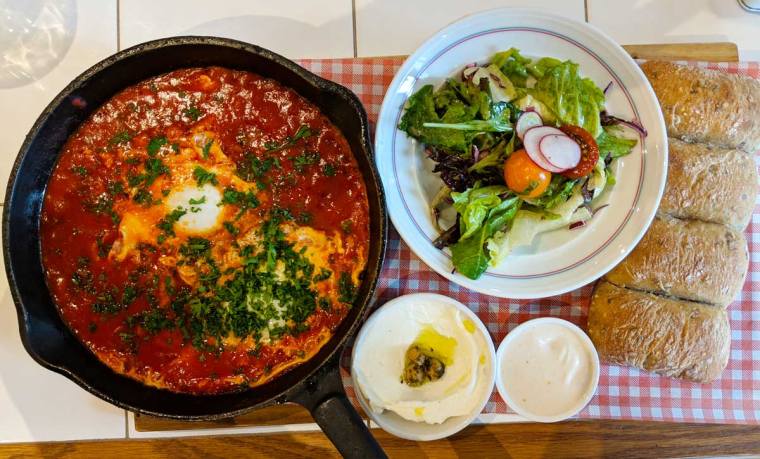 I actually visited this place a couple of times recently.  The first time I had the shakshuka, which was quite tasty and comes with an almost absurd amount of food.  It’s a little bit bland, but it comes with an ample amount of fresh bread for dipping, and the tahini sauce helps amp things up.

The second time I had the Sinia Kebab, which features beef kebabs and some grilled veggies on top of freshly baked flatbread, topped with a tahini sauce.  This was quite tasty, though it really needs something acidic to cut through the richness.  I eventually wound up spooning in some of the salad that comes on the side.  I’m not sure if that’s the intent, but it helped. 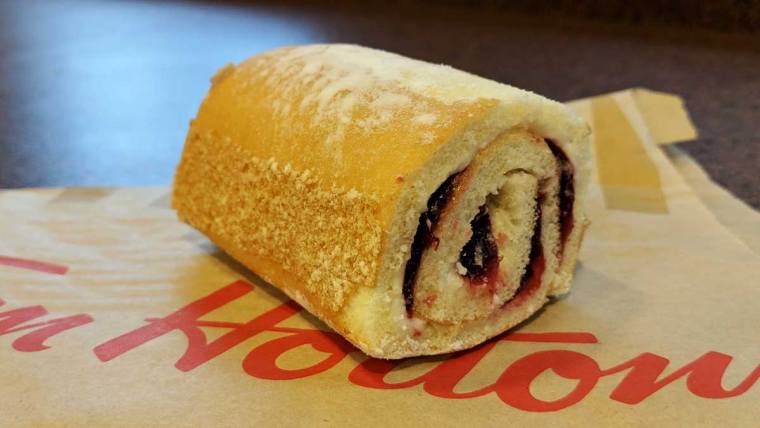 It’s a jelly roll from Tim Hortons; it tastes exactly how you think it’s going to taste.  It’s basically a very minor upgrade over Little Debbie.  It’s pretty junky, but I enjoyed it.

Pho from I Love Pho 2 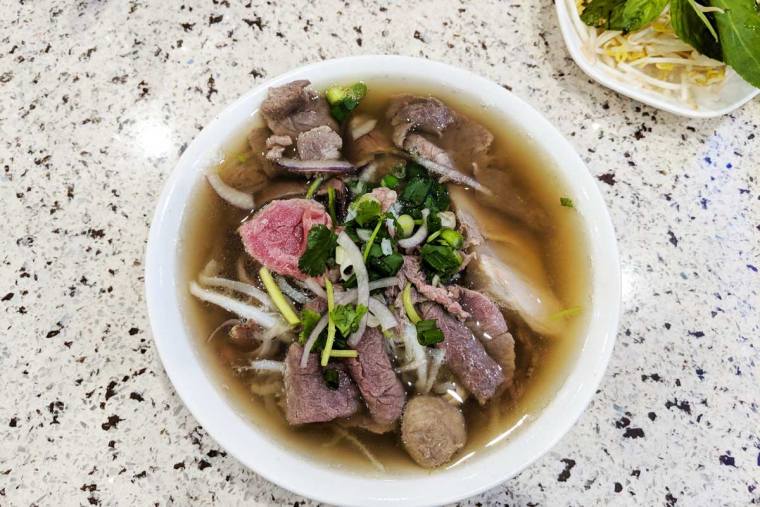 I already wrote about the surprisingly great I Love Pho 2, and the pho confirms it: this is a place that knows their stuff.  The broth has a really great flavour, and the variety of meats they mix in are all perfectly cooked and tasty. 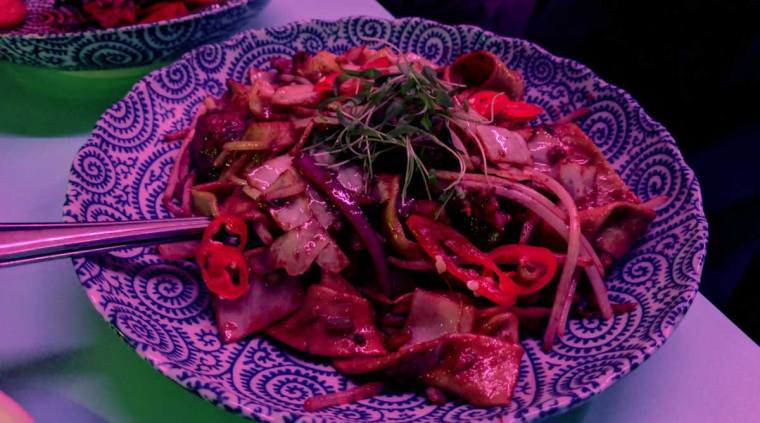 I tried a handful of dishes at SoSo Food Club.  Everything was tasty, but the highlight was the addictively cumin-tinged lamb biang biang noodles.  The strong cumin flavour, the tender lamb, and the extra-broad noodles all work very well together.  The mapo tofu, with its numbing heat and silky tofu, was another highlight. 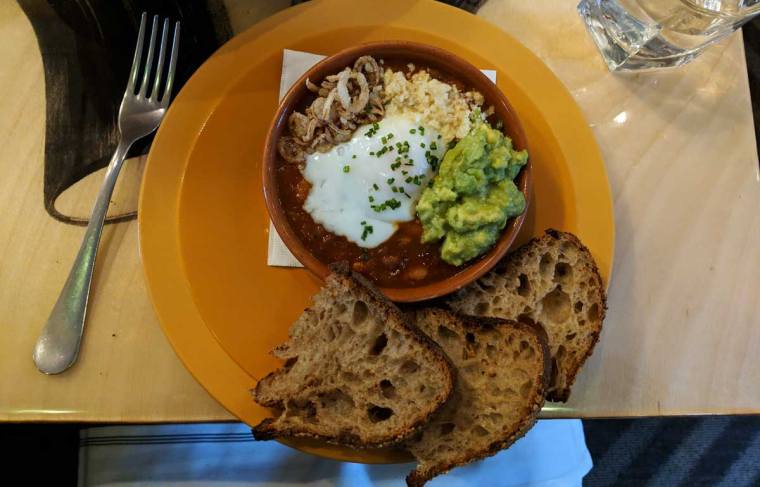 The bread here is amazing.  Like at Terroni, you have to pay for it, but unlike at that place, it wasn’t infuriating.  It was well worth paying for.  I came here at brunch and had the trapper beans, which had a lot going on, but everything worked perfectly together.  In particular, the beans had a savoury richness (and a complete lack of sweetness) that made them quite unlike any baked beans I’ve had before.

This was fine, I guess.  I actually had mango pancakes in Hong Kong, and they were ridiculously good.  I was hoping these would recapture that, even slightly, but no such luck.  Aside from the fact that they’re not actually pancakes (they’re crepes), the mango was underripe and crunchy, and I think the cream was actually Cool Whip or something similar.  Still, it was decent enough for what it was.

Oh man, this shawarma.  I actually visited this place based on a tweet from Suresh Doss — he called it the best shawarma in the GTA, which should really tell you all you need to know.  The man knows his food, and he’s certainly not wrong about Ghadir.  It’s amazing.  It’s got the perfect blend of tender meat with lots of crispy bits, tasty sauces, and fresh veggies.  If it’s not the best shawarma in the GTA, it’s certainly a very strong contender for that crown.

The pho at Pho Vistro was fine.  There wasn’t anything particularly wrong with it, and I didn’t dislike eating it.

But it made no real impression on me; my biggest takeaway is that it was food and I ate it.  It wasn’t memorable in any particular way.

They have a few different varieties of pho on the menu; I ordered the restaurant’s namesake dish, which features beef and chicken.

The broth had a nice, clean chicken flavour, but almost none of the distinctive spicing you expect from a good bowl of pho.  They have a couple of bottles of sauce on the table that add a nice dose of spice and zestiness; these are absolutely essential.  On its own, the soup is seriously bland. 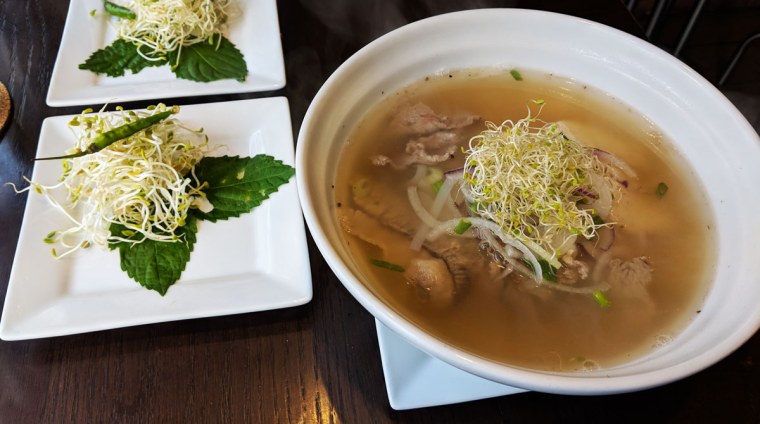 The slices of chicken and beef are okay, but they all had a vaguely leftovery flavour, and they’re all a bit tough.

The broad rice noodles are what you’d expect. They’re good.

It all adds up to a very inoffensive meal that I can’t imagine anyone getting too excited over.