Though restaurants serving Texas-style BBQ have become a dime a dozen in the GTA, Adamson was among the first in that trend, and if you ask pretty much anybody, they’re the best.

I tried it once a couple of years ago, and I’ll admit that I wasn’t convinced.  I found the food to be tasty enough, but it was hampered by some fairly serious issues (most pressingly: a complete lack of smoky flavour, improperly sliced brisket, and mediocre pulled pork).

Well, I just tried their new Aurora location, and it was (mostly) a much, much better experience. 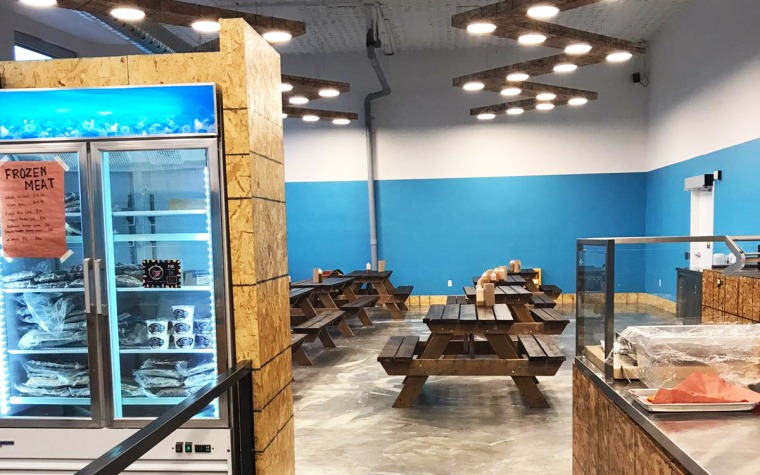 I will say that ordering take-out is probably not the best way to go (though it is, for obvious reasons, the only way to go right now).  When you pre-order on their website, all the meats come tightly wrapped in butcher paper, and the whole thing is sealed in a foil take-out container.  You also can’t specify a pick-up time other than before or after 4:00 PM.  This means that the meat effectively continues to cook in the tray, and is a bit more dry than it should be by the time you eat it.

Even still, it was quite tasty.  I tried basically everything on the menu: beef brisket, spare ribs, turkey breast, pulled pork, and a couple of sausages (bratwurst and jalapeno cheddar).

The brisket is their claim to fame, and yeah, it’s very good.  It could have been more tender (see: the aforementioned take-out issue), but it was otherwise top-shelf brisket.  It was quite smoky, it had a good amount of tender fat (the fat wasn’t quite as well rendered as you’d like, but that’s a minor complaint — it was mostly very creamy), and the bark was really tasty.  Texas-style barbecue is traditionally seasoned with just salt and pepper, and while it tasted like there might have been a bit more going on here, it was quite good.

Everything else was (mostly) really tasty.  The turkey was smoky and tender, the ribs had a great texture and more of that delightful smoke flavour (though they did taste a bit over-brined), and both sausages were top-notch, particularly the jalapeno cheddar.

The pulled pork was even worse than I remembered it, however.  It was incredibly dry, it had zero smoky flavour, and it had that underlying gaminess that you only get from pork that’s been reheated one time too many.  I’d be absolutely shocked if it was cooked the same day I ate it.

I also tried the baked beans and the coleslaw, and while neither was anything to get too excited about (the baked beans tasted more like some kind of bean stew than like traditional baked beans), but they were both tasty enough.