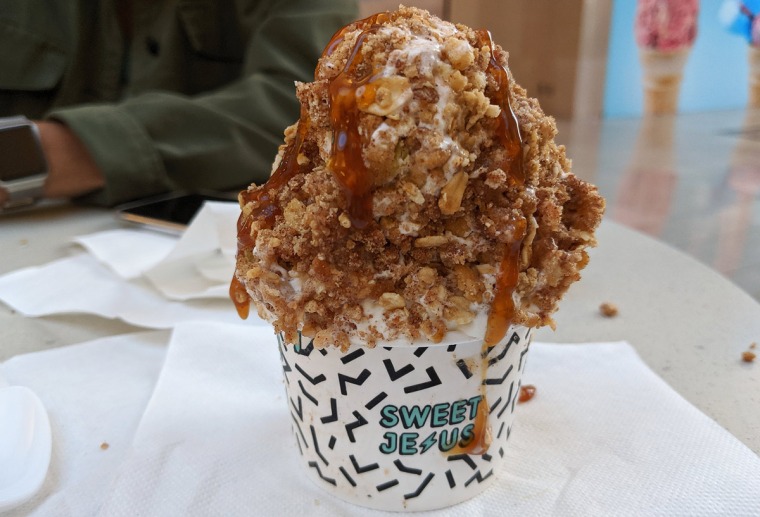 This was actually pretty tasty.  Here’s how Sweet Jesus describes the Apple Fritter Crisp: “Vanilla soft serve, Apple pie sauce, Apple fritter pieces, Apple fritter crumb, Caramel sauce.”  I enjoyed it, mostly — it pretty much nails the apple pie/crumble element, with a cinnamon-infused flavour, and a nice hit of caramel and apples.  But the “apple fritter crumb” it’s rolled in was more chewy than crispy (there was a disconcerting lack of crispiness for something with “crisp” in its name), and the apple fritter pieces were entirely absent.  Still, the creamy vanilla ice cream and the apple-crumble-infused flavour are a tasty combo. 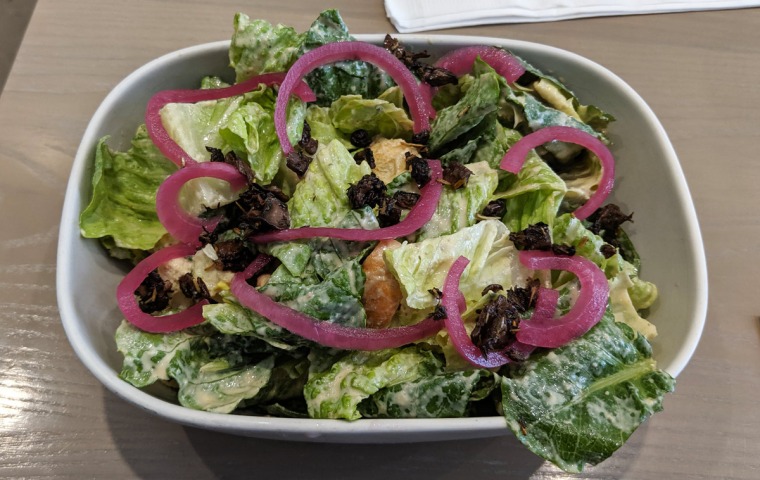 I recently found myself back at Parka Food Co., a place that specializes in vegan eats; on my first visit I had a sandwich and found the bun to be fairly horrifying, so I skipped the sandwiches and went with a Caesar salad instead.  It was fine, I guess?  Caesar dressing traditionally features very non-vegan ingredients like anchovies, egg yolks, and cheese; whatever vegan alternatives they used here were decent enough.  But the dressing was overly vinegary, and the pickled onions on top are a bizarre choice — they only amplify the puckery vinegar flavour.

Both of these tarts were absolutely fantastic, particularly the Raspberry Rosewater tart, which featured an ultra-rich custard with a pronounced rosewater flavour that complimented the tart raspberries on top perfectly.  And unlike the last pie I had at this place, the crust was superlative; it was crispy, buttery, and perfect.