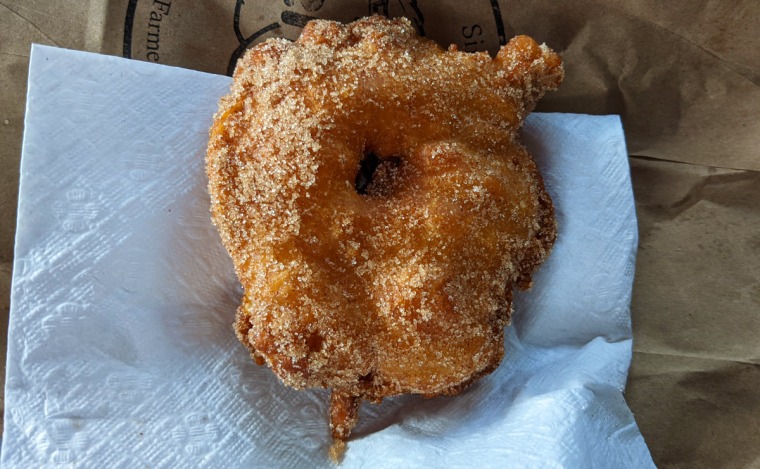 The apple fritters at The Fritter Co. in St. Jacobs Market are popular.  I’ve been hearing about them for years, so when I recently found myself in St. Jacobs, checking them out was a must. 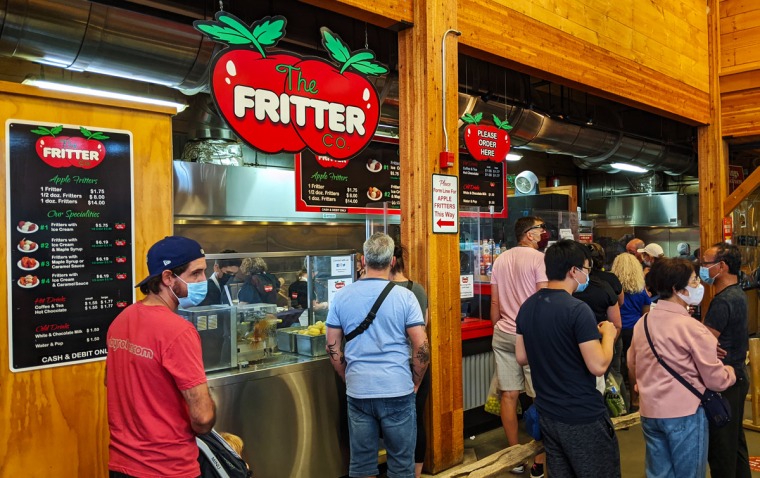 The first challenge: actually finding the place in the surprisingly massive St. Jacobs Market compound, which encompasses several enormous buildings and a seemingly endless outdoor market.  I’m not sure where the largest farmers’ market in the world is, but I have to imagine this one is in the top 10.

The second challenge: mustering up the patience to stand in the gigantic, slow-moving line, which wound up taking about half an hour.

Maybe after all of that, no fritter could have lived up to my sky-high expectations, but the apple fritter here was… not very good?  This place is universally beloved, and sorry everybody, but I don’t get it.

The fritter is interesting, I’ll give it that — each one features a full apple ring that’s the approximate thickness of a finger.  And I did enjoy the contrast between the very tart apple slice and the sweetness of the sugary exterior.  But the crisp apple slice also seems to impact the pastry itself, which was slightly undercooked around the middle in both of the fritters I tried.

Otherwise, the very pancake-like pastry was fine, I guess?  And the whole thing was certainly not unpleasant to eat (the fact that they serve them piping hot from the fryer helps), but was it worth the epic half hour line-up?  Absolutely not.  If you’re coming from Toronto, save yourself the time and just go to San Remo or Dipped Donuts.  You’re welcome.

Harmony Lunch makes me mad.  Not because the food is bad — it’s actually quite good.  That’s the problem.

I went to the University of Waterloo, so I lived in the area for four years, and I somehow managed to go that entire time without knowing that this place existed.  To add insult to injury: it’s right around the corner from the Princess Cinema, an art house theatre that was a regular destination for me during my time in Waterloo.  So it was right there, and I had no idea.

Harmony Lunch is a legit old-school diner (it’s been around since 1930) that’s mostly known for their pork-based hamburgers that are served with a generous amount of griddled onions (along with tomato, relish, mustard, and American cheese).

It’s basically a classic griddled hamburger, only with pork instead of beef.  I missed the beef — in the context of a hamburger, the much milder flavour of pork feels like a downgrade when you’re expecting that nice beefy hit.  But then I’m kinda burger-obsessed, so maybe I’m biased.

Certainly, it’s hard to complain too much when the final product is so tasty.  The patty is otherwise just right, with a good texture, a nice amount of crust from the griddle, and a satisfying juiciness.  And the combo of the pork patty, the soft griddled onions, and the gooey American cheese is hard to resist.

It’s all on a soft, fresh bun that’s been lightly toasted on both sides, and that suits the burger perfectly.

I got it with the house salad on the side, which was nicely prepared and featured a deliciously zingy dressing.

So… how did I manage to live in Waterloo for four years without knowing about this place??  Who should I be furious at?  I need to direct this anger somewhere.