Though Grand Electric doesn’t get nearly the amount of buzz that it did when it first opened, it’s still chugging along.  In fact, they’ve just recently opened a new location a bit further east on Queen (though it’s still on the west end of the city).

When I visited the original location a few years ago, they had some pretty out-there stuff on the menu, like a scrapple taco and pig head fries.

The menu here is much less ambitious than that — there’s nothing beyond the usual suspects (chicken, fried fish, etc.).

It might not be particularly exciting, but if the two tacos I tried were anything to go by, they still know exactly what they’re doing.

The first one I tried was the shrimp taco, which consists of a few generously-sized pieces of fried shrimp topped with a zesty sauce, lettuce, onion, and cilantro.

The shrimp is nicely seasoned and perfectly cooked, with a crunchy exterior that doesn’t overwhelm.  The sauce basically tastes like a variation on shrimp sauce, and the other components add a good amount of freshness.  It’s a solid taco. 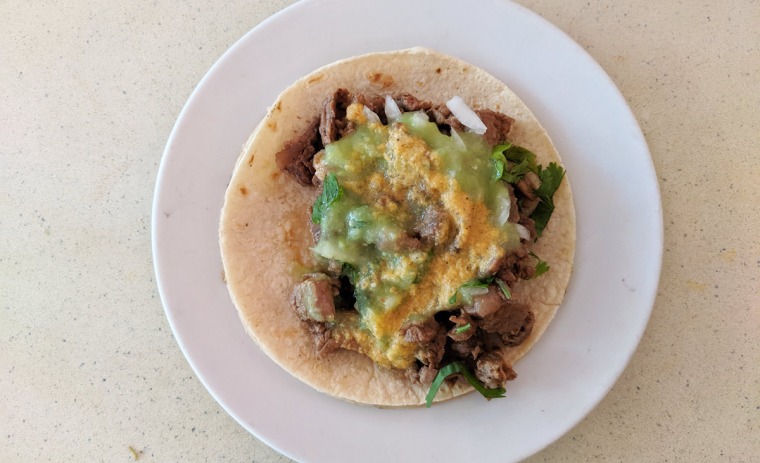 Up next was the Carne Asada, which features steak topped with cilantro, chopped onions, and a couple of salsas.  This was even better than the shrimp; the steak was super tender and very nicely marinated, with a nice vibrant flavour that never overwhelms its beefiness.  And the salsas compliment it perfectly.