Flora’s Deli is a delightful little shop that offers a takeout menu (they also have a couple of small tables outside) of Italian sandwiches.  It doesn’t have the most exciting menu ever, with the usual veal and eggplant sandwiches, various cold cut assortments, etc.

The sandwiches are so well executed, however, that this never feels like an issue.  The Norma Gina is generally what people talk about when they talk about this place, and yeah, I can see why.  Served on a fresh sesame seed roll and featuring a generous amount of fried eggplant topped with hot honey,  creamy whipped ricotta, and fresh arugula, it’s a great sandwich.

The eggplant is perfectly cooked, the ricotta adds a delightful richness, the arugula is nice and peppery, and the honey adds a subtle sweetness that contrasts nicely with the savoury sandwich.

I also tried the Sofia, which the menu describes as “prosciutto, coppa, sopressata, fresh mozzarella, roasted red peppers, arugula, 6yr balsamico.”  This one’s a pretty standard cold cut sandwich, but when you’ve got top-notch ingredients that all complement each other so well, there’s absolutely no need to reinvent the wheel.  I sort of figured the eggplant sandwich would be the more interesting of the two, but I’d honestly have a hard time picking a favourite; they’re both so good.

(I should also note that since I wrote this, the restaurant’s pop-up location is no more, but supposedly a permanent spot is in the works.) 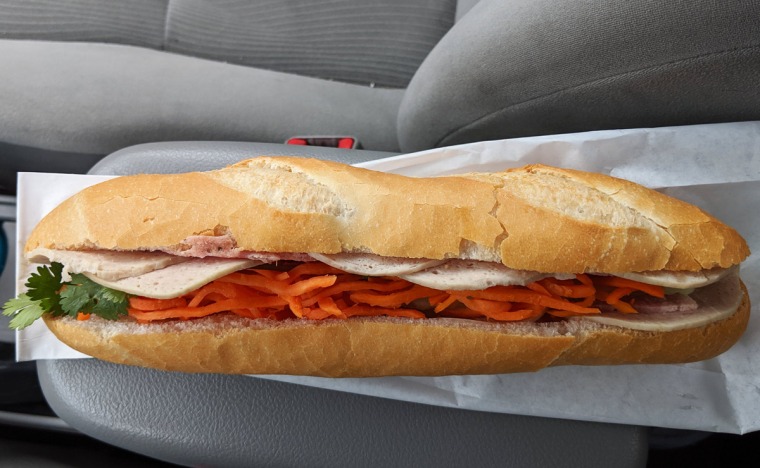 The menu’s pretty basic — they have seven different types of banh mi, and they all cost $3.50.  I went with the assorted, which comes with the usual medley of Vietnamese cold cuts, pate, and pickled veg.

Nothing about it particularly jumped out at me, but for $3.50 for a hefty sandwich, it’s hard to complain too much.

I will complain a little bit, though.  In particular, there’s so little pate that I couldn’t even taste it, the cold cuts were ho-hum, and the bread pretty much wrecked the roof of my mouth (though it was otherwise fresh and tasty).

Still, it was a tasty sandwich; it just wasn’t anything too mind-blowing. 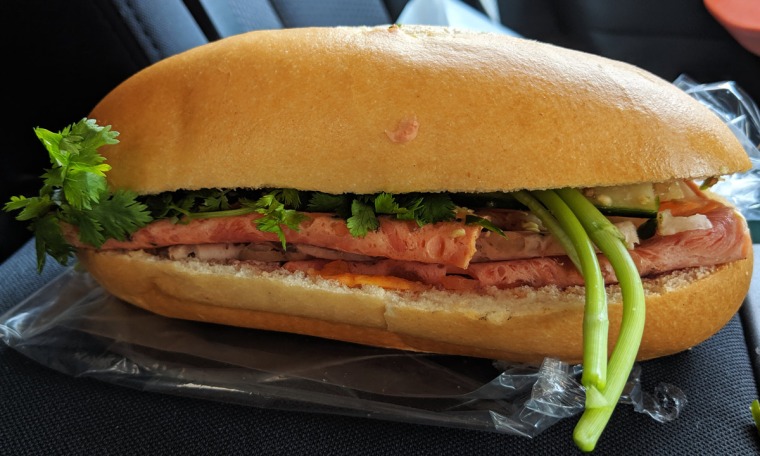 Like many banh mi joints, Rose’s Vietnamese Sandwiches is ridiculously cheap.  I had the standard cold cut banh mi, which is crammed with meat and pate, and costs a paltry three bucks.

This is simultaneously amazing — cheap, delicious food! — and crappy.  There’s an unfair expectation that a lot of Asian or Latin American cuisine should be served for rock-bottom prices, which makes it unnecessarily difficult for the people who run those restaurants to make a living.

I’m not going to rehash what many other people have written on the subject, but it does kinda give you pause.

Setting that aside?  It’s a tasty sandwich.  The assorted meats banh mi is the classic — it’s got Vietnamese cold cuts, chunky pate, pickled veggies, and cilantro.

It’s really tasty; there’s a lot of meat, but it’s perfectly balanced out by the sweet, vinegary pickled veggies, not to mention the abundant fresh cilantro.  It’s definitely a contender for  the best banh mi in the city, though I think there are a couple of things holding it back from greatness.

The biggest issue: I wish it had more pate.  It has a thin spread of pate that’s entirely overwhelmed by the sizable layer of cold cuts.  You miss out on the satisfying contrast between the meaty cold cuts and the creamy, minerally pate.

The other issue is the bread.  It’s certainly not bad, but the exterior doesn’t quite have the light crispiness you’re looking for, and the whole thing is a bit dry.

Still, those are fairly minor complaints — it’s a solid banh mi, it’s just not quite up there with the best that I’ve had.

Mii is a small fast food chain specializing in quick Vietnamese eats.  As far as I know it’s only in mall food courts, which kinda makes you think it’s not going to be very good.

(Also, the name seems like a lawsuit from Nintendo waiting to happen.  It’s a bit puzzling.)

Well, I just tried their classic banh mi, and I was shocked at how much I enjoyed it.  It’s certainly not the best banh mi I’ve ever had, but it gets pretty much everything right, and very little wrong.

Basically: it’s not the bastardization you’d expect from the food court in Yorkdale.  It’s legit.

It’s seven bucks, so it’s somewhat pricey by banh mi standards, but it’s a hefty sandwich; considering the location, you really can’t expect it to be much cheaper. 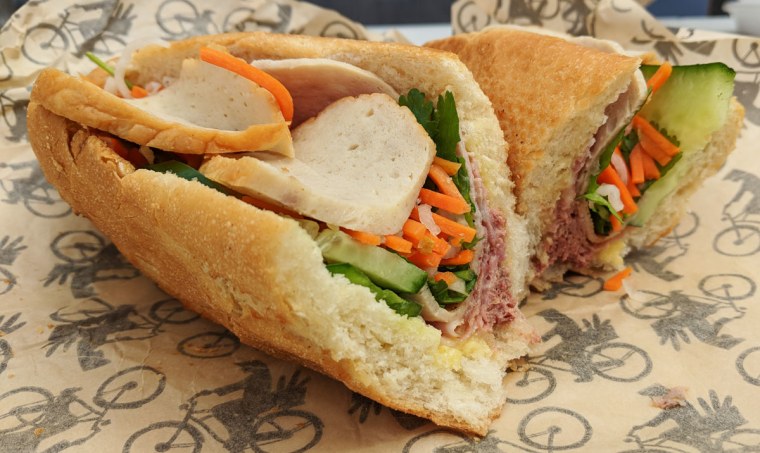 Everything is as it should be: a nice slathering of butter, a healthy amount of chunky pate, a variety of cold cuts, and a good proportion of veggies and cilantro.  There was some kind of dark sauce that was a little bit too sweet for my taste, but aside from that, it was a tasty sammich.

The baguette was quite good, too; maybe a little bit too crunchy on its exterior, but otherwise soft and fresh.