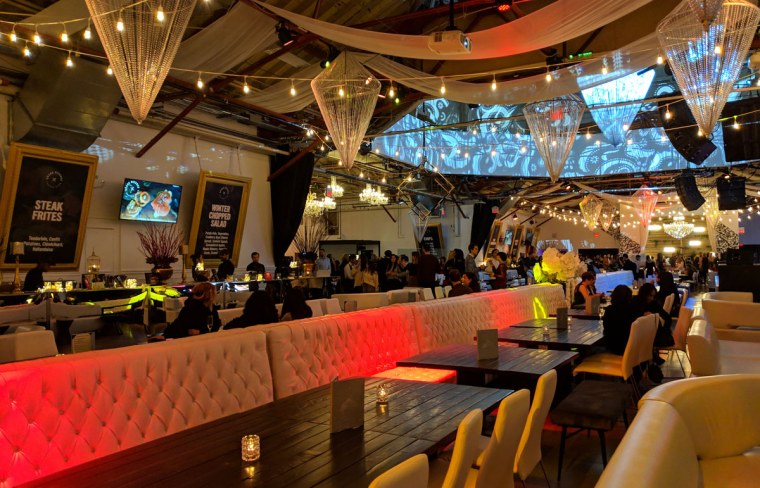 I very randomly got an email about a month ago inviting me to the media preview of a new “supper club” called Grand Bizarre.  Anything with the word “club” in its name doesn’t particularly sound like my jam — but you know what is my jam?  Free food.  I quickly found a friend who was willing to go with me (the promise of the aforementioned free food made this an easy enough proposition), and I was off to the races.

The place is a bit odd; it opens once a week on Saturday nights, and it’s somewhere between a nightclub and a food court.  It’s an absolutely massive space, with several food vendors, a whole bunch of bartenders, and a DJ playing loud, thrumming dance music that makes it nearly impossible to talk (though thankfully, my dining companion and I were able to find a spot near the sushi bar that wasn’t quite as ear-splittingly loud as the rest of the joint).

One of the main gimmicks is that instead of paying cash for the various foodstuffs, you buy “Bizarre chips,” which look like poker chips and which act like currency to buy food.  I believe you still have to pay regular cash for the drinks, though I’m not entirely sure — it was an open bar during the media preview, which made me super glad I drove there instead of taking public transit.  I did, however, manage to have several free soda waters, so who’s the real winner here?  (please don’t answer that.)

They gave everybody nine Bizarre chips, which is worth 30 bucks, and which was enough to get a decent amount of food.  I managed to try a few things.

The first thing I tried (and easily the highlight of the night) was the fried chicken bao: “pimento cheese, bacon onion jam, pickled carrot slaw, bacon onion jam, steam bun.”  It cost five Bizarre chips, or about $16.50, and comes with a side of potato chips.

It was a solid sandwich.  The only real issue (though it was a big one) is that the fried chicken patty was way overcooked, and had clearly been sitting out for a while.  It was tasty, with a nice crispy exterior, but the meat was dry and lukewarm. 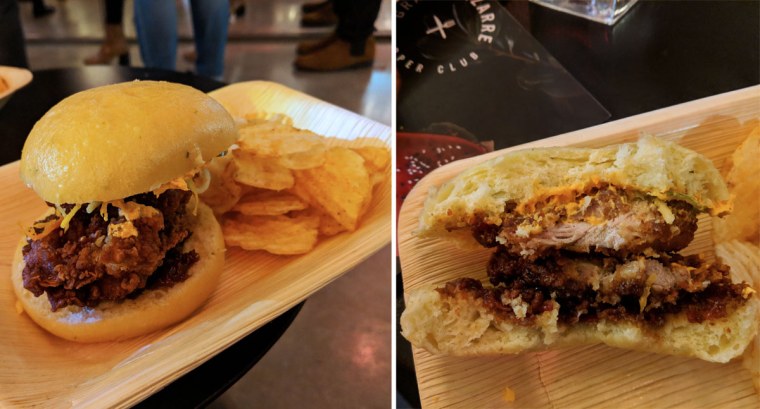 Everything else was quite good, with the amazing bacon onion jam easily being the star of the show.  It was an absolute taste bonanza, with a perfect combo of sweet and savoury.  I want to buy a big jar of this so I can eat it on everything.

Between the rich pimento cheese, the vinegary bite of the slaw, the spice of the jalapenos, and the sweet/savory combo of the bacon onion jam, it was a great balance of tastes and textures.

The bun was interesting.  It was somewhere between a Chinese bao and a hamburger bun, and was actually quite good.

If the chicken were fresh and not overcooked this would have been a fantastic sandwich, but even as it was it I enjoyed it.

Next up: the sushi area was selling a few dim sum classics along with the raw fish.  We tried the har gow (shrimp dumplings) and siu mai (chicken dumplings); each order came with four, and cost three Bizarre chips.

They were both horrifically bad.

The shrimp, I guess, was the better of the two.  It had obviously been sitting in a warming tray for way too long, because the wrapper basically disintegrated in my mouth, and the filling was off-puttingly squishy, with a few rock-hard shrimp bits.  The whole thing was absolute mush through and through (aside from the tiny little shrimp bits).  The flavour was fine, however. 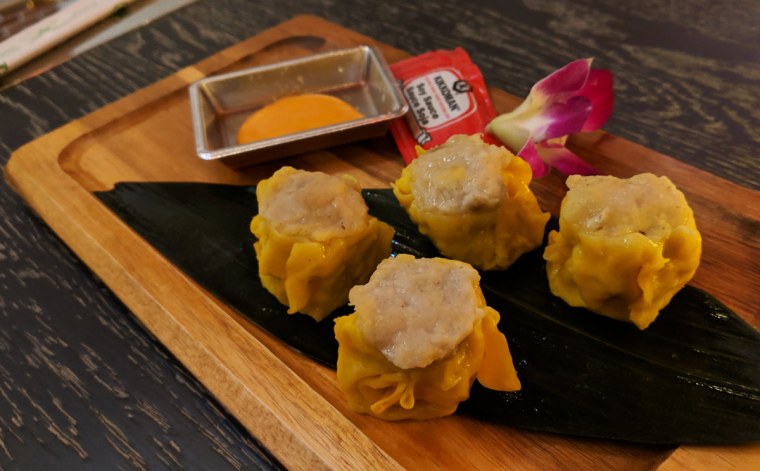 The pork, on the other hand, was flat-out disgusting.  It was dry and tough and took a distressingly long time to chew.  And something about the flavour was just off.  I’m not gonna lie: it was barely fit for human consumption.

They’re also hilariously overpriced.  Each order was three chips (or ten dollars in human currency) for four pieces.  That’s more than double what you’ll pay for an infinitely better version of these at literally any dim sum place in the GTA (seriously: they’re the worst version I’ve had of both dishes by far).  So please: do not order these.  They’re bad and they’ll make you feel bad.

There were a handful of other savoury options (pizza, sushi, salad, etc.), but at this point we moved on to dessert.  We only had two Bizarre chips left between the two of us, so we found the one thing in the whole place that cost two (pretty much everything was between three and twelve chips).

I can’t remember what it was called and I forgot to take a photo of the menu at this particular area (I’ll bet they’re really glad they invited me to create this quality content), but whatever it was, it was fine.  It was chocolately, with a texture somewhere between a brownie and pudding.  It was a bit too gluey, but it had a nice chocolate flavour and some interesting spices that gave it an almost gingerbread-like taste profile.

There was also an area selling Cheesecake Factory cheesecakes and cupcakes that were free during the media night, so of course I had a slice of cheesecake and a cupcake. 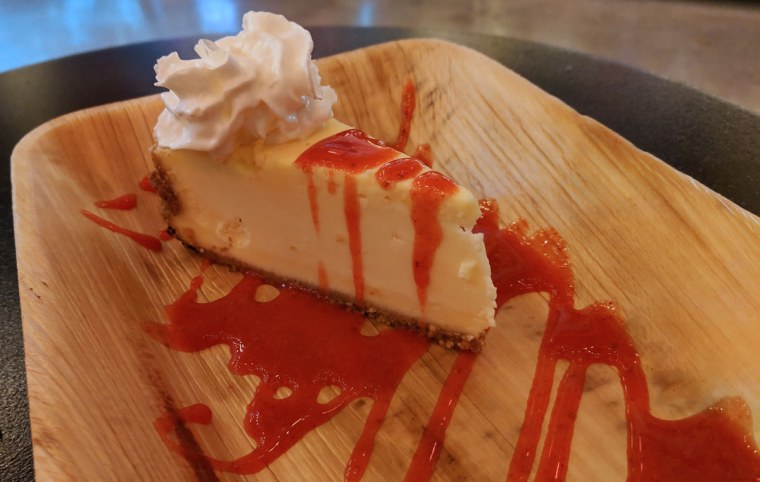 This was actually my first time trying the cheesecake from the Cheesecake Factory, and it was fine, I guess?  Even by the standards of boxed cheesecake it wasn’t that great (I think President’s Choice is better), but it was cheesecake and I ate it.  It was tasty enough.

The cupcake was about in line with the cheesecake.  There wasn’t anything blatantly wrong with it, but it’s safe to say that the cupcakes at basically any bakery will be tastier.

And that was that.  As I mentioned, the whole format isn’t really my thing, and the food wasn’t nearly good enough to make me ever want to come back here again.  But if you’re into nightclubs and you’re also hungry, it’s a thing you could do, I guess?