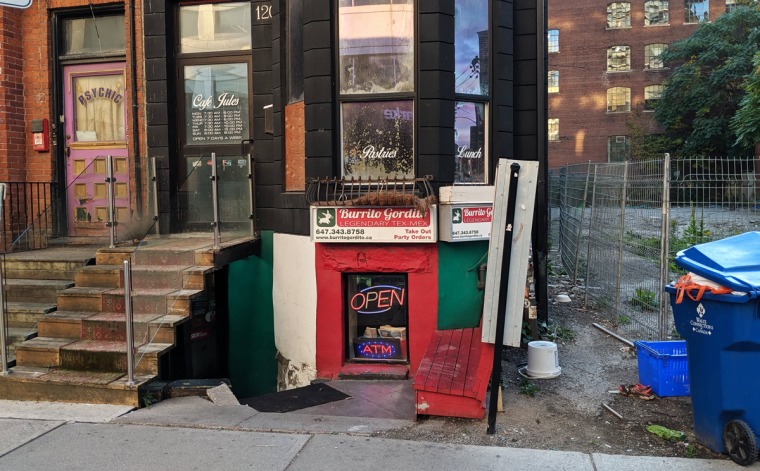 It’s hard to imagine this now, but there was a time in Toronto when you couldn’t find a shop selling baby-sized burritos on every other block.  But of course, Burrito Boyz opened on Peter Street in 2003 and basically launched a city-wide obsession.

After a split between the owners, that spot became Burrito Banditos, and now it’s Burrito Gordito.  I have no idea if either of the original Burrito Boyz boys are involved here, but the menu is pretty much the same.

I ordered the steak burrito, which was always my favourite back in the original Burrito Boyz days, and yeah, it’s still good.  I don’t know if it’s quite as tasty as I remember it being way back in the early aughts, but then how can you possibly compete with warm and fuzzy memories from well over a decade ago?

The quality of the steak itself is quite good, and there’s a generous amount of it.  It’s nice and tender but still has a satisfying chew, and it has a mild but enjoyable beefy flavour.

As for the rest of it, it’s as crammed with rice, beans, and sauces as you’re expecting, with a nice variety of zippy flavours.  I ordered it spicy and it was barely hot at all (I remember it being legitimately fiery back in the Burrito Boyz days), but aside from that it’s quite satisfying.

It’s also nicely toasted on the outside — they even roll it over to toast it on its sides, which is a nice touch.