McDonald’s is making a big hullabaloo about their “remastered” classic burgers (the Big Mac, the Quarter Pounder with Cheese, and the Cheeseburger).  This includes a promotion where you can get a Big Mac for three bucks, so I figured it was worth a shot.

The improvements, according to McDonald’s:

I got a Big Mac, and… I don’t know.  It’s a Big Mac?  It tastes like a Big Mac?  I’m sure if I were that guy who eats multiple Big Macs every day, it would have blown my mind with all the little differences.  But it’s been a year or two since I’ve had one.  It tasted exactly the same to me. 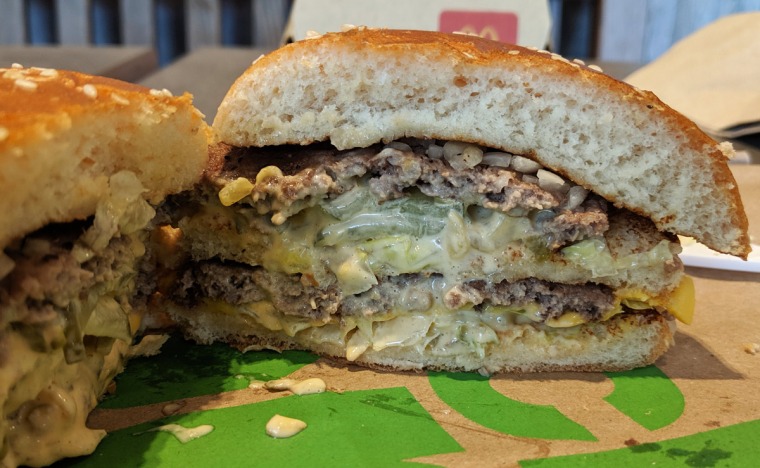 Actually, that’s not entirely true — it’s clearly saucier.  The amount of sauce is kind of insane.  It oozes out of the burger with every bite.  It’s a mess.

Obviously the dry, mostly tasteless McDonald’s patties need a lot of help (and no, they are absolutely not juicier in any discernible way).  But even still, this was overkill.

The only other change that stood out were the onions; you could tell just by looking at them that they had been put on the griddle.  They had a bit of colour to them.  But if that made any particular difference to the flavour, I certainly couldn’t tell.

Still, it wasn’t bad.  I liked the Big Mac before, and I like it now — but I guess I prefer the old version, because the amount of sauce on the new one is bonkers.

4 thoughts on “The New “Hotter and Juicier” Big Mac”