The Food District in Square One is the latest in the recent trend of upmarket food courts that have been popping up throughout the city.  This is one of the more delightful food trends of late.  All the convenience of a food court, but with above average food?  Yes please.

Or is it above average?  Maybe not.  Enter: Seed to Sausage Meatery, which has an “award-winning” Montreal smoked meat sandwich on their menu (though the menu isn’t forthcoming on what this mysterious award might actually be).

Award-winning or not, I can’t say no to a smoked meat sandwich. 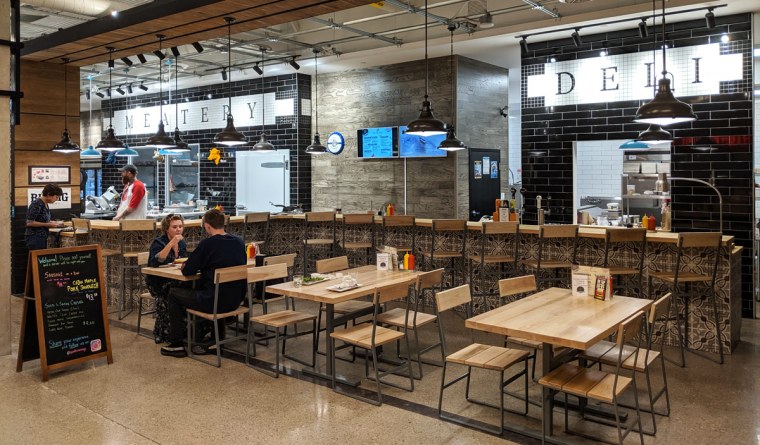 Alas, it’s not great.  The meat is very thinly machine-sliced; normally I prefer the more satisfying thickness of hand-cut meat, but in this case, that just isn’t possible.  If you sliced this meat too thickly, it’d be like trying to eat your belt.  It would be completely inedible.

It’s tough.  The fat is just barely rendered, and the meat is dry and sinewy and difficult to bite through.  And yet somehow, it’s absolutely dripping with grease.  It might be the greasiest smoked meat sandwich I’ve ever had.  The grease soaked through the bread and turned it into mush in parts.

It’s too bad, because the flavour is actually pretty good.  It’s a touch too salty, but it’s nicely spiced and has a mild but satisfying smokiness.  And the fresh, tasty bread was way above average — it was the best part of the sandwich by far.  So there’s definitely potential there.

I got a salad on the side instead of fries, which was clearly a mistake.  I went with the field greens salad, which comes with a vinaigrette that’s so intensely sweet you could put it on ice cream.  Remember Tahiti Treat?  I hadn’t thought about that soda in years, but as soon as I tried the dressing here, I flashed right back.  That’s how sweet it was.

It’s technically food court fare, so at least if the meal had been cheap, it might be possible to overlook some of its issues.  It isn’t; it’s $15.95 for the sandwich and one side, which makes it more expensive than unambiguously superior restaurants like Centre Street Deli and SumiLicious.