Over the last several years, Toronto has seen an explosion of restaurants serving ramen ( a ramenaissance, even?  No?  That’s the worst and I should delete this blog immediately?  Fair).

Despite this, Mississauga remains almost entirely sad and ramenless.  There’s Kenzo, and… that’s about it.  Kinton opening a location here is kind of a big deal.

Their grand opening is today, and to celebrate, they’re offering 50% off all of their ramen.  I showed up a few minutes after they opened, and not surprisingly, the line-up outside was intense.

It’s a nice day, so I figured sure, why not?  It’s been a while since I’ve had the ramen at Kinton, but my recollection was that it was some of the best in the city.

About 40 minutes later, I had a steaming bowl of original shio (salt) ramen with pork.

First, the good: the noodles were great.  You can choose between thick and thin; I went with thick, and they were top-notch.  They had just the right amount of heft, with a nicely firm, springy texture.  I saw some people eating the thin noodles, and they looked way too delicate.  Thick is clearly the way to go. 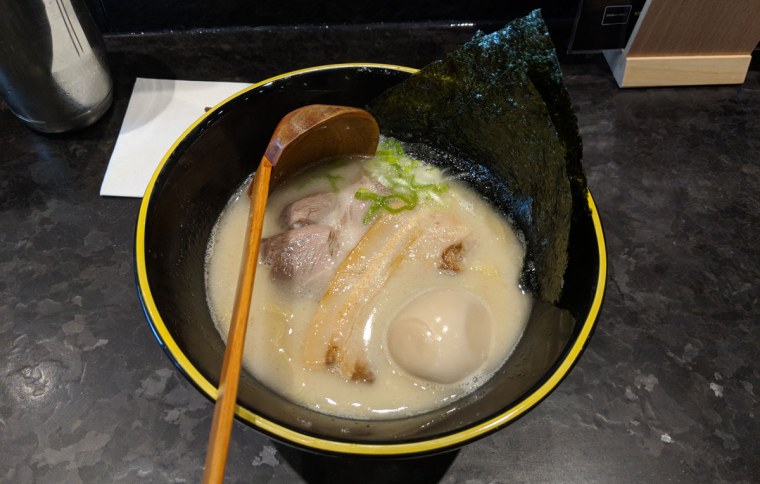 The pieces of pork were also exceptional; they were super tasty and melt-in-your-mouth tender.  And while the egg wasn’t great (it was undercooked and runny), it was also quite tasty.

Alas, great noodles and pork does not a great bowl of ramen make.

The broth — a.k.a. the heart and soul of a bowl of ramen — was lacking.  Kinton serves tonkotsu ramen, in which pork bones are boiled down for hours and hours until you get a thick, creamy broth.  And they had obviously done something right: the rich broth was indeed thick and creamy.

But the flavour just wasn’t there.  It was bland.  It wasn’t bad at first, but the deficit of taste gets more and more blatant as you go, and by the end of the bowl I was sick of eating it.  I actually left some soup in my bowl, which I pretty much never do.  Not because I was full, but because it was getting monotonous.

The thing about a great bowl of ramen (or even just a good one) is that every mouthful seems to unlock something new; it’s like a symphony of flavours.  Meanwhile, the bowl at Kinton was more like one sad tuba.

It’s literally their first day in existence, so it’s possible that they’re just working out the kinks — but since they’re a chain with nine other locations, I have my doubts.

3 thoughts on “Ramen Disappointment at Kinton”