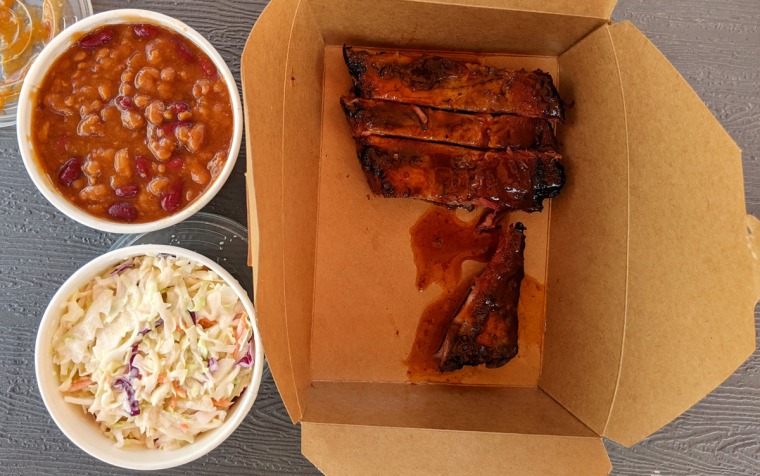 Brickyard BBQ is a ribfest vendor with a permanent location (or semi-permanent at least — I can’t imagine they’ll still be around once winter hits), so if you’re in the mood for a mini ribfest experience, it should hit the spot.  There’s even a Tiny Tom’s truck parked across from it, but alas, it was closed when I visited.

They have the usual assortment of ribs, pulled pork, and chicken, though ribs are obviously their specialty (they have a huge sign boasting about their “legendary ‘double-smoked’ ribs”).  I ordered a third rack with coleslaw and baked beans on the side (rice and peas is also a choice). 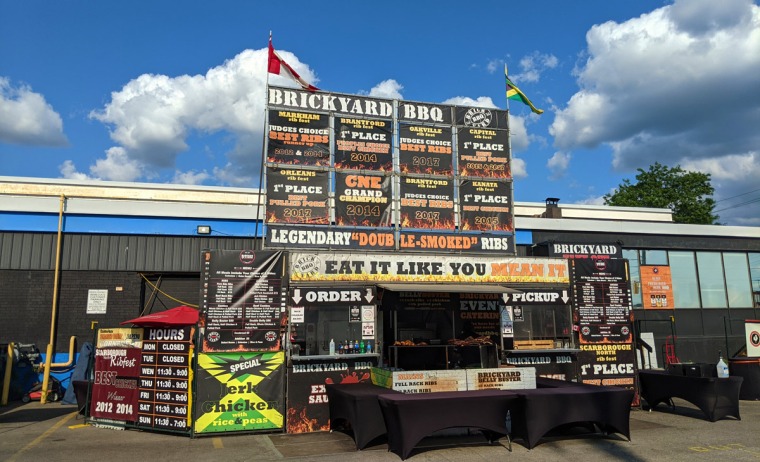 It was fine.  I’ve never had ribs from a ribfest that particularly blew me away, and these were far from the best ribfest ribs I’ve had (how many times can I say ribs in a sentence??  Ribs ribs ribs).  They weren’t smoky at all, and they had a mildly leftovery flavour, but mostly they were decent enough.  The texture was okay, with a nice bite that wasn’t overly tough.

The most noteworthy thing about them was the sauce they had slathered them in — the spicing was quite unique, with a really distinctive flavour that was unlike any BBQ sauce I’ve had before.  It’s different enough to be off-putting at first, though it mostly grew on me.

As for the sides, the baked beans had the same distinctive flavour as the sauce, but were otherwise quite good — hearty and not too sweet.  And the coleslaw, oddly enough, was the highlight.  It’s a pretty by-the-numbers creamy coleslaw, but it’s well executed and tasty (hey, not every dish needs to reinvent the wheel).