Let’s get the obvious out of the way first.  This place is called Matty’s Patty’s, but should clearly be called Matty’s Patties.  Apostrophes: they’re not that complicated!  Maybe spend the five minutes it would take to figure out how they work before you name your restaurant?

You might argue that the name is wrong on purpose because it looks better, since both words are so similar, to which I would reply that no, you need to get out of here with that.  That’s BS and we all know it.

You might also argue that no one cares, and that maybe I should be talking about the food, since that’s the point of this whole thing.  And yeah, that’s fair.

The food is fine!  They have two main things on the menu: “Matty’s,” which is a hefty seven ounce burger that comes with mustard sauce, pickles, and onion.  I tried this about a year ago, when this blog was on hiatus, and enjoyed it.

The other thing on the menu is “Patty’s,” which is a more traditional griddle-smashed cheeseburger that you can get as a single, a double, or a triple (a vegetarian version made with Impossible Meat is also an option).  This one comes topped with either Matty’s Patty’s sauce, pickled jalapeno mayo, or spicy ketchup sauce.  I went with the single and had it topped with pickled jalapeno mayo. 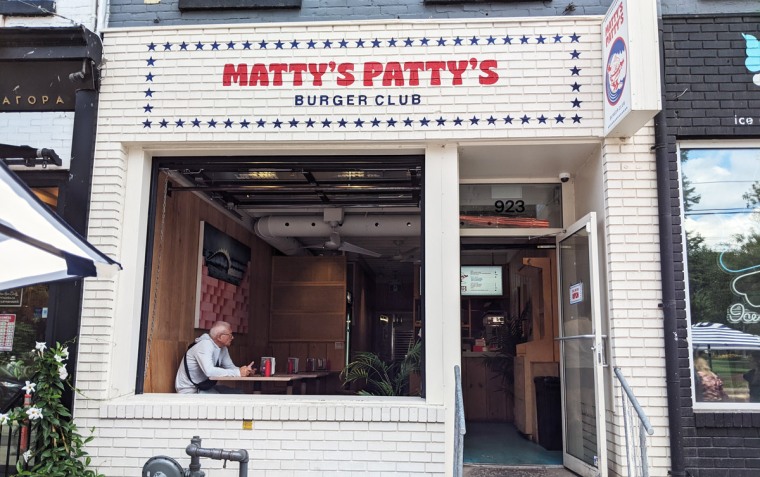 It’s pretty decent.  Nothing about it blew me away, but the patty has a very mild beefy flavour and a nice texture thanks to the course grind.  It could stand to be beefier and juicier, but you could absolutely do worse.

The pickled jalapeno mayo mostly just tasted like a slightly zingier version of regular mayo, which is too bad because the burger really needed something a bit more acidic to cut through the richness of the gooey cheese and the patty.

The bun was probably the highlight, oddly enough.  It was super soft, squishy, and fresh, with just the right amount of heft to stand up to the patty.  It kinda reminded me of the potato rolls that have become so popular in the GTA, but better.