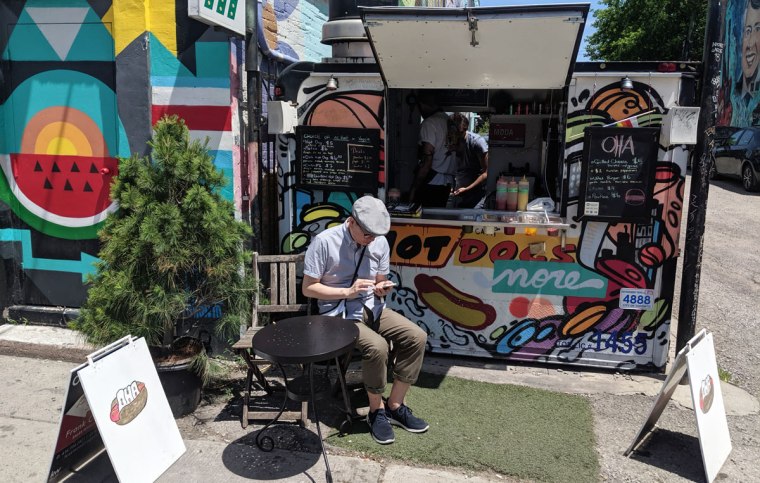 Kung Fu Dawg set up shop in a little stand on Ossington last year, and they served up some pretty tasty dogs.  Alas, that was a short-lived endeavor; they’ve been replaced by OHA, which describes themselves as a purveyor of “Turkish fusion street food.”

It’s mostly a hot dog stand, however.  They have a grilled cheese sandwich and something called a “wet burger” on their menu, but they otherwise serve a variety of hot dogs.

I got the OHA Hot Dog, which comes topped with potato salad and tomato sauce.

It’s a tasty dog.  Though it lacks Kung Fu Dog’s nice snappy bite, the all-beef hot dog has a nice meaty flavour and a satisfying smokiness.

It’s topped with a thin tomato sauce that packs a decent amount of tomato flavour (I assumed this would be ketchup-esque, but it’s not particularly sweet or vinegary) and a variation on potato salad called Olivier salad.  Potato salad sounds like an odd topping, but its zesty creaminess actually works quite well with the salty and smoky hot dog.