I’ve had a lot of noodles over the course of my life, but — until now — I don’t think I’d ever tried potato noodles.

As the name implies, potato noodles are made with potato starch, which gives them a much, much chewier consistency than the norm.

Though I’ve heard good things about the cold noodles Potato Noodle Soup of Bai, I decided to go with the noodle soup — mostly because “noodle soup” is right there in the name.

I got the plain potato noodle soup, which comes with noodles, meatballs, fish balls, half an egg, and various odds and ends in a fiery broth.

The noodles are really interesting.  There’s a Korean dish called jjolmyeon that features noodles that are so incredibly chewy you have to cut them with scissors before you start eating.  These kind of reminded me of a thicker, slightly less chewy version of those. 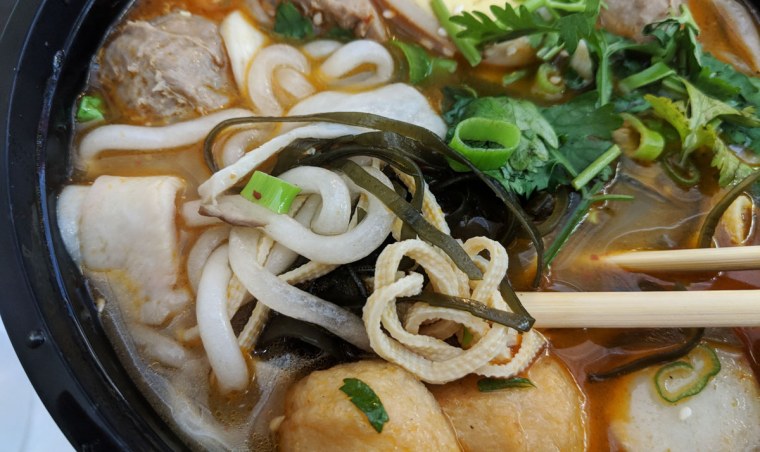 The broth was a bit saltier than I’d like, but it was otherwise quite tasty, with a spicy kick and an almost creamy richness that you only get from a stock that’s been simmered for a long, long time.

The whole thing was fairly tasty, though with Sun’s Kitchen just a few steps away, I don’t know that I’d ever eat here again.