A&W recently added a Beyond Meat burger to its menu; the company that makes these things calls them “the future of protein,” and word on the street is that it tastes surprisingly close to the real deal.

Veggie burgers that try to emulate actual beef are pretty much always disgusting (case in point: Doomie’s, a restaurant that actually specializes in vegan food but still manages to serve a vegan patty that tastes like pure, distilled sadness), so I was curious, but my expectations were about as low as it gets.

Well, maybe that helped, because the Beyond Meat burger?  Not terrible!

I know, “not terrible” isn’t exactly high praise, but since I was expecting this to be an all-out disaster, I’m going to chalk that up as a win.

The biggest giveaway that this isn’t an actual hamburger is the texture — though it’s vaguely meaty, it’s also off-puttingly mushy.  But it wasn’t dry or rubbery, so it certainly could have been worse. 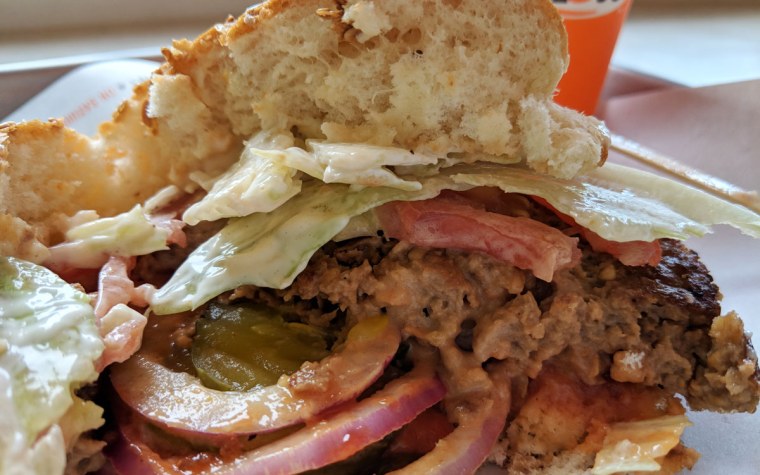 (Yeah, I completely mangled the hamburger — it turns out wooden coffee stir-sticks are an absolutely horrible implement to cut a burger in half.  Lesson learned!)

The taste was a bit better than the texture.  It wasn’t beefy at all — but then the actual beef at most fast food joints doesn’t have a particularly beefy flavour.  The flavour is sort of generically meaty in a way that’s not great, but also not altogether unpleasant.  The burger is absolutely doused in ketchup, mustard, and mayo, which helps make it more palatable.

It probably isn’t going to fool anyone other than longtime vegetarians who have forgotten what a burger tastes like, and I don’t think I’d ever order it again, but I was still impressed at how non-gross it was.  I’d easily take it over the actual beef burgers at really bottom-of-the-barrel places like Hero Certified Burgers or Burger King.