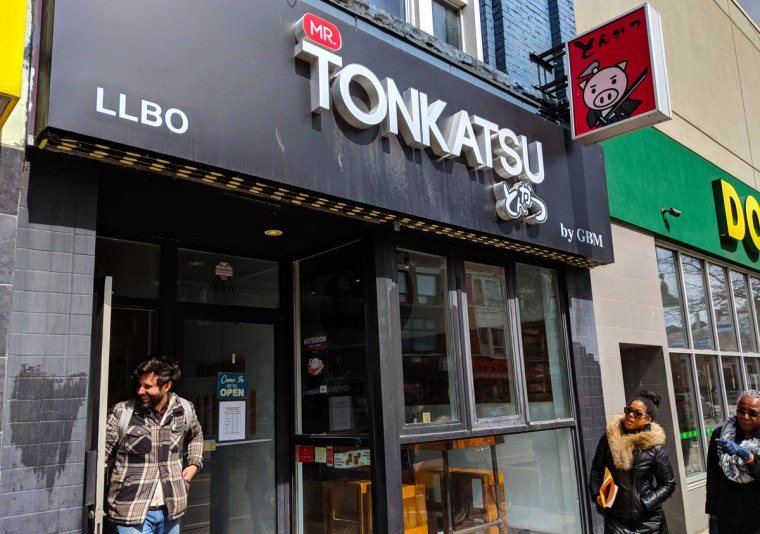 Tonkatsu is one of those dishes that’s very difficult to dislike.  You can coat pretty much anything in panko breading and then deep fry it, and that thing is going to be tasty.  A fried, panko-breaded pork cutlet?  Served with rice and a delicious dipping sauce?  Yeah, it’s hard to go wrong there.

And while Mr. Tonkatsu doesn’t serve the best tonkatsu I’ve ever had, they certainly do a solid job with it.

They have a couple of different pork options on the menu — loin and tenderloin, with the latter being an extra dollar.  I went with loin, which comes with a bowl of rice, tonkatsu sauce, shredded cabbage, and miso soup.

The panko breading on the tonkatsu had an absolutely perfect texture — it was golden and lightly crispy, with just enough heft to make its presence known, but not enough to overwhelm the meat.  But it was way underseasoned; it was actually pretty bland.

Thankfully, the tonkatsu sauce very thoroughly solves that problem.  I normally like that stuff — it’s kind of like a Japanese take on HP sauce — but the version here was something special, with way more complexity than the norm.

It’s good that the sauce was so delicious, because the meat needed a lot of it.  Aside from the distinct lack of flavour, the pork itself was overcooked and extremely dry.  A prodigious application of the tasty sauce goes a long way towards fixing those problems, but they are problems nonetheless.

Everything else was quite good.  The dressing for the cabbage was the usual sesame-infused concoction you’d expect; it was quite satisfying.  And the miso soup had a mildly fishy funk that I found to be delightful.