I watch a ridiculous amount of Diners, Drive-ins and Dives.  It isn’t often that I go to a restaurant that feels like it would fit in on that show (we just don’t seem to have a lot of restaurants like that in the GTA).  But Guy would be right at home at the Diner House 29 in St. Catherines.

There were a few things on the menu that caught my eye, but I went with Porky’s Revenge: “Roasted Pork Belly on a Toasted Bagel Bun with 2 Fried Eggs, House-made Onion Chutney,  Niagara-Peach Mayo & Monterey Jack.”

Pork belly is one of those trendy ingredients that’s popped up on pretty much every menu over the last several years.  But I still have a hard time saying no to it.

And the version here is good.  I have a friend who teases me over the use of the word “unctuous,” because it’s one of those words that really isn’t in a normal person’s vocabulary.  It’s pretty much exclusive to food nerds/writers/bloggers (see also: mouthfeel).

That being said, this sandwich was unctuous AF.  Between the rich, fatty pork belly, the runny yolk from the eggs, the mayo, and the gooey cheese, the sandwich screams unctuous.  There’s really no other word to describe it.

And yet it wasn’t too rich.  The sweet chutney helps to balance things out, and the flavours all work so well together that it never seems one-note.

The bagel bun was quite dense, with a very crispy exterior.  It would have been too much for your average sandwich, but there was so much going on here that the hearty bun was just right.

My biggest issue is that the sandwich is so overstuffed and slippery that as soon as I picked it up, it immediately started to fall apart.  I panicked, took a quick bite, then set the sandwich down and proceeded to eat the rest with a fork and knife. 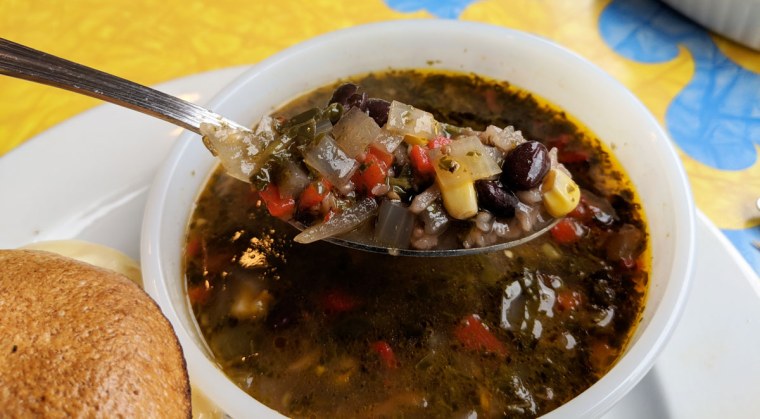 The sandwich comes with a salad, soup, or potatoes on the side.  I got the rice, beans, and pesto soup; it was absolutely crammed with stuff and had a satisfying pesto flavour.  It was hearty and tasty.