I was afraid it might have gone downhill.  It’s an outstanding sandwich, but many successful restaurants have a hard time maintaining consistency over the years, and eventually become a victim of their own success.  This is especially true once expansion becomes a factor.

Well, I’m happy to say that this doesn’t seem to be an issue here.  The porchetta sandwich: still outstanding. 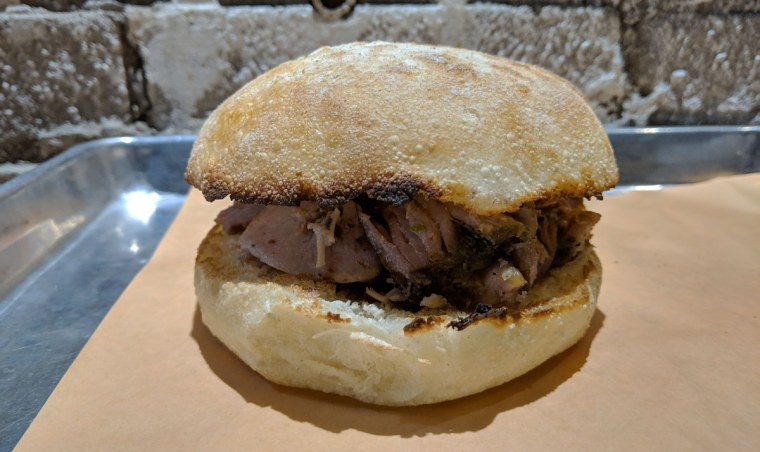 I didn’t see any crackling when I opened it up, which concerned me.  But I guess it was all hiding under the meat, because there was a pretty good amount.  (I could have used more, but then it’s basically impossible to get enough crackling.  I could have an all-crackling sandwich, and I’d still be like “that was pretty good, but it needed more crackling.”)

I also thought the sandwich looked a little lean on first inspection, but again, it was all hiding in there; the meat was super tender, with a perfect amount of tasty fat interspersed throughout.

It’s a seriously, seriously great sandwich.  The crispy, fluffy bun is as perfect as ever, and the pork itself is still top-notch.  The spicing is subtle compared to some porchetta, but there’s more than enough for it to pack some serious flavour.  That’s not to mention that the milder seasoning allows the natural flavour of the pork to really shine through.

You can get all kinds of toppings, if you want — in fact, the “House Special” is topped with parmesan, truffle sauce, mustard, and hot sauce.   And certainly, it’s not un-tasty.  But all that stuff is superfluous, and worse, it just gets in the way of the amazing pork.  The porchetta is so tender, porky, and herby; obscuring it with additional sauces and flavours just seems like a shame.

The dish I ordered at Origination Noodle House turned out to be basically the exact same one I had at Dagu Rice Noodle.  I probably should have realized that it was the same dish, but it didn’t occur to me until I actually started eating.

It was fine.  I wasn’t crazy about it at Dagu Rice Noodle, and I was similarly unmoved by its charms here. 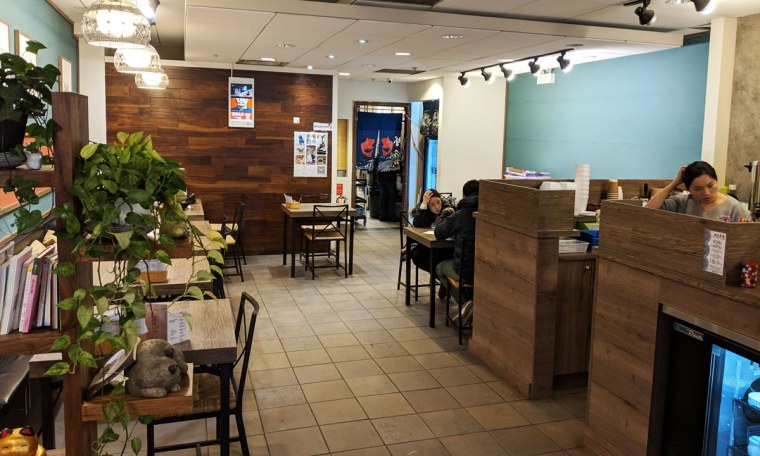 The presentation was interesting.  It’s basically a bowl of noodle soup that features thick rice noodles along with various meats and veggies in a basic (and bubbling hot) broth.  But at Origination, it comes completely deconstructed. 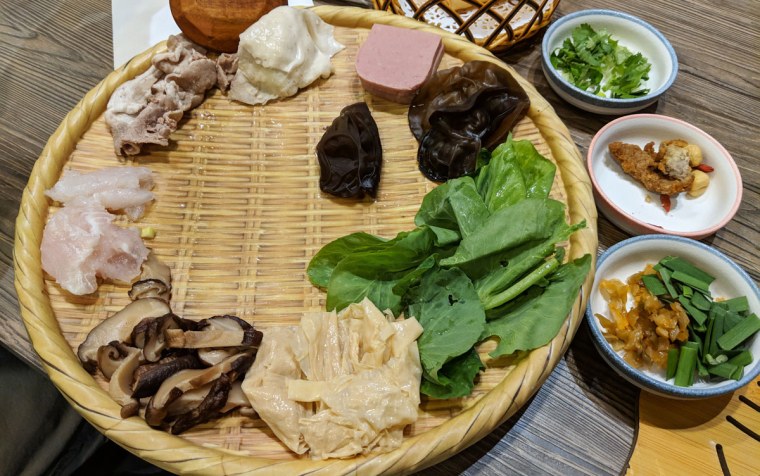 First, they bring you a plate with all of the various meats and vegetables, then they bring a bowl of noodles, and finally, a bubbling hot bowl of broth.  Everything gets dumped into the broth, and you’re good to go.

I think the version at Dagu Rice Noodle was slightly better, if only because the meat (and the tender pork in particular) was more satisfying.  It was otherwise very similar: chewy rice noodles, veggies of various textures that all taste about the same, and a simple broth that practically demands a very liberal application of chili oil.

Like at Dagu, I didn’t dislike eating it, but I can’t say I’m in any particular rush to have it again. 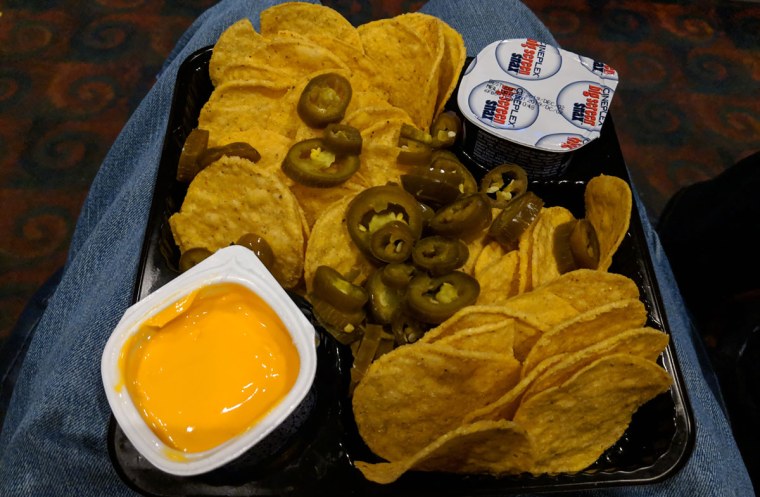 I actually used to really like the nachos at Cineplex!  They’re junk, but tasty junk.  Or at least, they were.

I haven’t had them in ages, but I feel like they used to be way better.  Maybe I’m crazy.

The nacho cheese sauce used to be salty goo that had almost no resemblance to anything even close to real cheese — and yet there was something oddly satisfying about it.

I’ll admit that it’s quite possible I’m just getting snobbier, but the nachos lacked the junky joys of their previous self.

It probably doesn’t help that the cheese comes in pre-filled containers that are too small to dip chips into.

Seriously, who designed this??  Why not make the cups slightly shorter and wider?  It’s a definite “you had one job” situation.

Even outside of the hilariously ill-conceived containers, the cheese itself seemed less salty, and like it was actually trying to resemble real cheese.  But it did this extremely poorly, so you wind up with something with a neither-here-nor-there flavour that’s bland and unsatisfying.

The chips themselves are exactly as I remember them, at least.  They’re not great (and they always taste vaguely stale), but they’re crunchy and satisfying.

The jalapenos are the clear highlight.  I love pickled jalapenos, but when you buy them at the supermarket, they’re inevitably mushy, with a disappointingly mild level of spice.  These ones have a great crunch and a decent amount of heat.  They take something that would otherwise be mostly inedible and make it tolerable.

They sell Taiwanese-style wheel cakes at Formocha (which are essentially pancakes that are cooked in a circular mold with a sweet filling) and they’re mostly pretty good.  But there are a couple of issues.

The first (and biggest) issue?  Red bean wasn’t a filling choice, at least when I went.  I’m sorry, but I’m going to have to deduct about a million points for its absence.  I mean, come on.  It’s the classic filling.  Red bean or GTFO.

I wound up trying custard, and Oreo custard.  They were both tasty enough, but (and here’s the second issue) the custard tasted off.  There was something weird about it, with an almost fruity flavour that was vaguely off-putting.

The Oreo was much better — rather than the chunks that you might expect, it was filled with an entire cookie, which was surprisingly delightful.

Plus, the cakes themselves were super fresh (they cook them to order), with a slightly crispy exterior and a fluffy interior.  They were good, but… come on.  Red bean.  Give it to me.

The ramen at Touhenboku is a little bit different than the norm.  Most of the ramen shops in Toronto serve tonkotsu-style ramen, in which pork bones are boiled for hours and hours until you wind up with a very rich, porky broth.

Touhenboku, on the other hand, subs out the pork for chicken, and yet still manages to retain that intense richness that you associate with tonkotsu.

If your average bowl of chicken soup is the soup equivalent of white meat (lighter, with a more restrained flavour) then what they’re serving at Touhenboku is more like dark meat, with a really intense flavour and a fattier texture.

In fact, the soup might be a bit too fatty, with a heavy oiliness that’s borderline too much.  I’m certainly not going to complain about a very rich bowl of ramen, but this one was slightly too greasy.

I ordered the sea salt ramen (a.k.a. shio ramen) from the “Tomo’s favourite” section of the menu.  It’s a pretty standard bowl, with the usual assortment of veggies, an egg, and chasu.

It’s (mostly) quite good.  The noodles were a bit too thin (thick is also an option, however — I think that’s the one to go with), and the flavour was slightly one-note in its rich chickeniness (chickeniness… that’s a word, right?), but it was a satisfying bowl of soup. 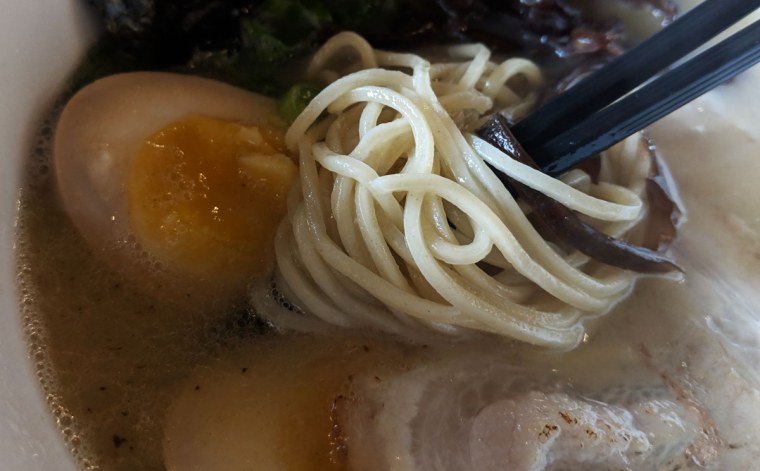 Most notably, the very intense chicken flavour is pretty remarkable, and the thinly sliced chasu was ultra-tender and perfectly seasoned, with a great porky flavour.  The egg was also perfectly cooked, with a great gooey yolk, so there’s definitely more good here than bad.